Xdebug and You: Why You Should be Using a Real Debugger — Juan Treminio — Dallas based senior web developer. In my Setting Up a Debian VM, Step by Step tutorial I showed you how to install and enable Xdebug on a VM but I didn’t really explain what Xdebug is, why you should use it, or how to actually begin working with it. 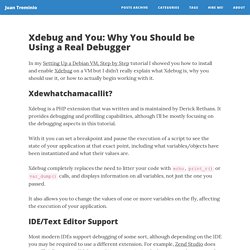 Xdewhatchamacallit? Xdebug is a PHP extension that was written and is maintained by Derick Rethans. It provides debugging and profiling capabilities, although I’ll be mostly focusing on the debugging aspects in this tutorial. With it you can set a breakpoint and pause the execution of a script to see the state of your application at that exact point, including what variables/objects have been instantiated and what their values are. Xdebug completely replaces the need to litter your code with echo, print_r() or var_dump() calls, and displays information on all variables, not just the one you passed. It also allows you to change the values of one or more variables on the fly, affecting the execution of your application. Kom igång med objektorienterad PHP-programmering på 20 steg. MAMP & MAMP PRO: Using MySQL command line with MAMP. PMWD5E/vieworders.php at master · lauraxt/PMWD5E. Webbguider - Start. Need a web developer? Hire me! — Juan Treminio — Dallas based senior web developer. 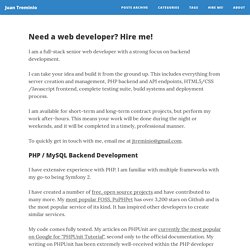 Hire me! I am a full-stack senior web developer with a strong focus on backend development. I can take your idea and build it from the ground up. This includes everything from server creation and management, PHP backend and API endpoints, HTML5/CSS/Javascript frontend, complete testing suite, build systems and deployment process.

I am available for short-term and long-term contract projects, but perform my work after-hours. To quickly get in touch with me, email me at jtreminio@gmail.com. Launch the PHPStorm Remote Debugger from a PHPUnit Test – Stephen Rhoades. I recently downloaded the trial version of PHPStorm 6 and was exploring how I could initiate the debugger while running a command-line unit test, having the capability of debugging code while unit testing is a necessity for me. 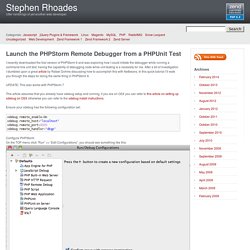 After a bit of investigation I stumbled upon a great article by Rafael Dohms discussing how to accomplish this with Netbeans. In this quick tutorial I’ll walk you through the steps for doing the same thing in PHPStorm 6. Artiklar - Introduktion till objektorienterad programmering. I denna artikeln får du lära dig vad objektorienterad programmering är och grunderna i det. 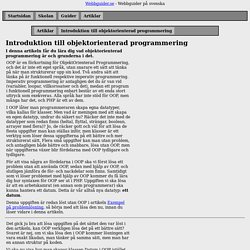 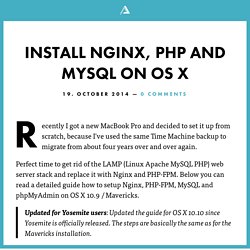 Perfect time to get rid of the LAMP (Linux Apache MySQL PHP) web server stack and replace it with Nginx and PHP-FPM. Below you can read a detailed guide how to setup Nginx, PHP-FPM, MySQL and phpMyAdmin on OS X 10.9 / Mavericks. Updated for Yosemite users: Updated the guide for OS X 10.10 since Yosemite is officially released. The steps are basically the same as for the Mavericks installation. (Re)installing PHP on Mac OS X — justin hileman dot info. GitHub - Homebrew/homebrew-php: PHP macOS formulae for the Homebrew package manager. Install and run PEAR on OSX 10.11 El Capitan. PEAR is a popular PHP package manager, it doesn’t come by default on OSX, here is a tutorial how to install PEAR on OSX 10.11 El Capitan and earlier versions of OSX including Yosemite and Mavericks. 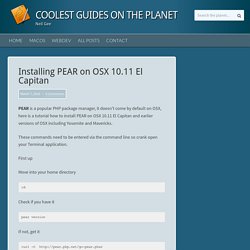 These commands need to be entered via the command line so crank open your Terminal application. How to setup a local server (in a virtual machine) with Vagrant in PHPStorm - Dev Metal. The Joy of Regular Expressions [1] Was asked recently if I knew of any good regular expressions tutorials (preferably in PHP). 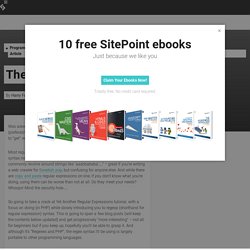 There's rarely a quiet night in with me, tonight I upgraded my local box to PHP7 (so I don't need to use VM's or docker containers). 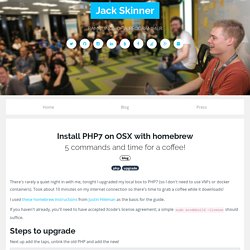 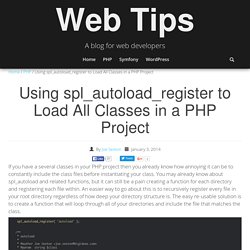 You may already know about spl_autoload and related functions, but it can still be a pain creating a function for each directory and registering each file within. An easier way to go about this is to recursively register every file in your root directory regardless of how deep your directory structure is. The easy re-usable solution is to create a function that will loop through all of your directories and include the file that matches the class. Webbprogrammering och Databaser. Kom igång med SQLite och PHP PDO. Why you Should be using PHP's PDO for Database Access - Tuts+ Code Tutorial.

Many PHP programmers learned how to access databases by using either the MySQL or MySQLi extensions. 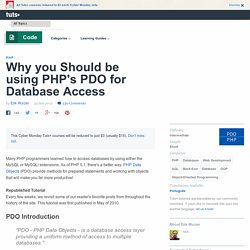 As of PHP 5.1, there's a better way. PHP Data Objects (PDO) provide methods for prepared statements and working with objects that will make you far more productive! GitHub - Kroc/PHPtitleCase: An improved Title Case Function for PHP based on John Gruber and David Gouch’s work. Improved Title Case Function for PHP. John Gruber originally made available his script to Title Case text, working around the fringe-cases. From this, a number of ports were made of the script of which particularly noteworthy David Gouch’s Javascript port that was smaller, simpler and handled more fringe cases.

I’ve ported this to PHP and put it to use on this site. My version is based on David Gouch’s Javascript port, unlike the WordPress port which is, frankly, crap. Ironically, now there’s a WordPress port that uses my port. The circle is complete! Code below. Anything broken, please let me know. How to Use PHP Namespaces, Part 1: The Basics. Namespaces are one of the most significant changes in PHP 5.3. They will be familiar to C# and Java developers, and they are likely to change the structure of PHP applications for the better.

Why Do We Need Namespaces? As the size of your PHP code library increases, the more likely you will accidentally reuse a function or class name that has been declared before. The Definitive Guide To PHP's isset And empty. PHP has two very similar functions that are essential to writing good PHP applications, but whose purpose and exact function is rarely well explained: isset and empty. The PHP manual itself doesn't have a simple explanation that actually captures their essence and most posts written around the web seem to be missing some detail or other as well. This article attempts to fill that gap; and takes a broad sweep of related topics to do so. » PHP Constructor Best Practices And The Prototype Pattern Ralph Schindler. If your knowledge of constructors ends with “the place where I put my object initialization code,” read on.

While this is mostly what a constructor is, the way a developer crafts their class constructor greatly impacts the initial API of a particular class/object; which ultimately affects usability and extensibility. After all, the constructor is the first impression a particular class can make. Constructors, in their current form, have been in PHP since 5.0.0. Previous to 5.0, PHP loosely followed the style similar to that of C++ where the name of the method matching the name of the class would act as the class constructor.