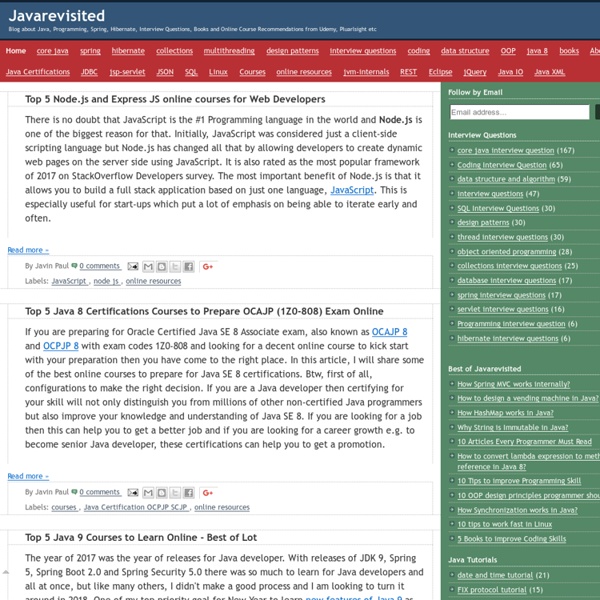 Generifying your Design Patterns -- Part I: The Visitor Generifying your Design Patterns Part I: The Visitor by Mark Spritzler In the upcoming months, I will be writing a series of articles on Generifying your Design Patterns. We will look at a number of Design Patterns from Singleton, Factory, Command, Visitor, and the Template Method. We will see what we can possibly gain from using generics in our design patterns and how to create them. Some patterns work well with generics, and some just don't make sense. Well, you could argue that none of them make sense. To start off, I have chosen the Visitor pattern, since this is the first one that I attempted to generify. A generic look at Generics So let's start by looking at generics and how to make a class generic. Generics are a way to create a template of your class and allow actual implementations of your template to be type safe. public class MyClass<A, B, C>{} You can use any letters you like. Now, in your class code you can use the letters in place of actual Classes. Erasure An example

Announcing .. Gradle Tutorial Series | iRomin Welcome to a new blog series where I aim to cover the basics of Gradle, the build tool that not just everyone is talking about but adopting widely. Companies, small and large have adopted this tool and while you might be familiar with Ant and Maven, it is time to take a look at Gradle. The need for writing this series has come about primarily due to my work with a few Google related technologies/frameworks. My first experience with Android Studio and Gradle was one that cannot be described. The series will be more task focused with just enough explanation for you to understand what is going on behind the scenes. This tutorial series will take you to a journey that covers the following: Some of these parts could go over into multiple parts, but at a high level, this is what I plan to cover. To all Java Developers out there, lets rock the Gradle ! Like this: Like Loading... Google Developer Expert Cloud 2014.

Jepp - Java Embedded Python Lesson: Generics (Updated) (The Java™ Tutorials > Learning the Java Language) In any nontrivial software project, bugs are simply a fact of life. Careful planning, programming, and testing can help reduce their pervasiveness, but somehow, somewhere, they'll always find a way to creep into your code. This becomes especially apparent as new features are introduced and your code base grows in size and complexity. Fortunately, some bugs are easier to detect than others. Generics add stability to your code by making more of your bugs detectable at compile time. WildFly Homepage · WildFly Multithreading Programming Tutorial Java is amultithreaded programming language which means we can develop multithreaded program using Java. A multithreaded program contains two or more parts that can run concurrently and each part can handle different task at the same time making optimal use of the available resources specially when your computer has multiple CPUs. By definition multitasking is when multiple processes share common processing resources such as a CPU. Multithreading enables you to write in a way where multiple activities can proceed concurrently in the same program. Life Cycle of a Thread: A thread goes through various stages in its life cycle. Above-mentioned stages are explained here: New: A new thread begins its life cycle in the new state. Thread Priorities: Every Java thread has a priority that helps the operating system determine the order in which threads are scheduled. Java thread priorities are in the range between MIN_PRIORITY (a constant of 1) and MAX_PRIORITY (a constant of 10). Step 1: Step 2: Step 3

java - Spring Generic Dao class name Yet Another JUnit Tutorial - JUnit in a Nutshell JUnit seems to be the most popular testing tool for developers within the Java world. So it is no wonder that there have been written some good books about this topic. But I still meet quite often programmers, who at most have a vague understanding of the tool and its proper usage. Hence I had the idea to write a couple of posts that introduce the essential techniques from my point of view. Instead there are pointers to in depth articles, book chapters or dissenting opinions for further reading whenever suitable. So despite of the existing books and articles about testing with the tool, maybe the hands-on approach of this mini-series might be appropriate to get one or two additional developers interested in unit testing – which would make the effort worthwhile. Let the games begin! Table of Contents Coverage of various unit test assertion techniques like the built-in mechanism, Hamcrest matchers and AssertJ. Conclusion So thank you for reading that far! Frank Appel fappel@codeaffine.com