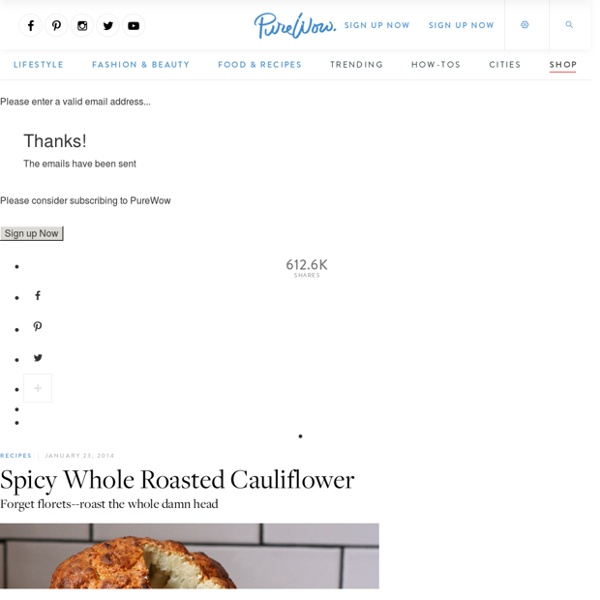 Rockpool's Cream of Cauliflower Soup with Parmesan - Gastromony Cauliflower rocks. My kids love munching on little steamed florets of it and the classic gratin of cauliflower is a venerable side item to accompany any main meal. Unfortunately, half a head of cauli has been about $4 in the supermarkets and not a great deal cheaper at markets. I’m guessing this vege is pretty susceptible to insect infestation (who hasn’t bought a cauliflower that wasn’t home to those tiny bugs) so an edible crop gets pretty pricey. It was therefore almost a shock for me to walk into Coles last week to find a whole head of cauliflower going for $1.80.

Southwestern Black Bean Potato Salad It was blazing hot, and The Spice Hater (aka my daughter E.) was eating dinner with friends. So I seized the opportunity to indulge in a little hot pepper action and mixed up a batch of super-spicy black bean-potato salad and let it marinate in the fridge until very cold. It tasted wonderful to my heat-seeking husband and me. But if you don’t like things quite so spicy, be sure you cut down on the chipotle and jalapeño peppers. Paul Bertolli's Cauliflower Soup recipe on Food52.com Cooking is more fun with friends. Find your friends who are already on Food52, and invite others who aren't to join. Let's GoLearn more Turban Tadka by Master Chef Sanjeev Kapoor. Method Step 1 Grind oats to a coarse powder and put into a bowl. Add gram flour, yogurt, salt and sufficient water to make a batter of uttappam consistency. Step 2

Recipe: Awesome Paleo Zucchini Chips - paleoforeverpaleoforever Sometime ago I put up this recipe for paleo zucchini chips. They are light on the carbs (3.1 grams of carbs for 100g of uncooked zucchini), very healthy and exceptioanlly tasty. A great alternative to our pre-paleo snacks like popcorn and dorritos or whatever snack you binged on before. I have made several batches of them and the picture above is (although not very good) how it turned out for me. I have got a lot of messages and mails about how a lot of batches get burned or soggy or both. After a bit of experimentation I have made some changes to the recipe. Simple Sesame Noodles I’ll be spending the weekend cooking some new recipes and making such a mess of my kitchen I’ll want to cry and burn down the house and move. I’m really looking forward to it! In the meantime, because it’s Friday, I’m bringing this, one of my all-time favorite recipes, up to the front. It’s cool, easy, and the perfect thing to get us through the remaining days of this inferno some humans are referring to as “Summer”.

Classic Potato Latkes: Don’t Mess with Tradition Hanukkah is here! It’s time to cook and eat potato latkes, one of my favorite things at this time of the year. This is the type of recipe where the classic, bubbie-style latke holds true, meaning, don’t mess with tradition. The best potatoes to use here are russet, since they fry really well. Most recipes call for matzoh meal, but I just use regular flour which works just as well; you only really need it to hold everything together. If you have a food processor with a grater attachment, use it. Healthier Roasted Gobi Manchurian (Cauliflower in a Spicy Sauce) If you’ve been following my blog for a while, you probably already know that I love Indian flavors. I’ve shared recipes for classics like Dal Makhani (Indian Butter Lentils) and Lamb Tikka Masala, and I’ve also shared a few dishes remade with Indian twists, like Bloomin’ Indian-Spiced Whole Roasted Cauliflower, Indian-Spiced Roasted Potatoes, and Indian-Spiced Cream of Tomato Soup with Whole Wheat Couscous. Today I’m sharing my version of Gobi Manchurian, an Indo-Chinese fusion of battered, fried cauliflower florets in a spicy, sticky sauce that’s commonly eaten in India. I first had it when I was in undergrad school when eating a homemade Indian feast at my friend’s house. Her mom was an amazing cook and although she served many dishes that night, I still remember my first bite of Gobi Manchurian. This dish isn’t something I’ve ever seen on a menu at an Indian (or even a Chinese!)

City Food – Julia Child Cooks Mutton Korma in Farash Khana The great chef’s life in Delhi. [Text and pictures by Mayank Austen Soofi] Meet the Julia Child of Farash Khana, a dilapidated neighborhood in Old Delhi. Black-Eyed Peas Recipe Black-eyed peas are a staple in southern cuisine in the United States. They form the basis for the rice-and-beans dish Hoppin’ John, which is thought to bring luck and prosperity when eaten on the New Year. Not only are black beans a great way to start 2011, they’re healthy and filling. Beans have a lot of fiber and protein, which makes for a hearty vegetarian meal.