Soya Chunks Kebab. Worries Go Down Better with Soup - Album on Imgur. Christine Byrne on Instagram: “Just made bacon out of mushrooms and eggplant, am genuinely shocked by how much I like it. . . . Thinly slice 1 small #ItalianEggplant lengthwise, then cut each slice into long strips about an inch thick. Thinly slice 1 larg. Food.ndtv. Prepare yourself to dive into a world of spice-packed, flavour and fragrance rich Indian food. 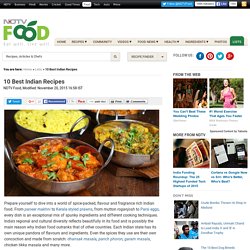 From paneer makhni to Kerala-styled prawns, from mutton roganjosh to Parsi eggs, every dish is an exceptional mix of spunky ingredients and different cooking techniques. India's regional and cultural diversity reflects beautifully in its food and is possibly the main reason why Indian food outranks that of other countries. Each Indian state has its own unique pandora of flavours and ingredients. Even the spices they use are their own concoction and made from scratch: dhansak masala, panch phoron, garam masala, chicken tikka masala and many more. Indian food has a few distinct characteristics that make it 'truly desi'; Its generous use of spices like ajwain, dalchini, cloves, black cardamom, star anise, dhania and tamarind.

It is one of the signature dishes of Kashmir. 2.Butter Chicken - Recipe by R John, Moti Mahal, Daryaganj, Delhi. NDTV.com: Latest News, India News, Business, Cricket, Bollywood, Video & Breaking News. Italian Wonderpot. Last weekend I got an email from Robyn with a link to this really cool recipe over at Apron Strings. 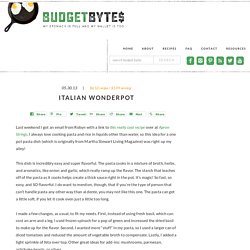 I always love cooking pasta and rice in liquids other than water, so this idea for a one pot pasta dish (which is originally from Martha Stewart Living Magazine) was right up my alley! This dish is incredibly easy and super flavorful. The pasta cooks in a mixture of broth, herbs, and aromatics, like onion and garlic, which really ramp up the flavor. The starch that leaches off of the pasta as it cooks helps create a thick sauce right in the pot. It’s magic! I made a few changes, as usual, to fit my needs. This Is How To Make All The Salsas On The Chipotle Menu. Bahar-e-Kebab. Photo 1 of 12 'Those who start well are already half way.' Appetizers set your taste buds in mood for what lies ahead and Kebabs, they are the perfect hors d'oeuvres. 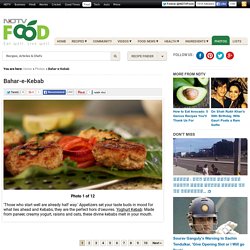 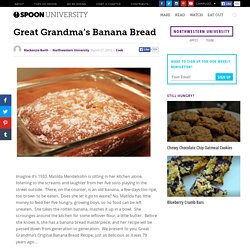 Matilda Mendelsohn is sitting in her kitchen alone, listening to the screams and laughter from her five sons playing in the street outside. There, on the counter, is an old banana, a few days too ripe, too brown to be eaten. Does she let it go to waste? No. Matilda has little money to feed her five hungry, growing boys, so no food can be left uneaten. Chinese Eggplant with Spicy Garlic Sauce. I’m not very creative when it comes to cooking eggplant, usually I poke a few holes with a fork and roast until soft. 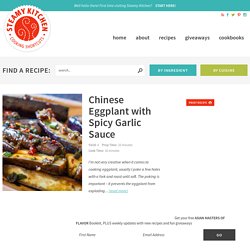 The poking is important – it prevents the eggplant from exploding in the oven. Go ahead, ask me how I know! We grow both Chinese and Japanese eggplant in the garden, both of which are less-bitter than the standard fat Globe variety. I’ve heard cooks needing to “salt” the eggplant and let it sit to release its bitter compounds. 10 Ridiculously Easy And Delicious Soups That Are Perfect For Fall. Turmeric & Saffron: Khoresh Gheymeh: A Traditional Iranian Dish with Meat and Yellow Split Peas.

It's name is "Gheymeh! 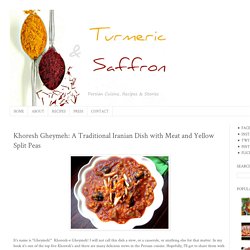 " Khoresh-e Gheymeh! I will not call this dish a stew, or a casserole, or anything else for that matter. In my book it's one of the top five Khoresh's and there are many delicious stews in the Persian cuisine. Hopefully, I'll get to share them with you all, one dish at a time! This is a simple but very tasty dish that, for me, not only satisfies my hunger, but warms my heart and soothes my occasional longing for home, even after all these years. Turmeric & Saffron: Ghormeh Sabzi - Persian Herb Stew. Turmeric and Saffron. Burmese Khow Suey recipe. Please sign in to create shopping lists! 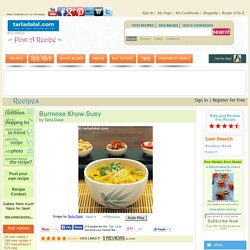 Added to 231 cookbooks This recipe has been viewed 210530 times A vegetarian version of the traditional burmese dish. It is essentially a one-dish meal comprising of noodles in a soup of curried vegetables in coconut milk, served with a variety of contrasting accompaniments. Each of your guests can individually mix the rich array of accompaniments to create their own original taste sensation. The ingredients that make the difference are fried garlic, coriander, lemon juice, fried onions and chillies. Khow Suey (Noodles in a Coconut Curried Sauce) Khow Suey is a Burmese (from Burma) noodle dish with a delicately spiced coconut milk sauce and is served up with an array of different contrasting condiments/toppings that takes this dish to the next level and give it a burst of amazing flavors. 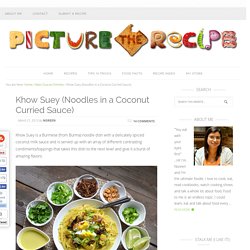 My mom made Khow Suey as a Sunday special family meal when I was growing up and it was easily one of my favorites, still is. I can’t quite pin point what it is about this dish that I love so much, whether it’s the delicate yet creamy coconut milk sauce, the tanginess of the lime you add at the end or the mix of garnishes you put on top…the crispy garlic and onion with the freshness of cilantro and green onion…not to mention the heat when you bite into a sliced chili pepper…..yummm. Tiffin sambar recipe, how to make hotel style tiffin sambar recipe.

Tiffin sambar hotel style recipe with step by step photos – one of the best tiffin sambar recipe i must say. the sambar was damn good with the idlis. oh yes… idli sambar and vada sambar are all time favorite at home. not to forget our love for dosa too. well on this day, i just made idli and not dosa. the sambar recipe was shared by a reader friend priya who writes to me often. she was gracious enough to share her sambar recipe as well as this tiffin sambar. this tiffin sambar recipe is adapted from revathy shanmugam’s recipe and priya was kind enough to translate and send me the recipe. i did make some changes in the recipe though. at the first go, i tried and made the recipe and it was so good, that i did get requests for it to make again. even my house help was so much in awe of the aroma of the sambar masala, that she asked me for the recipe as well as the sambar masala powder. 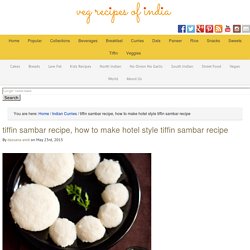 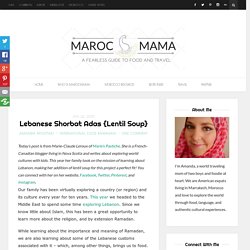 She is a French-Canadian blogger living in Nova Scotia and writes about exploring world cultures with kids. This year her family took on the mission of learning about Lebanon, making her addition of lentil soup for this project a perfect fit! You can connect with her on her website, Facebook, Twitter, Pinterest, and Instagram. Vegetarian Pho Recipe. Simple and Easy to Make Healthy Vegetarian Recipes and Videos. Easy Chicken Stir-Fry Recipe. Worries Go Down Better with Soup - Album on Imgur. Khana Khazana Dec. 13 '09 - Chole Bhature.flv. How to make salt and vinegar seasoning - 93.9 Bay FM Geelong. Ingredients 2 litres white vinegar ½ cup baking soda/bi carb soda Salt Method Place the baking soda into a large deep jug or container. The seasoning can be used on hot chips, homemade potato crisps, popcorn, fish, crumbed chicken, roast chicken, anything that you would like the flavor of salt and vinegar on. Easy cooking (with zoom) - Album on Imgur.

How to make salt and vinegar seasoning - 93.9 Bay FM Geelong. Creamy Tomato Soup with Grilled Cheese "Croutons" The perfect kind of comfort food together in one cozy bowl of soup! I hope you all are recovering from Thanksgiving. I obviously ate way too much than I could actually handle and then had a second round of Thanksgiving leftovers on Friday where we had the most amazing turkey ham sandwiches with cranberry sauce and gravy-drenched boxed stuffing. Yeah, you heard right, boxed stuffing. We all devoured the chestnut-pancetta stuffing that was made for Thursday so we had to resort to Mrs. Cubbison’s classic dressing. Your toast game weak - Album on Imgur. Paris's cheap eats. Vanilla Bean Sables. Slow Cooker Lentil Stew with Polenta.

Slow Cooker Lentil Stew with Polenta. Polenta with Spicy Tomato Lentils. By Sarah on March 4, 2014 I’ve been meaning to make a polenta dish for the blog for almost a year now. Polenta lasagna, polenta pizza, grilled polenta…I’ve had so many ideas just not enough time. If you’re not familiar with it, it’s cornmeal mixed with water, or in this case, vegetable broth. Ten delicious recipes for under 10$! 26 Foods You Should Learn To Cook In Your Twenties. Candy Corn Popsicles - Delicious and Nutritious! - girl. Inspired. It rained here last week.

Deena Kakaya Vegetarian Recipes & Cooking. Somewhere along the journey, the lines between work and play, rest and recreation changed. For most of the years that my husband and I have been together, we shared energy and squinted-eyed enthusiasm for filling our pockets of free time with making memories, having fun, exploring, travelling and being spontaneous in a sensible sort of way. 7 Tantalising Food Blogs We Love. Magic Sauce Recipe. I call this the magic sauce recipe. Flat Abs Diet: 7 Low-Fat Dinner Recipes. The secret to flat abs? Ratatouille a la Remy Recipe - MakeBetterFood.com. Herbed Greek Roasted Potatoes with Feta Cheese Recipe.