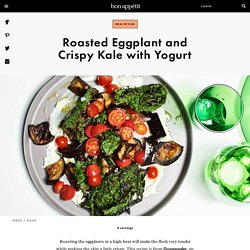 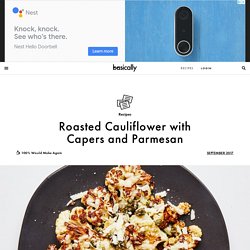 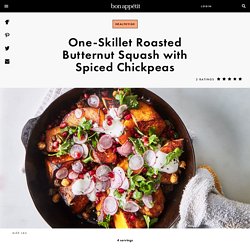 Roast squash directly on oven rack until a paring knife poked through skin easily slides through flesh, 50–65 minutes. Let squash cool until you can handle. Braised and Glazed Radishes, Turnips, or other Root Vegetables. 1. 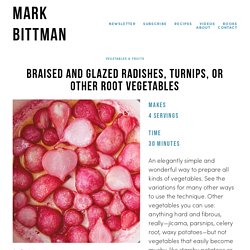 Combine the butter or oil, radishes, and stock in a large saucepan, sprinkle with salt and pepper, and bring to a boil. Cover and adjust the heat so the liquid bubbles gently. Cook until the radishes are tender, 15 to 20 minutes, checking once or twice and adding liquid as needed. 2. Uncover and raise the heat so the liquid bubbles aggressively. Yewande Komolafe's Roasted Root Vegetables with Suya Spice Relish. 1. 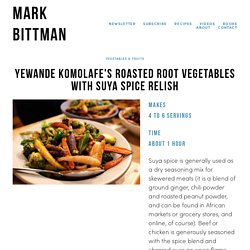 Preheat the oven to 400˚F. 2. Toss the garlic halves, carrots, parsnips and beets with the olive oil and season generously with salt and cracked pepper. Spread in an even layer on 2 baking sheets, being careful not to overcrowd. The Great Indian Curry Hack. Sauteed Baby Bok Choy. Eggplant Meatballs. 1. 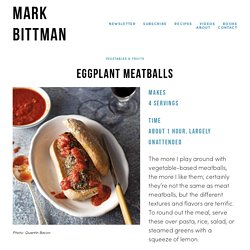 Heat the oven to 375°F. use 1 tablespoon olive oil to grease a large rimmed baking sheet. Put 1 tablespoon oil in a large skillet over medium-high heat. when it’s hot, add the eggplant and 1 ⁄ 4 cup water. sprinkle with the salt and pepper and cook, stirring occasionally, until the pieces shrivel a bit and are tender and beginning to color, 10 to 15 minutes. transfer the eggplant to the bowl of a food processor. 2. Add the remaining 1 tablespoon oil to the pan along with the onion and garlic and return to the heat. Steamed Eggplant (Chinese Style) My easy Chinese style steamed eggplant: silky smooth eggplant drenched a flavorful soy sauce marinade… Winner side dish! 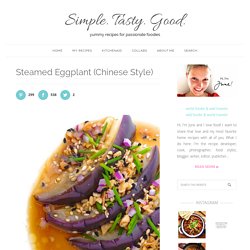 I’m not quite sure how exactly I came up with the idea of preparing steamed eggplant. I think it was after I leafed through a basic Chinese cookbook. Anyway I suddenly realised that there were other ways to prepare eggplant apart from roasting, frying or baking them. I agree, steaming eggplant may sounds pretty bland, but I will show you that it’s far from tasteless if you make a lovely marinade to go with it. Steamed Eggplant, Hunan Style. If you like eggplant, it can sometimes be tricky to find recipes that go beyond the standard fare. 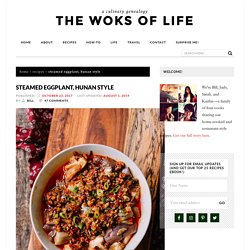 Unfortunately, we rarely came across this dish in Chinese restaurants locally, until recently, when it popped up on the menu of a new Hunan restaurant we tried in New Jersey–still one of the best places to find unexpectedly authentic Chinese food, if you ask us! Flash-Cooked Kale or Collards with Lemon Juice. Spicy Greens With Double Garlic. 1. 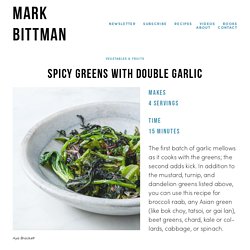 If the greens have thick stems, cut off the leaves; chop the leaves and stems and keep them separate. If the stems are thin and pliable, chop everything together. 2. Put the oil in a large pot over medium-high heat. Mark Bittman’s Mushroom-Nut Burger Will Satisfy Your Umami Cravings. Chinese Cauliflower Stir Fry (干锅菜花) Spicy Eggplant Gratin  Recipe - Chris Behr. Stuck-Pot Rice with Potato Crust — Mark Bittman. 1. 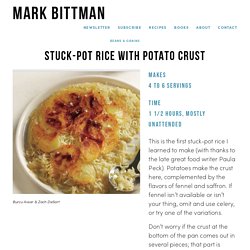 Bring a pot of water to a boil and salt it. Stir in the rice and return to a boil, then lower the heat so the water bubbles along nicely. Cook undisturbed — white rice for about 5 minutes, brown rice for about 15 minutes. Drain and transfer to a bowl. Taste (the rice will be only partially done), add salt if necessary, and sprinkle with pepper. 2. 3. 4. 5. Stuck-Pot Rice with Potato Crust and Lima Beans Use 2 tablespoons chopped fresh dill or 1 tablespoon dried dill instead of the saffron.

Roasted Carrots with Thyme. Carrots with Cumin Recipe. Carrots Recipes - Page 4. Carrot Keftedes. Normally, keftedes are made with ground meat (they're basically meatballs). These vegetarian alternatives are packed with flavor. Pre-roasting the carrots brings out their natural sweetness which is balanced by the salty, sour feta and Kefalotyri. Mint and parsley add freshness, with a hint of cinnamon for spice. Serve with Pomegranate Skordalia and Carrot Tabbouleh. These keftedes are just as delicous served cold. The Secret Menu: Jiayang Fan of The New Yorker spices up your potato - SupChina.

Welcome to the first of two pilot episodes of The Secret Menu, our new cooking show, where we show you real Chinese recipes that real Chinese people eat! In each episode, a guest will demonstrate how he or she prefers to make a personal favorite home-style Chinese dish. We’re delighted to have Jiayang Fan 樊嘉扬 as the chef in charge of our maiden show — you might know her as a New Yorker staff writer who has recently produced excellent reads about Xi Jinping and Chinatown ghost scams. Fan is also a Chongqing native and an occasional food critic who knows her way around spices. Chongqing is a megalopolis with provincial status that was carved out of the province of Sichuan in 1997.

Cook until tender throughout, but not falling apart, about 15 minutes - it really depends on the potatoes. In the meantime, prepare your toppings. Melt 6 tablespoons of the butter gently in a small saucepan over medium-low heat. Crush the coriander seeds in a mortar and pestle. A basic recipe for winter greens. Dear Lynne, This is an odd season to do it, but I am a frozen-to-fresh vegetable convert. I like things in butter sauce, but don't want the fat, and want to eat greens. Sautéed Greens with Olives Recipe. Vegetable Lasagna. Buttered Cabbage Recipe. Slow Cooked Brussels Sprouts Recipe : Dave Lieberman.

Be sure to check it out as his instructions manage to be both thorough and hilarious, which is no easy feat. Use this sauce anywhere you need firepower, literally. Summer Tomato Pudding. This was Lynne's first taste of the south of France -- the place she’d fantasized about since sighting her first Van Gogh in high school. How to Cook with Canned Tomatoes : Canned Tomato Recipes. Eggplant "Meatballs" in Tomato Sauce. Best Baked Potatoes. To produce baked potatoes with an evenly fluffy interior, we figured out their ideal doneness temperature: 205 degrees. Baking them in a hot (450-degree) oven prevents a leathery “pellicle” from forming underneath the peel. To season the skin, we coat the potatoes in salty water before baking; we crisp the skin by painting it with vegetable oil once the potatoes are cooked through and then baking the potatoes for an additional 10 minutes.

Open up the potatoes immediately after removal from the oven in step 3 so steam can escape. Top them as desired. Ingredients. How To Roast Any Vegetable. I am a firm believer in the power of a roasted vegetable. Not only can virtually every vegetable be cooked in this way — no recipe required — but roasted vegetables are universally pleasurable to eat. Have a picky eater in the house? Broccoli With Anchovies and Garlic Recipe - NYT Cooking. Squashed Potatoes Recipe on Food52. Cooking is more fun with friends. The Best Garlic Roasted Brussels Sprouts. Better Tomorrow Vegan Chili. Try This Mouthwatering Parmesan Potato Recipe. Whole Cauliflower Braised in Tomato Sauce. Slow Cooker Cauliflower Chicken Chowder. Weight Watchers — Zucchini Fries Recipe.