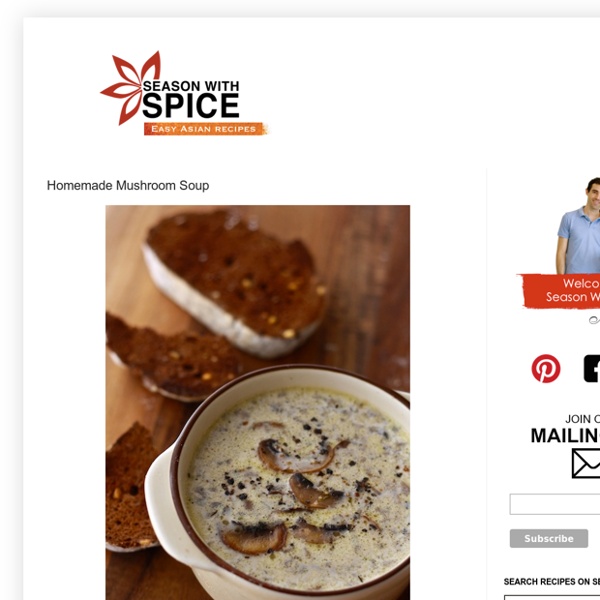 The essence of the Christmas season should be about spending time, not money. Spending time away from work, with family and friends and a glass of eggnog. Spending time in the kitchen, slowing down, learning new dishes and relearning others, cooking from scratch for your loved ones to enjoy. Spending time smiling, laughing, remembering the joy this season brings each year. And the season of spending time warming up with warm drinks and warm soups. One of my favorite warming dishes – Homemade Mushroom Soup. Fresh, firm and plump mushrooms – swiss brown, white button, shiitake, portobello or a mix of them all – soaked in milk and cream, spiced with aromatic thyme and bay leaf, and a dash of freshly ground pepper and a pinch of Christmas nutmeg. You’ll never look at another can of mushroom soup again. Homemade Mushroom Soup by Season with Spice Serves 2 as appetizer Method: 1. Looking for more delicious soups? Related:  Soup and Stew

Homemade Chicken and Dumplings In a bowl, combine the flour, baking powder and salt. Cut the butter into the dry ingredients with a fork or pastry blender. Stir in the milk, mixing with a fork until the dough forms a ball. Heavily flour a work surface. You’ll need a rolling pin and something to cut the dumplings with. I like to use a pizza cutter. Roll the dough out thin with a heavily floured rolling pin. Use the floured spatula to put them on a heavily floured plate. To cook them, bring the broth to a boil. For more pictures and instructions, see the related link above! I Breathe...I'm Hungry...: Cream Cheese Pancakes After months of overindulging, January typically arrives with a slew of guilt and a waistband that is screaming for mercy. Since many people turn to a low carb lifestyle to get their sugar cravings under control and lose those extra pounds, I thought I’d devote this week to some of my favorite low carb recipes – starting with these delicious low carb cream cheese pancakes. Whenever I resort to low carb diets like keto or Atkins to lose weight, the toughest meal for me is always breakfast. There are only so many eggs you can eat before you are looking for something different. I usually whip up a batch of these low carb cream cheese pancakes in my trusty magic bullet, and it takes less than a minute to make the batter. Cream Cheese Pancakes (Low Carb and Gluten Free) These delicious low carb pancakes taste like skinny fried cheesecakes! Author: Mellissa Sevigny Recipe type: Low Carb Breakfast Recipe Cuisine: American Serves: 4 pancakes Ingredients Instructions Notes Nutrition Information

Baked Rigatoni - Ring Finger Tan LineRing Finger Tan Line Cheese and I go way back. I like its creamy texture. It likes my thighs. It’s a rather symbiotic relationship we’ve got going. But lately, we’ve been on the outs. It’s not that cheese has wronged me or anything. But the strike I’ve been on has come to an end with this recipe for baked rigatoni. *Okay, it’s not really three pounds. In prepping for my pasta fest, I decided I wanted to try something new for this photo shoot. There has got to be some plywood by a dumpster somewhere, I think. Had I known beforehand that plywood is generally nailed to other pieces of plywood, I may not have thought this idea was so great. There has got to be a plywood dumpster nearby, I muse. So I get to a dumpster, and there’s all this wood, and I’m thinking fuck yeah, I’m a genius. I get to the next dumpster and it’s pretty short, which is great, because – duh – so am I. Fuck, this has got to be illegal, I think in panic. So I smile and wave, because waving makes people like you. Baked Rigatoni, by me.

Vegan & Gluten-Free Recipes by Allyson Kramer Yes, it’s another orange soup. There may be more this month, so fair warning! But this one is a pretty awesome recipe, if I do say so myself. This soup has a pleasant depth and is slightly sweet from the addition of those pretty orange potatoes and roasted cauliflower. The sweetness is delicately enhanced with a light sprinkle of garam masala. Sweet Potato Cauliflower Soup yield: 6 to 8 servings 1 large head cauliflower (the one I used was at least 7″ in diameterolive oil for drizzlingFew dashes garam masala (optional)3 medium to large sized peeled sweet potatoes, cut into 1″ pieces1 sweet onion, diced2 cloves garlic7 cups filtered water First, preheat your oven to 400 °F and cut up your cauliflower into bite sized pieces. In large stockpot, bring sweet potato, onion, garlic and water to a boil. Let soup cool and then blend one part soup in blender until very smooth. Share with friends!

Crash Hot Potatoes Man, do I love Australia. First, my oldest daughter was conceived there on our honeymoon…and while we’re on the subject, have I ever shared with you that we almost named her “Sydney” as a nod to her point of origin? In the end, I chickened out, though—I thought that might be a little corny, and truth be told, I think she was actually conceived in Brisbane. Anyway, I just love Australia. They’re so simple, it’s terrifying. For now, though, let’s take a chill pill and make Crash Hot Potatoes! The Cast of Characters: New Potatoes (or other small, round potato), Olive Oil, Kosher Salt, Black Pepper, and whatever herb you like. Begin by bringing a pot of salted water to a boil. Add in as many potatoes as you wish to make, and cook them until they’re fork-tender. Oh! Next, generously drizzle olive oil on a sheet pan. This will mean the difference between the potatoes sticking and not sticking, so don’t be shy here. When the potatoes are tender, place them on the cookie sheet… Or something. Mmmm.

Classy, Crusty Artisan Bread | Emily Loves Food I love making bread. If I’ve got a day where I’ve really got to get some uni work done – I’ll make bread. Because it adds structure to my day, without taking much effort. I make the bread, and while it proofs, get some work done. Take it out, punch down the yeast. And as it rises again, more uni work. While the oven heats up, more uni work. While it bakes, I dot my ‘i’s and cross my ‘t’s. Then, as a reward for a solid few hours work, I get freshly baked bread. Making bread is actually super easy – and in fact, the crusty, classy stuff like this is the easiest. Here, I added oregano, thyme, a smidge of tomato paste and a couple of tablespoons of the oil from a jar of sundried tomatoes. Classy, Crusty Artisan Bread - Makes one medium-sized round loaf Prep time: 3 hours, give or take Cook time: 45mins Sprinkle the yeast over the warm water in a bowl, and leave for five minuets to go foamy and soft. In a small bowl, mix together the herbs and butter/oil. Occupy yourself while you wait. See?