Growing Turnips - How to Grow Turnips from Allotment Vegetable Growing Advice and Guides. How to Grow Salsify. Days to germination: 21 days Days to harvest: 120 to 150 days Light requirements: Light shade in summer Water requirements: Frequent and consistent watering Soil: Any soil, as long as it’s loose and stone-free Container: Not suitable for pots Introduction Looking for something a little different for your garden? 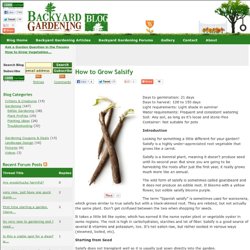 Salsify is a highly under-appreciated root vegetable that grows like a carrot. Salsify is a biennial plant, meaning it doesn’t produce seed until its second year. But since you are going to be harvesting the roots after just the first year, it really grows much more like an annual. The wild form of salsify is sometimes called goatsbeard and it does not produce an edible root. The term “Spanish salsify” is sometimes used for scorzonera, which grows similar to true salsify but with a black-skinned root. It takes a little bit like oyster, which has earned it the name oyster plant or vegetable oyster in some regions. Starting from Seed Growing Instructions Containers. Carrot. Description Flowers of a carrot plant The carrot is a variable biennial plant, usually growing up to 1 m tall and flowering from June to August. 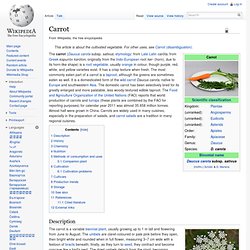 The umbels are claret-coloured or pale pink before they open, then bright white and rounded when in full flower, measuring 3–7 cm wide with a festoon of bracts beneath; finally, as they turn to seed, they contract and become concave like a bird's nest. The dried umbels detach from the plant, becoming tumbleweeds.[1] Similar in appearance to the deadly poison hemlock,[2][3] D. carota is distinguished by a mix of bi-pinnate and tri-pinnate leaves, fine hairs on its stems and leaves, a root that smells like carrots, and occasionally a single dark red flower in its center.

History The wild ancestors of the carrot are likely to have come from Iran and Afghanistan, which remain the centre of diversity of Daucus carota, the wild carrot. In early use, carrots were grown for their aromatic leaves and seeds, not their roots. Chemistry β-Carotene structure. Beet. Beetroots at a grocery store Beetroot on a plate The beetroot, also known in North America as the table beet, garden beet, red or golden beet, or informally simply as the beet, is any of the cultivated varieties of beet (Beta vulgaris) grown for their edible taproots, especially B. vulgaris L. subsp. conditiva.[1] They are among the most commonly encountered varieties in North America, Central America, and Europe. 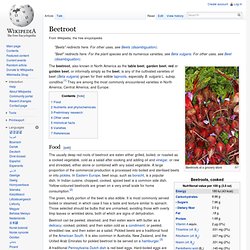 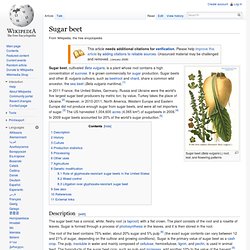 It is grown commercially for sugar production. Radish. The descriptive Greek name of the genus Raphanus (ῥάφανος) means "quickly appearing" and refers to the rapid germination of these plants. 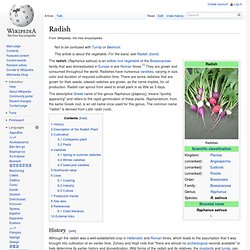 Raphanistrum, from the same Greek root, is an old name once used for this genus. The common name "radish" is derived from Latin radix (root). History[edit] Although the radish was a well-established crop in Hellenistic and Roman times, which leads to the assumption that it was brought into cultivation at an earlier time, Zohary and Hopf note that "there are almost no archeological records available" to help determine its earlier history and domestication.

Wild forms of the radish and its relatives, the mustards and turnip, can be found over western Asia and Europe, suggesting that their domestication took place somewhere in that area. Description of the Radish Plant[edit] Daikon. Daikon , mooli , or white radish ( Raphanus sativus var. longipinnatus , also known by other names ) is a mild-flavoured, very large, white East Asian radish with a wide variety of culinary uses. 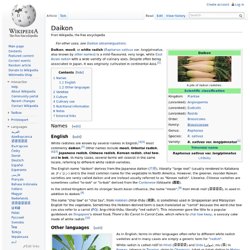 Despite often being associated in Japan, it was originally cultivated in continental Asia. [ 2 ] Names [ edit ] English [ edit ] Parsnip. Pastinaca sativa fruits and seeds The parsnip is native to Eurasia. 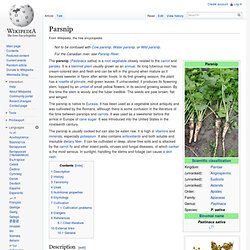 It has been used as a vegetable since antiquity and was cultivated by the Romans, although there is some confusion in the literature of the time between parsnips and carrots. It was used as a sweetener before the arrival in Europe of cane sugar. It was introduced into the United States in the nineteenth century. The parsnip is usually cooked but can also be eaten raw. Description[edit] History[edit] Like carrots, parsnips are native to Eurasia and have been eaten there since ancient times. In 1859, a new cultivar called "Student" was developed by James Buckman at the Royal Agricultural College in England.

Taxonomy[edit] Pastinaca fleischmannii Hladnik, ex D.Dietr.Pastinaca opaca Bernh. ex Hornem.Pastinaca pratensis (Pers.) In Eurasia, some authorities distinguish between cultivated and wild versions of parsnip by using subspecies sylvestris for the latter, or even elevating it to species status as Pastinaca sylvestris.