School meals are a good thing – more should have them. In 2005, Jamie Oliver and his consciousness-altering Jamie's School Dinners series on C4 persuaded the Labour government to purge Turkey Twizzlers and all junk food from the menus at England's schools. 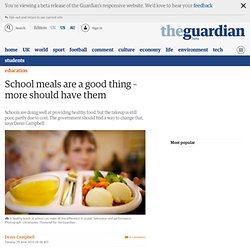 All that has been replaced with healthy, nutritious lunches. Enlightened intervention improves pupils' health and ability to learn. In 2010, a new Lib-Con coalition government, avowedly committed to fairness, has scrapped its predecessor's plans to extend free school meals to 500,000 children from low-income families. Doctors, teaching unions and child poverty campaigners urge a rethink. "Healthier school meals improve classroom behaviour, helping to improve academic performance and attainment," they point out to Michael Gove. An Ofsted report last Friday gave schools deserved plaudits for their efforts to make the food served on their premises tasty and popular.

So good news – but only up to a point. . • Denis Campbell is the Guardian's health correspondent. Jo 10% drop. The health of children who eat school dinners may be better than pupils who bring in packed lunches, according to a study published online by the British Medical Journal today. 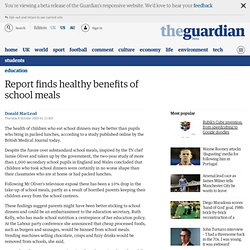 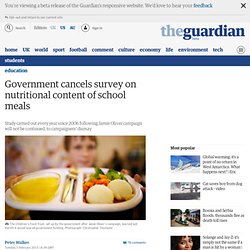 The Children's Food Trust, which has carried out the study since 2006, told the Guardian it had been informed by the Department for Education that it would not be commissioned to do the survey this year, and nor would another organisation. Ministers will decide whether to resurrect the survey in the future following a wider report into school food led by Henry Dimbleby and John Vincent, founders of the Leon chain of restaurants.

Last month the trust, set up by the government in the wake of Oliver's 2005 TV series about the poor standard of food served in many schools, learned it would lose all its government funding, news that prompted alarm among childhood nutrition campaigners. Oliver says standards down. 25 November 2011Last updated at 14:28 By Angela Harrison Education correspondent, BBC News Jamie Oliver: "The standards are there to keep everyone on their game" The TV chef Jamie Oliver has accused the Education Secretary Michael Gove of eroding healthy school food standards. 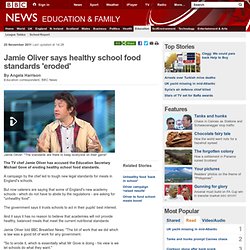 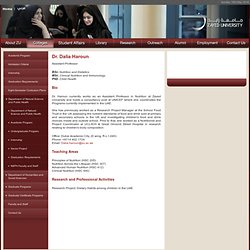 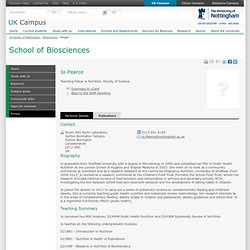 She went on to work as a community nutritionist at SureStart and as a research assistant at the Centre for Pregnancy Nutrition, University of Sheffield. Jo joined the division in 2012 to carry out a series of systematic reviews on complementary feeding and childhood obesity. Battle of Ideas 2012. 5.5bil pl year. A cross-sectional survey of chi... [J Epidemiol Community Health. 2010] 11 - cross sectional study. Tuesday January 12 2010 Few packed lunches are healthy enough “Only one in 100 pupils' packed lunches meets basic dietary standards,” reported The Times. 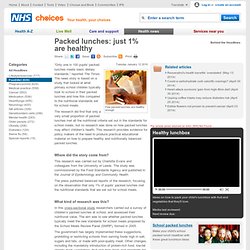 The Negative Effects Of Eating Unhealthy Food For Kids. The most common problem among kids today is poor nutrition when it comes to food intake. 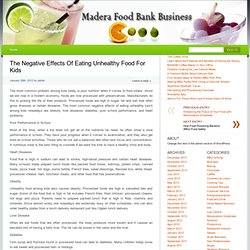 Since we are now in a modern economy, foods are now processed with preservatives. Manufacturers do this to prolong the life of their products. Processed foods are high in sugar, fat and salt that often gives illnesses or certain diseases. The most common negative effects of eating unhealthy lunch among kids nowadays are obesity, liver diseases, diabetes, poor school performance, and heart problems. 10 - healthu ch better learners. Processed foods that are high in fat, sugar, and salt have become a mainstay of lunches in schools across America and the results are in — experts say these unhealthy school lunches are a contributing factor to the childhood obesity epidemic. 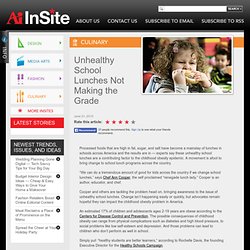 A movement is afoot to bring change to school lunch programs across the country. “We can do a tremendous amount of good for kids across the country if we change school lunches,” says Chef Ann Cooper, the self proclaimed “renegade lunch lady.” Cooper is an author, educator, and chef. Cooper and others are tackling the problem head on, bringing awareness to the issue of unhealthy school lunches. Change isn’t happening easily or quickly, but advocates remain hopeful they can impact the childhood obesity problem in America. 8 - some see pl better. 9 - obes stats sl. Thanks to food campaigners across the country, we have standards in school food to ensure that children don’t get offered junk and can eat well at school. 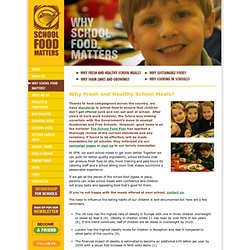 After years of hard work however, the future was looking uncertain with the Government's move to exempt Academies and Free Schools. However, good news is on the horizon! The School Food Plan has sparked a thorough review of the current standards and any revisions, if found to be effective, will be made mandatory for all schools. Stay informed via our campaign pages or sign up to our termly newsletter.

At SFM, we want school meals to get even better. 6 - advocate pl policies. The School Food Trust has produced some information and advice on healthier packed lunches. Recent research carried out by the School Food Trust suggests that the nutritional quality of school dinners are benefiting from the introduction of new food-based standards for school food. These improvements are not reflected in the nutritional quality of packed lunches. This highlights the potential for inconsistency between food served in school and food brought from home.

The School Food Trust advocates the introduction of Packed Lunch Policies to support healthier eating. Where implemented, after proper consultation with pupils, parents and staff, they offer clear guidance and an opportunity to improve food consumed by all pupils. 7 - JO - cancer research. 3 October 2011Last updated at 00:07 Kate Mendoza: "Eating healthily can reduce people's chances of getting diseases like cancer" Parents are failing to put enough fruit and veg into their children's packed lunches, health experts have warned. The School Food Trust, which examined 3,500 packed lunches in England in 2009, says about 40% of lunchboxes do not contain any fruit or vegetables, compared with 10% of school dinners. It said parents should consider switching to school meals. Meanwhile, the World Cancer Research Fund has set up a website to give parents advice on healthier lunchboxes.

LACA_ParentPay_Research_2012. 5 - 99 plunh - journal .. He was not too wide of the mark – although children at his school did do markedly better than the national average, where only one in every 100 packed lunches meets government nutritional standards. Chocolate abounded. The first lunchbox we uncovered at Coleraine Park Primary School in Tottenham, north London, contained a chocolate spread sandwich on white bread and a packet of crisps. Another included a cheese pastry, a packet of Hula Hoops and a chocolate biscuit. However, we did then unearth one containing an orange, orange juice, water and a chicken sandwich. Actual research lit review. 4 - CFT summary & info page. Jamie 1. Jamie Oliver's healthy school dinners continue to produce a marked improvement in national curriculum test results five years after the chef first launched his campaign, according to research. A study by academics shows children eating the healthier lunches introduced by the TV chef do far better in tests.

Prise rise sl 2. 3 sl inc, The effects of breakfast on behavior and academic performance in children and adolescents. 32% of pupils skip breakfast before school, study finds. Getting their oats helps kids perform better. Two studies of children's breakfast eating habits appear to show that kids who eat oatmeal at the start of the day perform better in memory tests - good news for Quaker Oats which sponsored the studies.