10 Blogs Entrepreneurs Need to Be Reading 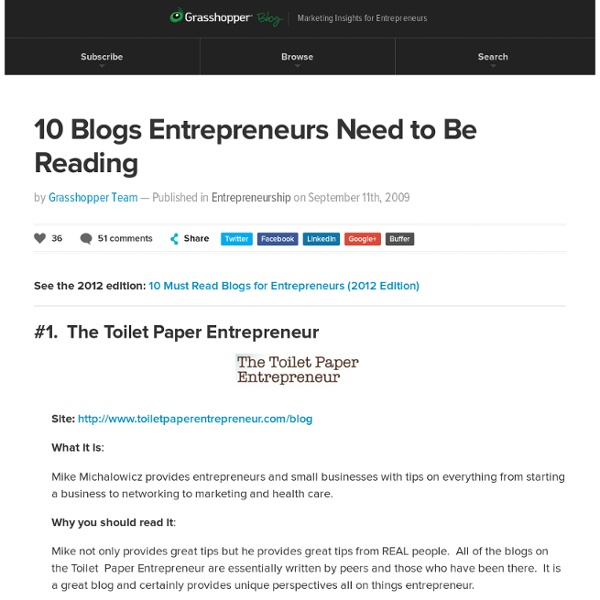 See the 2012 edition: 10 Must Read Blogs for Entrepreneurs (2012 Edition) #1. The Toilet Paper Entrepreneur Site: What it is: Mike Michalowicz provides entrepreneurs and small businesses with tips on everything from starting a business to networking to marketing and health care. Why you should read it: Mike not only provides great tips but he provides great tips from REAL people. #2. Site: What it is: Written by a panel of small business owners, the site offers tips and advice on everything business related. Small business trends really covers EVERYTHING! #3. Site: Run by two brothers, Matthew and Adam Toren, Young Entrepreneur is exactly what it sounds like; a site dedicated to young entrepreneurs. Between blog posts, forums, polls and interviews with other small business owners, the site offers fantastic content. #4. Site: Web Worker Daily is dedicated to providing tips and advice for those using the web for work…well, obviously. Why you should read it: #5. Site: #6. Site: #7. Site: What it is: #8.

Starting a Business: Advice from the Trenches If you’re like thousands of other designers, programmers and other creative professionals out there, at one point in time you’ve considered starting your own business. Unlike most, you’ve gone against common sense and decided to open shop for yourself. And not just freelance full-time, mind you, but file for the company name, get some stationery, and wade through the legal mumbo-jumbo. Grow Bottle: Grow your own herbs using repurposed wine bottles. Grow your own herbs using repurposed wine bottles. Overview: Give the gift of home-grown herbs with the earth-friendly and aesthetically pleasing Grow Bottle.

92 Ways to Get (and Maximize) Press Coverage I love Ben Affleck's first scene in the movie "Boiler Room." I always felt that the quote above perfectly relates to companies and press coverage. The ones who don’t get coverage will quickly dismiss it as useless and a waste of time and money to pursue, while the ones who regularly get coverage just smile and hope that you keep thinking that way... Over the last 12 years, I have been featured in hundreds of major newspapers, magazines, websites and blogs (everything ranging from the NY Times, USA Today and CNN to TechCrunch, Entrepreneur and so on), and I can tell you first-hand that it has helped me and my companies in an enormous way. It's brought me:

10 Units of Measure You Don’t Know I became interested units of measure when, quite a while ago, I read a book by Professor Alexander Thom, the man who discovered the megalithic yard. This bright Scottish Professor suspected that the megalithic stone circles strewn across the British Isles and Northern France were probably arranged in some measured way. By surveying many of them he eventually deduced the unit of measure to be 2.72 feet, which he promptly named the megalithic yard. Sadly, it had been forgotten, discarded in the landfill of history when people ceased to care much where the sun rose on the solstices. Become an Autodidact: 10 Ways to Become a Self Taught Master Some of the greatest people in history have educated themselves to a large degree using a process known as autodidacticism. This is something that’s more easily undertaken these days with the great wealth of online tools available to anyone. Whether you’ve gone to college or not, you can learn just about anything these days on your own. Want to learn about the classics? Carpentry and home maintenance?

29 Ways to Collect Email Addresses for Your Business Looking for ways to grow your list of newsletter subscribers? There are a ton of ways to get people to sign up for your weekly or monthly email marketing campaigns. I’ve put together a list for you to read, so you have heaps of options for growing your list. Include a link to your newsletter sign up form in the main navigation bar of your website and/or blog. (Or better yet, include a sign up form in the main navigation bar).Create a “sign up” call to action on your Facebook business page.Create enticing visuals encouraging people to sign up for your list, and post them on social media channels (especially Facebook, Twitter, Instagram, and LinkedIn).Attend or exhibit at a trade show or networking event and bring a newsletter email sign up clipboard or book. If you’re tech savvy, bring an iPad or mobile device with you.

10 Best Sexual Drinking Games Some of the best sexual drinking games can be done either in an intimate setting with only you and your girlfriend or you can make it a party and have multiple people. The ten most commonly played sexual drinking games are: Nine cans of beer or the floor. In this game you will need about nine cans of beer per person, (NOTE: not everyone will finish this game) a shot glass and a time keeper.

Startups: What’s in a name? Having a catchy name for your business or product is more important than ever. A memorable name will help people find your company’s website, Twitter feed or Facebook page or find related reviews or apps. Even a great product or company will lose some of its shine if customers and potential customers can’t locate it on the Internet. In the era of social media a name or logo can be the primary way a company is identified in every nook and cranny of the Internet. 25 Hilarious Halloween Costumes Nov 2, 2010 Like every Halloween before it, this year saw no shortage of hilarious and creative costumes. Some were meticulously crafted, others were delightfully simple. A quick search on Reddit for ‘costume’ revealed thousands of submissions all clamoring for the coveted Internet seal of approval. Below are 25 hilarious entries that caught the Sifter’s eye, enjoy! 1.

Einstein’s Secret to Amazing Problem Solving (and 10 Specific Ways You Can Use It) Einstein is quoted as having said that if he had one hour to save the world he would spend fifty-five minutes defining the problem and only five minutes finding the solution. This quote does illustrate an important point: before jumping right into solving a problem, we should step back and invest time and effort to improve our understanding of it. Here are 10 strategies you can use to see problems from many different perspectives and master what is the most important step in problem solving: clearly defining the problem in the first place!

46 Ways To Start A Business With No Money Most people who want to start their own business don’t have a ton of money laying around and it’s probably one the most common questions I get emailed about: How can I get started without a lot of cash? Well I’ve put together a list below of the best ideas I’ve heard and personally used. I hope you find it useful!