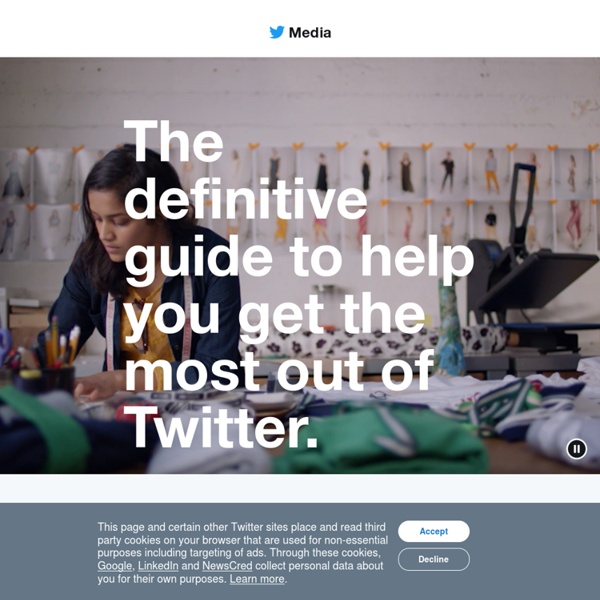 Twitter study casts doubts on ministers' post-riots plan Analysis of more than 2.5m Twitter messages relating to the riots in England has cast doubt on the rationale behind government proposals to ban people from social networks or shut down their websites in times of civil unrest. A preliminary study of a database of riot-related tweets, compiled by the Guardian, appears to show Twitter was mainly used to react to riots and looting. Timing trends drawn from the data question the assumption that Twitter played a widespread role in inciting the violence in advance, an accusation also levelled at the rival social networks Facebook and BlackBerry Messenger. The unique database contains tweets about the riots sent throughout the disorder, which began in Tottenham, north London, on 6 August. It also reveals how extensively Twitter was used to co-ordinate a movement by citizens to clean the streets after the disorder.

Details about #litdinner x Here you'll find news about events, my upcoming novel, blog postings, and other things that seem relevant (and sometimes irrelevant, but interesting nonetheless) to my writing and my life. Please scroll down to see what's up. "A satisfying story....I won't give away the twist at the end but will say every time I think of the way Goldie made her own party, I smile." -- Anne Clinard Barnhill, Historical Novel Society "The Secret of the Nightingale Palace is beautifully conceived and written. It would make an ideal book club selection because you are going to want someone to discuss it with afterward.

Facebook changes its lobbying status in Washington By Jon Swartz, USA TODAY SAN FRANCISCO — As lawmakers and regulators ponder sweeping changes to online privacy law, Facebook is working to shape its image on Capitol Hill and avert measures potentially damaging to its information-sharing business. The world's largest social-networking site is increasing its Washington office, spending more on lobbying and meeting with lawmakers, congressional staff and privacy experts who question whether the company is adequately protecting the personal information of its 500 million users. Founder Mark Zuckerberg is also on a charm offensive to show he's on the right side of the debate. Facebook recently hired its seventh Washington employee and plans to move into new, 8,000-square-foot office space in late April.

How I use Followerwonk, and Why I Love It Best of 2013: No 11 – How I use Followerwonk, and Why I Love It During the holiday weeks we will be showing you the 15 best read posts of 2013. Except for on Christmas and New Years day, each day you can read the best articles again, going from number 15 back to number 1. Government backs down on plan to shut Twitter and Facebook in crises The government has climbed down on plans to ban suspected rioters from using social networking websites in times of civil unrest. The home secretary, Theresa May, told social networks at a meeting on Thursday that the government had no intention of "restricting internet services". Research in Motion (RIM, the maker of BlackBerry), Facebook and Twitter were summoned to the meeting with May after David Cameron signalled a clampdown on the sites following the recent riots in England.

GoodReads Profile RUNNING AWAY TO HOME has been chosen as Best Nonfiction Book of 2011 by the American Society of Journalists and Authors. Jennifer Wilson has worked as a Big Band disc jockey, a high-school English teacher, detasseler of corn, and a reporter and editor for newspapers and magazines. She's written for Esquire, National Geographic Traveler, No Depression, Traditional Home, Gourmet and many other national magazines and newspapers. RUNNING AWAY TO HOME (St.

Yahoo hits back at email snooping claims Yahoo has hit back at claims it is 'snooping' through the emails of users of its webmail service. A change to the terms and conditions of Yahoo's free webmail service highlighted the fact the tech giant will "scan and analyse all incoming and outgoing communications content sent and received" from accounts such as Mail and Messenger including instant messages and SMS messages Furthermore, Yahoo is making users of the webmail service responsible for alerting non-Yahoo users about the potential snooping. Twitter Itself Will Soon Decide the Value of Your Tweets Twitter is about to start attaching value ratings to users' tweets. The value judgements will be assigned to the public metadata of tweeters' posts, and used by Twitter's streaming API to help developers more selectively curate massive amounts of status updates. Designations of "none," "low" and "medium" will most likely debut on Feb. 20, according to a post by developer advocate Arne Roomann-Kurrik on the Twitter developers' blog. A "high" value option will be rolled out sometime after the initial batch.

Should journalists confirm information before passing it along on Twitter? On Thursday many journalists unknowingly perpetuated a hoax that CNN had suspended Piers Morgan due to the British tabloid phone-hacking scandal, sparking a conversation about whether journalists need to slow down before tweeting. Others have chronicled the spread of the rumor, including TheNextWeb and Ross Neumann with a Storify. But as people were issuing mea culpas to their followers, Reuters’ Felix Salmon wrote a provocative post on his Tumblr blog, suggesting that Twitter is more like a newsroom than a newspaper. Rumors happen there [on Twitter], and then they get shot down — no harm no foul. … In the newsroom, we say things like “did you hear that Piers Morgan just got suspended?” One and Only Lily - Collection For the Twitter Fiction Festival, author Zoe Ruderman ( @zoeruderman ) took on the persona of @OneAndOnlyLily , a usually-faithful girlfriend who has a less-than-faithful night. As she tries to decide whether or not to confess her transgressions, Lily's perspective splits and we see her story in two parallel storylines, adding @TwoAndOnlyLily . Phone ringing! Somehow turned itself on in middle of night.

Personal Privacy Tips Back to top Web browsers have evolved into highly customizable software platforms capable of controlling and protecting much of the information that flows between you and the parties you interact with online. Modern browsers have an impressive array of privacy enhancing capabilities and options. The Science of Twitter Webinar Twitter marketing success shouldn’t be about luck. There’s a science to understanding how users behave, what kinds of content they want to engage with and what produces real, dollars-and-cents results. This webinar will also include the latest real world, actionable, in-the-trenches data you need to do your job of marketing on Twitter more successfully.

Facebook Tells Salman Rushdie He Has to Go By His Given Name, Ahmed Rushdie - Alexis Madrigal - Technology This is the sort of thing that makes you wonder what real names policy is all about. Today on Twitter, Salman Rushdie detailed his adventures with Facebook's name police. "Amazing. 2 days ago FB deactivated my page saying they didn't believe I was me. I had to send a photo of my passport page. THEN... they said yes, I was me, but insisted I use the name Ahmed which appears before Salman on my passport and which I have never used," Rushdie wrote.