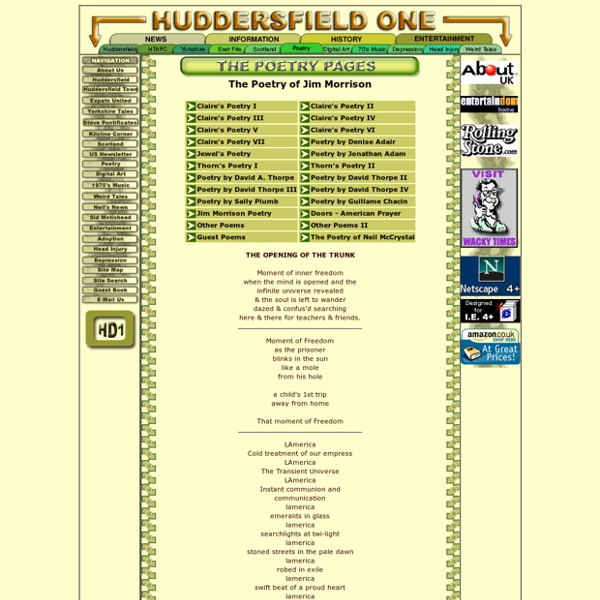 The Poetry of Jim Morrison Moment of inner freedom when the mind is opened and the infinite universe revealed & the soul is left to wander dazed & confus'd searching here & there for teachers & friends. Moment of Freedom as the prisoner blinks in the sun like a mole from his hole a child's 1st trip away from home That moment of Freedom LAmerica Cold treatment of our empress LAmerica The Transient Universe LAmerica Instant communion and communication lamerica emeralds in glass lamerica searchlights at twi-light lamerica stoned streets in the pale dawn lamerica robed in exile lamerica swift beat of a proud heart lamerica eyes like twenty lamerica swift dream lamerica frozen heart lamerica soldiers doom lamerica clouds & struggles lamerica Nighthawk doomed from the start lamerica "That's how I met her, lamerica lonely and frozen lamerica & sullen, yes lamerica right from the start" Then stop. he enters stage: Blood boots. I'm Me! What are you doing here? Look. I am a guide to the Labyrinth I can

Jim Morrison James Douglas "Jim" Morrison (December 8, 1943 – July 3, 1971) was an American singer, songwriter and poet best remembered as the lead singer of The Doors.[1] Morrison developed an alcohol dependency. He died at the age of 27 in Paris, allegedly of a heroin overdose. No autopsy was performed, and the exact cause of Morrison's death is still disputed.[8] Jim Morrison's grave is located at Père Lachaise cemetery in eastern Paris.[9] Early years[edit] His ancestors were Scottish, Irish, and English.[11][12] In 1947, Morrison, then four years old, allegedly witnessed a car accident in the desert, in which a family of Native Americans were injured and possibly killed. Morrison was arrested in Tallahassee after pulling a prank while drunk at a football game In January 1964, Morrison moved to Los Angeles to attend the University of California, Los Angeles (UCLA). The Doors[edit] Promotional photo of the Doors in late 1966 Performing with the Doors, 1967 Promotional photo of Jim Morrison in 1967