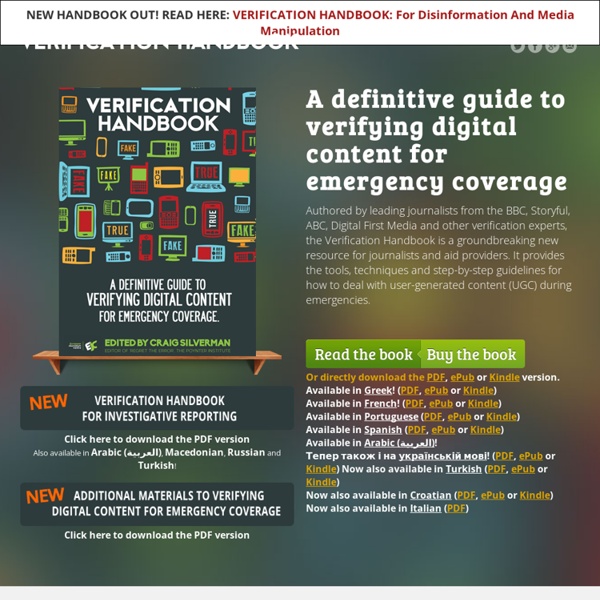 Evaluate: Assessing Your Research Process and Findings – The Information Literacy User’s Guide: An Open, Online Textbook Introduction In 2010, a textbook being used in fourth grade classrooms in Virginia became big news for all the wrong reasons. The book, Our Virginia by Joy Masoff, had caught the attention of a parent who was helping her child do her homework, according to an article in The Washington Post. Democracy without Journalism?: Confronting the Misinformation Society - Oxford Scholarship Abstract Democracy without Journalism? is about the ongoing journalism crisis and the policies we need to confront it. It exposes the historical roots, market failures, and policy inaction that led to the loss of local journalism and the proliferation of misinformation through both social media and mainstream news.

Blue Feed, Red Feed What is this? Recent posts from sources where the majority of shared articles aligned “very liberal” (blue, on the left) and “very conservative” (red, on the right) in a large Facebook study. In 2015, the journal Science published a research paper by Facebook scientists (Bakshy, Eytan; Messing, Solomon; Adamic, Lada, 2015, “Replication Data for: Exposure to Ideologically Diverse News and Opinion on Facebook”, Harvard Dataverse, V2) which looked at how a subset of the social network’s users reacted to the news appearing in their feeds. For six months, Facebook tracked and analyzed the content shared by 10.1 million of its users (who were anonymized). These users had identified their political views in their own profiles on Facebook. Analyzing these users’ political labels, the researchers categorized each as very liberal, liberal, neutral, conservative or very conservative.

Truth, truthiness, triangulation: A news literacy toolkit for a “post-truth” world We were guaranteed a free press, We were not guaranteed a neutral or a true press. We can celebrate the journalistic freedom to publish without interference from the state. We can also celebrate our freedom to share multiple stories through multiple lenses. But it has always been up to the reader or viewer to make the reliability and credibility decisions. It is up to the reader or viewer to negotiate truth. Network Propaganda: Manipulation, Disinformation, and Radicalization in American Politics - Oxford Scholarship Abstract This book examines the shape, composition, and practices of the United States political media landscape. It explores the roots of the current epistemic crisis in political communication with a focus on the remarkable 2016 U.S. president election culminating in the victory of Donald Trump and the first year of his presidency. The authors present a detailed map of the American political media landscape based on the analysis of millions of stories and social media posts, revealing a highly polarized and asymmetric media ecosystem. Detailed case studies track the emergence and propagation of disin ... More

10 Ways to Spot a Fake News Article - EasyBib Blog For many of us, 2016 is going down as a year to forget. Election upsets, Zika, the Syrian crisis, and unfortunately tons of fake news about all of the above and everything in between. Denzel Washington was recently quoted as saying, “If you don’t read the newspaper, you’re uninformed. If you do read the newspaper, you’re misinformed.” Bias News - Evaluating News - LibGuides at University of South Carolina Upstate Hyperpartisan - Websites, Facebook Pages, and Social Media Accounts These are websites, social media pages, or accounts designed to spread information presented through a highly partisan, biased lens. Hyperpartisan websites or Facebook pages may share a combination of fake news and partisan content (misleading stories, partisan memes and videos, et cetera) that is not considered fake news, but could still contain misleading or out-of-context information designed to confirm a particular ideological view. Hyperpartisan pages and accounts are often fake news purveyors that generate shares and clicks in order to either push a particular political view or profit from user engagement on social media platforms. Misleading Information Misleading or out-of-context information does not on its own constitute fake news.

Why We're Polarized by Ezra Klein “The American political system—which includes everyone from voters to journalists to the president—is full of rational actors making rational decisions given the incentives they face,” writes political analyst Ezra Klein. “We are a collection of functional parts whose efforts combine into a dysfunctional whole.” In this book, Klein reveals the structural and psychological forces behind America’s descent into division and dysfunction. Neither a polemic nor a lament, Klein offers a clear framework for understanding everything from Trump’s rise to the Democratic Party’s leftward shift to the politicization of everyday culture. America is polarized, first and foremost, by identity. Google, democracy and the truth about internet search Here’s what you don’t want to do late on a Sunday night. You do not want to type seven letters into Google. That’s all I did. I typed: “a-r-e”. And then “j-e-w-s”.

Fact-Check It: Digital Tools to Verify Everything Online - Poynter Over the past few years, misinformation has exploded online. Hoaxes go viral on social media after most breaking news events, manipulated videos dupe internet users into sharing them and fake news sites publish fabricated stories and cash in on the traffic. But as the amount of fakery on the internet has expanded, so too have tools that help users verify information. Fact-checking reporter Daniel Funke and digital tools reporter Ren LaForme will share some of the best tools, tips and methods for verifying information online.

News Use Across Social Media Platforms 2016 A majority of U.S. adults – 62% – get news on social media, and 18% do so often, according to a new survey by Pew Research Center, conducted in association with the John S. and James L. Knight Foundation. In 2012, based on a slightly different question, 49% of U.S. adults reported seeing news on social media. But which social media sites have the largest portion of users getting news there? How many get news on multiple social media sites? And to what degree are these news consumers seeking online news out versus happening upon it while doing other things?

NewseumED Are your students savvy searchers? Can they spot the difference between a straight news article and an opinion piece? Do they recognize bias in their sources … or in themselves? You are in one of Fact Finder: Your Foolproof Guide to Media Literacy’s 11 flexible, multimedia lesson plans to tackle these challenges. a post that is mostly a really long list of links to other people’s stuff on media literacy and fake news… The “fake news” problem is all over the news and all of the sudden everybody wants to be “information literate” and “media literate.” This is a good thing in the scheme of things because maintaining a functional democracy with a populous that is information or media illiterate is … really, really hard. Making my thinking visible even though I can’t draw very well … YET! [Did you see what I just did there?]