Moving at the Speed of Creativity 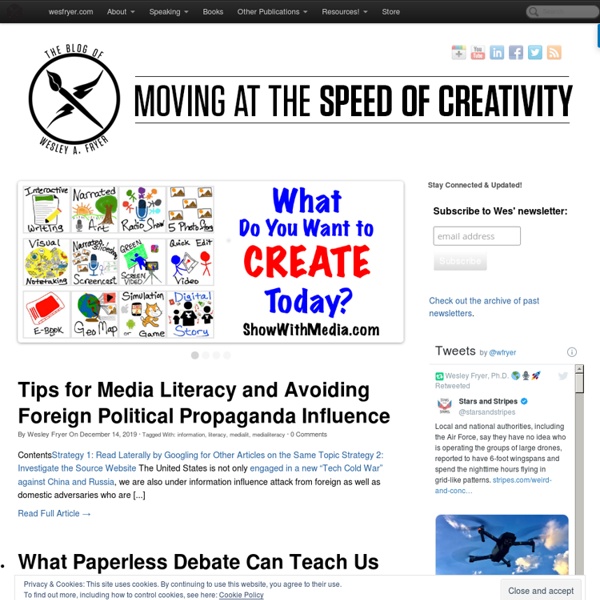 Teaching and Learning News provide by Expert Educational Consultants In this episode, Alan speaks with Ewan McIntosh, Founder of NoTosh, out of Edinburgh, Scotland. The two begin with a discussion about Ewan’s work with design thinking for developing a new learning ecology within an International Baccalaureate school in Barcelona, Spain. This leads in to a conversation about the emotional process teachers go through in relinquishing some of their established control within the classroom. Finally, they discuss the role of school leaders and the key shifts they must make in order to jump into the design thinking process within their schools.

Nabokov on Inspiration and the Six Short Stories Everyone Should Read by Maria Popova “A prefatory glow, not unlike some benign variety of the aura before an epileptic attack, is something the artist learns to perceive very early in life.” “Show up, show up, show up,” Isabel Allende advised, “and after a while the muse shows up, too.” “Inspiration is for amateurs,” Chuck Close famously proclaimed, “the rest of us just show up and get to work.” 2¢ Worth Listen A few weeks ago I worked and attended North Carolina's ISTE affiliate conference. I opened the NCTIES conference with a breakfast keynote address and Marc Prensky closed it with a luncheon keynote the next day. Sadly, I missed the second day of the conference. I would first offer some constructive criticism to NCTIES , and to all such ed-tech conferences across the nation and around the world.

Catalyzing Creativity: 7 Playful Activity Books for Grown-Ups by Maria Popova Greenlighting mess-making, 101 ways to astonish yourself, and how to flowchart your way to happiness. The intersection of childhood and adulthood is a frequent area of curiosity around here, from beloved children’s books with timeless philosophy for adults to quirky coloring books for the eternal kid. Top 50 Education Technology Blogs Education technology has many supporters in its movement to alter traditional teaching methods. This list of the top 50 education technology blogs includes writers, technicians and social media experts…but they all are teachers. The “movers” are teachers who facilitate learning among other teachers and in the classroom, the “shakers” teach new philosophies and innovations, and the folks “on the ground” offer news, tools and methods of using those tools in the classroom. This list is divided into those three categories, and each link within those categories is listed alphabetically.

Watch Free Documentary Online - Nightly A gripping, deeply informative account of the plunder, hypocrisy, and mass violence of plutocracy and empire; insightful, historically grounded and highly relevant to the events of today. This documentary is about the foreign policy of the United States. It demonstrates the importance of the political economy, the Mafia principle, propaganda, ideology, violence and force. It documents and explains how the policy is based on the interest of major corporations and a tiny elite to increase profits and the United States governments own interests in maintaining and expanding it's imperialistic influence. Inside the United States this has been made possible with a propaganda of fear for the horrible enemies like the Soviet Union, Communists and so on and a love for "free markets", "democracy", "freedom" and so on. Externally (and increasingly internally) this has caused massive poverty and suffering, genocide, war, coups, crushed unions and popular movements and environmental destruction.