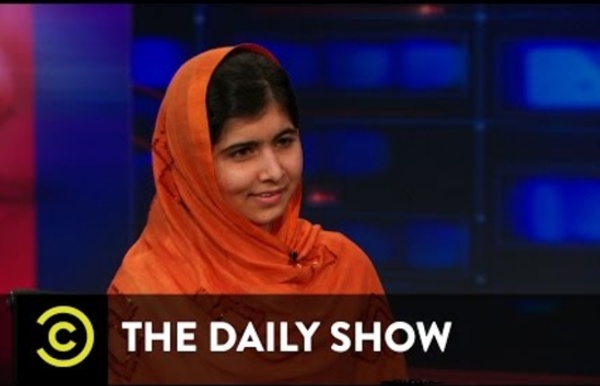 The Syrian Refugee Crisis Explained Perfectly With a Simple Animation & Video In September 2015, the body of a three-year-old Syrian boy was found floating on the shores of the Mediterranean Sea. Photographs of the boy were quick to get circulated world over, and the world responded with a massive outcry over the Syrian civil war and refugee crisis. This was the first time the Syrian crisis was globally recognised as a burning issue, and one that needs to be addressed with utmost urgency.

104. MALALA YOUSAFZAI: I have the right Malala Yousafzai (1997-) is a 15-year-old Pakistani girl who was shot in the head on the way home from school by the Taliban. Her only crime was criticising the Taliban’s strict rules against female education and standing up for her right to go to school. Inspired by her activist father, Malala was involved in social justice from a young age. She first gained prominence at age 11, when she wrote a blog for the BBC for 10 weeks (under a pseudonym) detailing her life under Taliban rule. The blog was extremely popular and her real identity was later revealed when her father nominated her for an International Peace Prize. From there she started appearing on television, speaking against the Taliban’s ruling that banned girls from attending school.

Drama Sites and Ideas for EFL, ESL Classrooms Drama in the ESL Classroom is a resource site for EFL, ESL teachers who are interested in using drama in their teaching. The site contains explanations on drama techniques and links to other sites. Classroom Lesson Plans a great sites full of links to very useful lesson plans. Drama.Ed.Net is another site that an EFL teacher would like to bookmark. Some more activities on Eslflow can be bookmarked or downloaded to be used in the class.

The text of Malala Yousafzai's speech at the United Nations On July 12 2013, the first ever Youth Takeover of the UN took place, organised by the President of the UN General Assembly, UN Special Envoy for Global Education Gordon Brown and A World at School. A World at School and partners brought together hundreds of young education advocates from around the world, including Malala Yousafzai, who made her first public speech since being attacked by the Taliban in Pakistan. We worked with more than 100 organisations to bring together the world's leading young education champions - including Malala - and organise the unprecedented Youth Takeover of the UN. At the same time there were parellel Youth Takeovers in many other countries around the world.

Migrant crisis: Finland's case against immigration Image copyright AFP/Getty Images As EU member states consider whether to accept an increase in the number of asylum seekers they take in, particularly from Syria, they each face a vibrant internal discussion on how to respond to the challenges of immigration. The BBC news website looks at the debate in Finland, where the difference between opinions is clearly defined, even within the government.

Classroom Games for Intermediate & Advanced English Learning, Teaching a, an, & Articles, Singular/Plural Practice A an the spin using this ESL fun Game. Adjectives vs. Adverbs with -ly 10 Female Revolutionaries That You Probably Didn't Learn About In History class By Kathleen Harris / whizzpast.com/ Sep 5, 2014 We all know male revolutionaries like Che Guevara, but history often tends to gloss over the contributions of female revolutionaries that have sacrificed their time, efforts, and lives to work towards burgeoning systems and ideologies. Despite misconceptions, there are tons of women that have participated in revolutions throughout history, with many of them playing crucial roles. They may come from different points on the political spectrum, with some armed with weapons and some armed with nothing but a pen, but all fought hard for something that they believed in.

She Was Called The World's Ugliest Woman, Now She's An Inspiration by Kase Wickman 3/17/2015 Imagine you’re 17 years old. You’re surfing the web, procrastinating. » Celebrate Grammar Day with this fun quiz! To share this quiz with your readers, embed this in your blog post by pasting the following HTML snippet into your web editor: Please attribute this content to grammarly.com/grammar-check. Get it free now Are you sick of making embarrassing grammar mistakes? The world's most advanced automated proofreader is now FREE for Chrome users! Ten ways talking in English baffles Swedes A Viking - sometimes pronounced 'Wiking', in Sweden. Photo: Shutterstock While Swedes were recently ranked the world's best non-native English speakers, there are a few common - and often charming - mistakes The Local's team has spotted while chatting to them in their second language. 1. Sheep shoes We absolutely adore how ‘ch’ often becomes ‘sh’ in Swedish, but it sometimes baffles us.

Everyone Believes These 16 "Facts" But Unfortunately They're Complete Lies 1. Chameleons change their color to blend into their surroundings. The color changing skill that chameleons have is actually to express their mood and mating behavior. Instead of a camouflage technique, it's a way to communicate. 2. If you constantly crack your knuckles, you'll end up with arthritis.