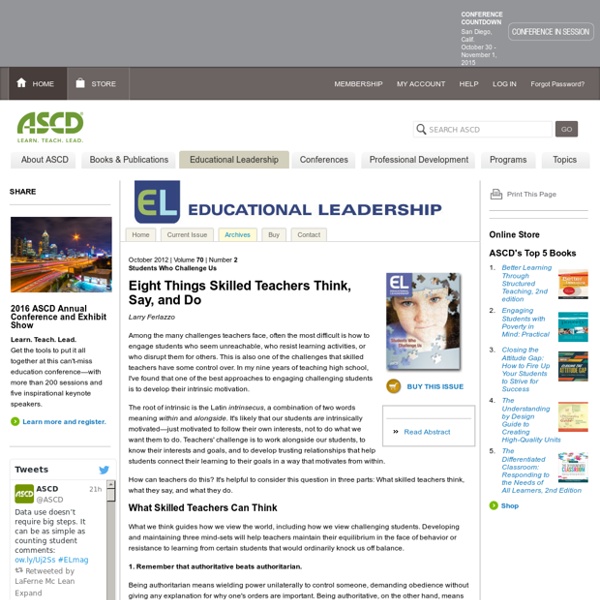 Among the many challenges teachers face, often the most difficult is how to engage students who seem unreachable, who resist learning activities, or who disrupt them for others. This is also one of the challenges that skilled teachers have some control over. In my nine years of teaching high school, I've found that one of the best approaches to engaging challenging students is to develop their intrinsic motivation. The root of intrinsic is the Latin intrinsecus, a combination of two words meaning within and alongside. It's likely that our students are intrinsically motivated—just motivated to follow their own interests, not to do what we want them to do. Teachers' challenge is to work alongside our students, to know their interests and goals, and to develop trusting relationships that help students connect their learning to their goals in a way that motivates from within. How can teachers do this? What Skilled Teachers Can Think 1. 2. Which mind-set we hold makes a tremendous difference.

Impact On Education > The Importance of Highly Skilled Teachers March 27, 2010 Published by: Rutgers University Author: Megan Schramm-Possinger Highly skilled teachers are one of the single most important influences on student success (Kane, Rockoff, & Staiger, 2007). Class size and other salient variables do not impact students’ learning trajectories as much as the quality of their teachers (Kane, Rockoff, & Staiger, 2007). How Can Teachers Prepare Kids for a Connected World? Educators are always striving to find ways to make curriculum relevant in students’ everyday lives. More and more teachers are using social media around lessons, allowing students to use their cell phones to do research and participate in class, and developing their curriculum around projects to ground learning around an activity. These strategies are all part of a larger goal to help students connect to social and cultural spaces. And it’s part of what defines “participatory learning,” coined by University of Southern California Annenberg Professor Henry Jenkins, who published his first article on the topic “Confronting the Challenges of Participatory Culture,” in 2006.

21 Simple Ideas To Improve Student Motivation 21 Simple Ideas To Improve Student Motivation by TeachThought Staff The best lessons, books, and materials in the world won’t get students excited about learning and willing to work hard if they’re not motivated. New Pedagogies For the Digital Age 15 Habits For Learning In The 21st Century 10.89K Views 0 Likes Defining 21st century skills is an editorial matter, but part of a larger, important conversation. How has learning changed in the 21st century?

17 Real-World Ways iPads Are Being Used In Schools Last year, iPads in education took the world by storm, finding their ways into initiatives at both the K-12 and university levels. Edudemic’s friends over at Education Dive have talked to some of the people responsible for those roll-outs and watched schools decided how to use tablets, whether they were Apple’s or not . In 2013, iPads are still going strong. New pilot programs are winning over former doubters—and in some cases existing programs are expanding. So how will iPads be used as their classroom roles evolve in 2013?

Seven Ways to Use QR Codes for Your Business Are you familiar with QR codes? You’ve probably already seen them around—those quirky squares with the intricate black and white design inside. The design is actually a matrix code that stores a lot of a large amount of information in a small, square space.

strategies-helping-students-motivate-themselves-larry-ferlazzo?crlt_pid=camp Editor's Note: This piece was adapted from Building a Community of Self-Motivated Learners: Strategies to Help Students Thrive in School and Beyond by Larry Ferlazzo, available March 21, 2015 from Routledge. My previous post reviewed research on extrinsic and intrinsic motivation, and described the four qualities that have been identified as critical to helping students motivate themselves: autonomy, competence, relatedness, and relevance. In this post, I'll discuss practical classroom strategies to reinforce each of these four qualities. Autonomy Providing students with freedom of choice is one strategy for promoting learner autonomy.

Teaching the Next Generation The other day I was issued a challenge….by a nine year old child. This child, one who has proven to be wise beyond their years, issued their challenge by voicing just one simple word….why? Why…..? It has power, you can’t deny it. But, before we get too far into the question, I think I need to back up a bit. Day 28 - Class Dojo Class Dojo will not apply to every participant in the 30 Day Challenge as it is specifically designed for the classroom teacher, but I encourage you to be open-minded about the possible applications for this classroom management tool, which was introduced in beta early this fall, caught the attention of educators from the UK to the US, and garnered top prize in NBC News' Education Nation Innovation Challenge. Later in this post, I will share an invitation for you to start your own class(es) with Class Dojo. On the most rudimentary level, Class Dojo is a real-time, digital star chart for student behavior.

Students Set Goals by Del Siegle Click for video about student goals. goals An ancient Chinese proverb notes that no wind is favorable if one does not know to which port one is sailing. Goals provide a standard against which students can gauge their progress, and setting goals can have a substantial impact on student self-efficacy and achievement. Setting and measuring goals is probably the most effective classroom modification teachers can make to increase student confidence. The Most Inspiring Motivational Posters for Teachers The Most Inspiring Motivational Posters for Teachers The images above were all lifted (with permission!) from a wonderful Flickr stream created by Krissy Venosdale. I find them deeply inspirational, and I thought I’d share them in case someone else out there is looking for a bit of motivation.

10 Little-Known Twitter Tools For Connected Educators There’s an array of Twitter tools that make the rounds on the ol’ edtech circle. We chat about Hootsuite , Paper.li , and Bit.ly quite a bit. But there are a lot of little-known Twitter tools that don’t see the light of day on sites like Edudemic. So I thought this would be a good time to start fixing that. We’re creating a series of helpful posts designed to turn you on to a few tools that you may not know about – but will be anxious to try once you learn about them.

7 best word processing apps for tablets Will Microsoft Word come to the iPad? After initial evidence it now appears unlikely, which means that the burgeoning market for free text editor apps on the iPad and elsewhere can continue. There are so many available for both iOS and Android that we can only present a few here, but all have their pros and cons. Format handling is critical, but it's more about integration with a device's OS than simple readability; can you take a Word doc from an email, make changes and send it on back? And though these apps are all about typing, arguably more important than text-entry is navigation, with ease of correcting mistakes crucial – especially if you're tapping away on glass rather than a Bluetooth keyboard. Lastly, where – and how – is that document saved?

Using QR Codes to Differentiate Instruction An expectation of the Common Core Learning Standards is that teachers differentiate their instruction to meet the needs of all children. This includes special education and general education students, as well as English-Language Learners. One of my favorite technology tools, the QR code, can be used to meet the needs of a variety of students in one classroom. Teachers can create QR codes for differentiated instruction activities. A QR (quick response) code is similar in principle to a barcode -- a matrix image that can be scanned using a mobile device like a smartphone or a tablet with Internet access.