RSA Animate - Drive: The surprising truth about what motivates us 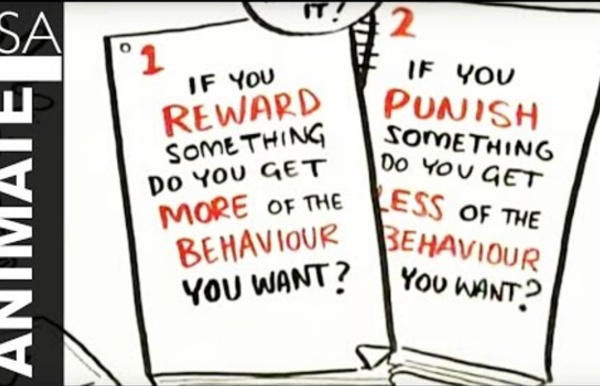 Teaching English to Second Language Learners by fi2 (Miscellaneous) - ProZ.com translation articles Teaching english to second-language learners Many translators and other well-versed in English people around the world engage in a form of language-related labour: teaching English to second language learners. This activity can be both rewarding and pleasurable and off-course produce income. Happiness At Work #68 ~ the power of the positive and learning from success This week we New Zealand folk are in celebratory mood. Eleanor Catton has won the Man Booker 2013 Prize with her second novel, The Luminaries. And we have still more reason to be proud as the New Zealand government officially recognises the two largest islands of our country with both their European and their Maori names: New Zealand forgot to name its main islands Maori names get equal status as country corrects long-standing failure to make North and South Island names officialEight hundred years after the Maori first arrived in Aotearoa (New Zealand), and 370 years after Europeans spied its shores, the South Pacific nation’s major land masses will finally get official names.For generations, the two main islands have been called the North Island and the South Island.

The Internet of Things Is Changing How We Manage Customer Relationships Steven Moore Just as it’s hard to remember what life was like before the iPhone, it can be hard to remember business before there was CRM software — back when you still had to explain that it stood for “customer relationship management.” Today, CRM pervades the way many companies track and measure how they interact with other organizations, across many departments: marketing, sales, customer service, support, and others. CRM made it possible to determine precisely who responded to a specific marketing campaign and then who became a paying customer, which customer called the most for support, and so on. It gave companies some overall measure of revenue compared with marketing spend — something described in this 2007 article in The New York Times. But now that Big Data and the Internet of Things have come along, we can go beyond the transaction to every little detail of the customer’s actual experience.

Do-ocracy - OSGeo A do-ocracy (also sometimes do-opoly, which is a more obvious pun on “duopoly”) is an organizational structure in which individuals choose roles and tasks for themselves and execute them. Responsibilities attach to people who do the work, rather than elected or selected officials. From: The OSGeo Way of Doing Things OSGeo has adopted a do-ocratic way of getting things done.

How Facebook’s newest teen engineer supported his family with apps until cashing in There’s nothing that highlights the fact that Silicon Valley is the new Wall Street, gold rush, colonial settlement — insert your American Dream rags-to-riches historical moniker here — quite like the story of 18-year-old Miami resident Michael Sayman. This week, Facebook hired Sayman as one of its youngest full-time engineers in history. He wouldn’t tell me his salary, but admitted his friends are already pressuring him to “buy a Tesla,” which he won’t do because he’d “rather save the money.” Before you go throw up at the idea of a teenager buying himself a Tesla off tech riches, there’s few people who deserve that luxury quite as much as this kid. I met Sayman four months ago, when the then 17-year-old developer caught Mark Zuckerberg’s eye.

Visual Literacy Activities with Online Resources Last week I talked about visual literacy in Visual Literacy Activities with Children's Picture Books. I suggested children's picture books make a natural place to start teaching kids about visual literacy. Here are some online resources I've found that also support visual literacy. Almost any website can be examined from the perspective of its visual communications. Encourage your kids to become aware of what's behind the type and placement of images, choice and size of font, subheadings, flow of one chunk of text to another, colours etc. This helps them not only to develop visual literacy skills they can use in their own projects, but also to become more media savvy as consumers. Enthusiastic People Accomplish MORE This is NOT rocket science, but the general reactions of so many make it seem like this should be a Big Surprise: In places where there is high morale, there is higher performance. This from Sirota Consulting and their research: They expand on the numbers and their conclusions in their blog post, which you can find here. We feel the same way, and do not think it is real rocket science to figure out how to establish a positive work culture.

O'Reilly Media - Tech Books, DRM-Free Ebooks, Videos The high points in this book from Jeff Patton are too numerous to mention. I found myself taking copious notes, and you could do the same, but it would probably make more sense to keep it near you and dip into it regularly until you have fully digested it. It is filled with good quotes e.g. 'There's always more to build than you have people, time, or money for. Always.'