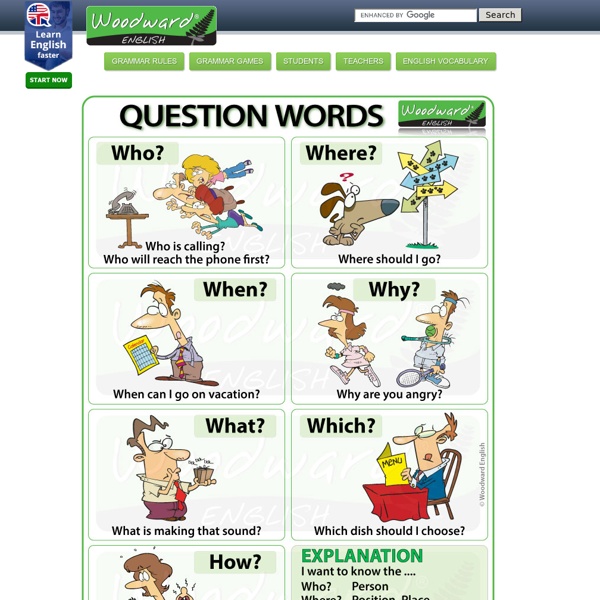 Shelve-it Full Screen About Shelver Mrs. Lodge is a library teacher in an elementary school. Idioms Idioms are expressions that would have different meanings if you took the words apart. The individual words in the idiom don’t usually help you make sense of it; you just have to know what it means. It would be helpful to do some online practice to gain a better understanding of idioms. An adjective is a word that describes something (a noun) or someone (a person). Adjectives sometimes appear after the verb To Be He is short. She is tall. Adjectives sometimes appear before a noun.

I'll tell you a story - Audio Written by Anonymous "The Story of the Three Bears" (sometimes known as "The Three Bears", "Goldilocks and the Three Bears" or, simply, "Goldilocks") is a fairy talefirst recorded in narrative form by British author and poet Robert Southey, and first published anonymously in a volume of his writings in 1837. The same year, British writer George Nicol published a version in rhyme based upon Southey's prose tale, with Southey approving the attempt to bring the story more exposure. Both versions tell of three bears and an old woman who trespasses upon their property. "The Story of the Three Bears" was in circulation before the publication of Southey's 1837 version. In 1831, for example, Eleanor Mure fashioned a handmade booklet about the three bears for her nephew's birthday, and, in 1813, Southey was telling the story to friends.

Question Words English Grammar Game - Juegos de Preguntas en inglés This English grammar game is to help you learn about when to use Question Words. Complete the sentence with the appropriate Question word (Who, when, why... etc.) If you would like to try another game about this grammatical structure, visit this one: Question Words 2. If you would like to read some Grammar Notes about Questions Words and when to use them, visit this page: Question Words. Digital storytelling with StoryRobe StoryRobe is another way for kids to create digital stories using photos or digital copies of their own artwork. Once they've selected the images they want to use and put them in the right order, they can record the text to go with the images. They can talk for a total of up to 3 minutes, and synchronize the images with what they are saying by tapping the screen as they talk to advance to the next picture.

What is the difference between United Kingdom, Great Britain and the British Isles? This is a common doubt some people have, especially if you are not from that part of the world. Here is a simple explanation: