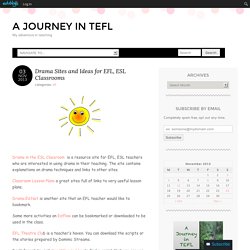 The site contains explanations on drama techniques and links to other sites. Classroom Lesson Plans a great sites full of links to very useful lesson plans. Drama.Ed.Net is another site that an EFL teacher would like to bookmark. Some more activities on Eslflow can be bookmarked or downloaded to be used in the class. EFL Theatre Club is a teacher’s haven. Don’t forget to visit Ken Wilson’s blog to find a script that you can use in the class. 11 svenskar som skolkade för mycket från engelska-lektionerna. The Daily Show: Extended Interview: Malala Yousafzai.

A, an, & Articles, Singular/Plural Practice A an the spin using this ESL fun Game. 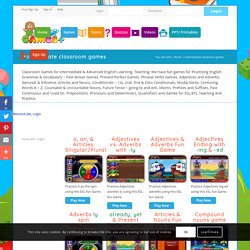 Adjectives vs. The 17 funniest expressions in Swedish (and how to use them) If You Love Bananas Stop What You’re Doing And Read These 10 Shocking Facts. She Was Called The World's Ugliest Woman, Now She's An Inspiration. By Kase Wickman 3/17/2015 Imagine you’re 17 years old. 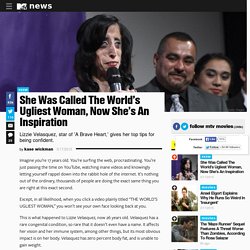 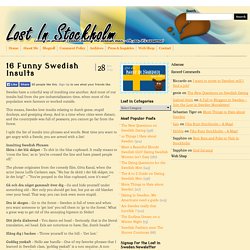 And most of our insults hail from the pre-industrialization time, when most of the population were farmers or worked outside. This means, Swedes love insults relating to dumb geese, stupid donkeys, and gossiping sheep. And in a time when cities were distant, and the countryside was full of peasants, you cannot go far from the forest. I split the list of insults into phrases and words. Ten common mistakes made by English learners - learn English,mistakes,english. Ten ways talking in English baffles Swedes. A Viking - sometimes pronounced 'Wiking', in Sweden. 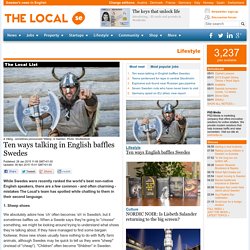 Photo: Shutterstock. Everyone Believes These 16 "Facts" But Unfortunately They're Complete Lies. 1. 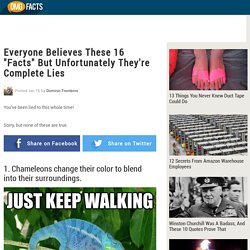 Chameleons change their color to blend into their surroundings. The color changing skill that chameleons have is actually to express their mood and mating behavior. Instead of a camouflage technique, it's a way to communicate. The five strangest habits of the Swedes. The Local's Oliver Gee has just left Sweden after four years, and reflects on what he found to be the five oddest habits of Swedish people. 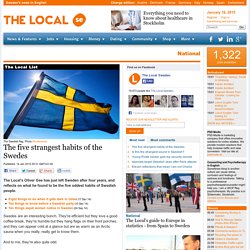 Getting The Least Motivated Students More Motivated By Working With The Most Motivated. I’ve been doing an “extra” project with my English Language Learner students the past few weeks that has been going very well, and I thought readers might find it useful/interesting. 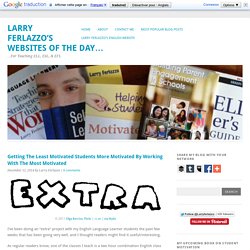 As regular readers know, one of the classes I teach is a two hour combination English class for Beginning and Intermediate ELLs (actually, one of those two periods is a Geography class for the Intermediates — I teach two separate classes simultaneously in practically all of my periods). 5 Games to Make Online Assessments Fun ExitTicket Student Response System. 5 Games to Make Online Assessments Fun Back when I was still using clickers for my Do Nows, students would race to be the first one to buzz in their answers. 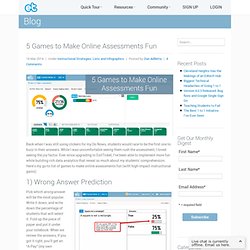 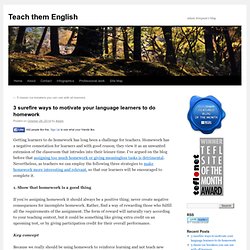 Homework has a negative connotation for learners and with good reason; they view it as an unwanted extension of the classroom that intrudes into their leisure time. I’ve argued on the blog before that assigning too much homework or giving meaningless tasks is detrimental. Nevertheless, as teachers we can employ the following three strategies to make homework more interesting and relevant, so that our learners will be encouraged to complete it. 1. Show that homework is a good thing.