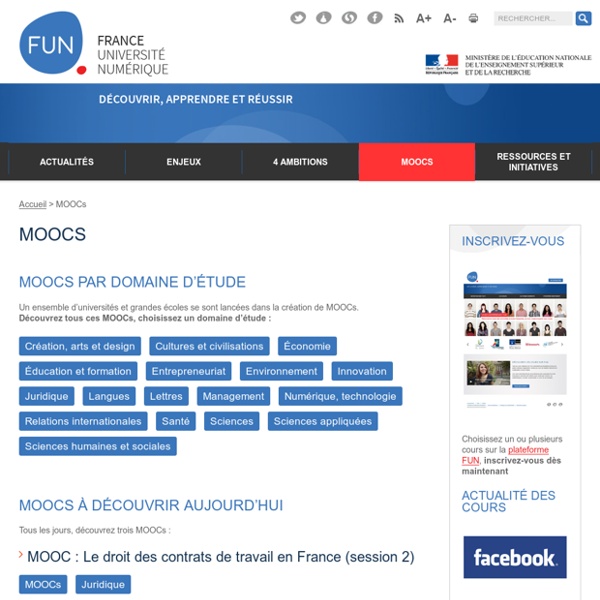 Robotutor No human teacher can keep up with thousands of students in massive open online courses. Smart software can now stand in, offering personalised guidance TENS of thousands of students across the world will log in to online classrooms this week. A large portion of them will be learning to write code in computer science courses. The scale and reach of massive open online courses (MOOCs) is growing year on year, and many argue they have the potential to vastly improve access to education. But size is also their biggest weakness: a human teacher can't guide, correct and give feedback to legions of students all working simultaneously. Top universities embrace MOOCs, but opinion is divided Elite universities, especially in America, are engaging enthusiastically in massive open online courses, or MOOCs. “They see opportunities for brand enhancement, pedagogic experimentation, recruitment and business model innovation,” says a review of MOOCs published by the UK government last week. But there are conflicting strands of opinion that are dividing the higher education community.

MOOC Strategies of the Traditional LMS Providers The other evening, a close friend of ours was discussing a bad experience taking a MOOC on Coursera. Neither the content nor the format of the class was the problem; rather, it was the experience of Coursera’s online platform that left this person wishing that it was delivered via a traditional LMS instead. Since late 2012, there has been conversation about the overlap between the LMS and MOOC platform markets. Founder of Lynda.com Talks About Future of Learning Online (Video) - Kara Swisher - Media To Lynda Weinman, it’s funny that the online learning site she and her husband founded in 1995 suddenly seems like an overnight success. “Yes, only two decades in the making,” she joked at a lunch I had with her last week. But there certainly has been a big buzz around Lynda.com — named after Weinman — after the Carpinteria, Calif., company raised $103 million a month ago in its first major funding. And, last week, as part of a major expansion globally using that money, it bought Austria-based video2brain to add to its online course offerings in a range of computer and other skills, in a number of European languages.

Coursera Raises $43m, LMS and MOOC Collision In Learning Platform Market -e-Literate Today Coursera announced their new round of fund raising, as reported at GigaOm: Just last year, online education startup Coursera raised $22 million in venture funding, but the Mountain View-based company is topping up its coffers once again.On Wednesday, the startup said it had raised $43 million in a Series B round of financing from an impressive and interesting group of investors, including education-centric investors GSV Capital and Learn Capital, well-known Russian investor Yuri Milner, the International Finance Corporation (which is the investment arm of the World Bank) and Laureate Education, a for-profit higher education provider formerly known as Sylvan Learning. Besides the size of the funding, what strikes me is that one of the emerging trends is that MOOCs are becoming more and more of a learning platform, adding many of the basic features of an LMS. When I pointed this out on Twitter, Burck Smith of StraighterLine got it right when he said “Sounds like an LMS”.

Should 'real' students do an online course on the side? Universities have started giving away their content free as "massive open online courses", with the satisfyingly ridiculous acronym mooc (I challenge you to say it three times with a straight face). Eleven top UK universities recently announced they were joining the Open University to launch FutureLearn, in a bid to catch up with the elite US institutions that have led the way in teaching huge numbers online. It all sounds great for people who, for one reason or another, can't go to a traditional university. But do moocs have anything to offer students already studying at a bricks-and-mortar institution? Calling an LMS a MOOC will only confuse the learner. Perhaps the Learning Management System (LMS) is not the best of terms to use when seeking to encourage learners to engage with e-learning courses; indeed when we first launched back in 1995 we described our tool as a Training Management System, a phrase still very much in use today. We realised some years ago that even this restricted the vision of what a fully developed training tool could achieve and rebranded our system as "Enable", giving it strong learner focus. In our view the term LMS is possibly guilty of having too much emphasis on management and not enough on learning. This is reflected in the fact that badly designed, or ‘tired’ LMSs are not overtly friendly or supportive to the learner as they embark upon the learning journey.

Massive open online course Poster, entitled "MOOC, every letter is negotiable", exploring the meaning of the words "Massive Open Online Course" A massive open online course (MOOC /muːk/) is an online course aimed at unlimited participation and open access via the web.[1] In addition to traditional course materials such as filmed lectures, readings, and problem sets, many MOOCs provide interactive user forums to support community interactions among students, professors, and teaching assistants (TAs). MOOCs are a recent and widely researched development in distance education which were first introduced in 2006 and emerged as a popular mode of learning in 2012.[2][3] Early MOOCs often emphasized open-access features, such as open licensing of content, structure and learning goals, to promote the reuse and remixing of resources.

Blackboard Pushes LMS Platforms for MOOC Use Distance Learning | News Blackboard Pushes LMS Platforms for MOOC Use By Dian Schaffhauser07/10/13 Corporate MOOC vs. Your Existing Learning Systems We’re putting together a series of blog posts around the topic of corporate MOOCs. We hope this helps you understand and frame how a corporate MOOC could add value to your business. If you’re interested in learning more, be sure to read our other blogs about corporate MOOCs. How are Companies Using MOOCs Today? Two weeks ago, I wrote my first blog post on corporate “massive open online courses,” or MOOCs. I described their origins in higher education and the value that corporations are beginning to achieve by using MOOCs to meet specific business objectives. Over the past few months, my colleagues and I have had dozens of conversations with business and learning leaders, seeking to understand how they are using MOOCs today, what applications they envision for their diverse audiences, and what ideas they have for using them in the future. We’ve learned a lot about MOOC applications in the corporate world, and we’ve identified some key themes: 1.