Most popular photography on StumbleUpon! 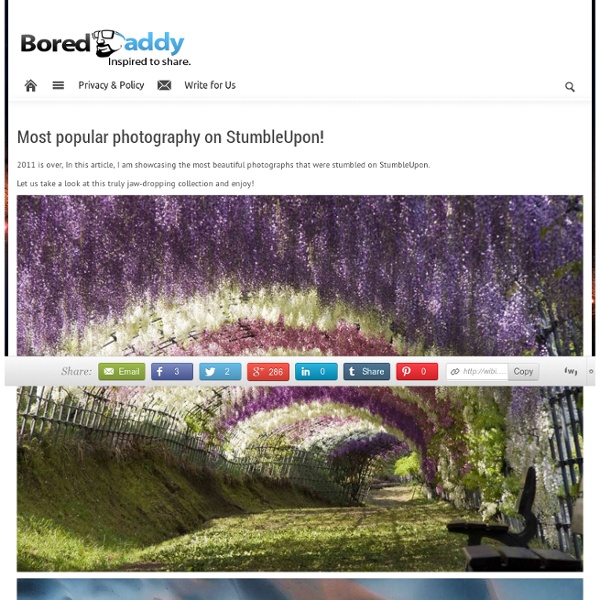 2011 is over, In this article, I am showcasing the most beautiful photographs that were stumbled on StumbleUpon. Let us take a look at this truly jaw-dropping collection and enjoy! Source: StumbleUpon *None of the images on this page are mine,they were found on StumbleUpon, meant to inspire.Any problems, just email.

Pictures of Moments Speak More than Thousand Words...... Picture can speak thousands of words. Random pictures of insignificant moments always been the most important and most valuable. Photographers and painters beautifully imprint huge number of events, objects and types. Some do it by accident on the momentary desire. Others do it in order to fix the time for the future. Amazing Nimbus: 25 Breathtaking Photographs of Beautiful Cloud Formation When you look at clouds, you find the most interesting of shapes. The layers of white and gray overlap each other beautifully and result in amazing cloud formations. Today we shall share with you all some such formations through their perfect photographs. Check them out below. Note: These are hi-res images, just click on images to see full size view Banksy - Guerilla art wrapped in mystery and controversy [35 pics] Banksy Truck Photo credit: Banksy Banksy, an anonymous England based graffiti artist, political activist, film director and painter, is probably the most popular, yet most mysterious, urban street artist in the world.

20 Very Interesting Photos From The '30s I love old photos because this is the only way I can really see our history. I like to check out the details such as clothing, decorations or food products because is not only interesting to see their habits but also how these evolved during decades or centuries. The images below were taken in the ’30s in various circumstances from an ice-skating scene and all the way to a legendary image with Stalin fooling around.

Mushrooms - Aliens in Hyperspace Citation: Terence. "Aliens in Hyperspace: An Experience with Mushrooms (ID 35516)". Erowid.org. Dec 17, 2007. erowid.org/exp/35516 50 Images from National Geographic`s 2010 Photo Contest Writen by Bogdan / Comments Off on 50 Images from National Geographic`s 2010 Photo Contest This is one of the most anticipated annual photo contests. The deadline for the submissions is on November 30th so if you have an interesting photo, submit it. Rare Rainbows in the Dark [24 PICS] Upper Yosemite Falls Moonbow. Rainbows in the dark have been delighting the few who are fortunate enough to witness the phenomenon since Aristotle’s time. Photo #1 by Teddy Llovet This spectacular picture from Easter Island shows the Milky Way, the Magellanic clouds, and a Moonbow. Photo #3 by Phil Plait Moonbow and starry night.

Judith Ann Braun's Fingers Are Magical With an art career spanning more than three decades, Judith Ann Braun has tested the limits of her artistic musculature. She began as a self-described “realistic figure painter,” and worked through the struggles common to anyone who endeavors upon an artistic pursuit, that of searching for one’s own voice in the chosen medium. Fast forward to the 21st century where the evolution of Braun’s work has brought us to the Fingerings series, a collection of charcoal dust landscapes and abstracts “painted” using not brushes but her fingertips. Braun has a specific interest in symmetry, as evidenced by the patterns she follows in a number of the Fingerings pieces as well as work in the Symmetrical Procedures collection. Her fingerprints are obvious up close in some of the paintings, though a step back and the grandeur of Braun’s imagination sprawls into a landscape of soft hills, overhanging trees, delicate florals, and a reflective waterway.

Public Art Concepts - Dan Sternof Beyer 2011 Download the PDF of these ideas : Public Art Concepts - Dan Sternof Beyer 2011 (2mb) [ New American Public Art ] 106 of the most beloved Street Art Photos More info. More info. More Banksy on Street Art Utopia. Gakuranman - illuminating Japan - StumbleUpon The ruins and haikyo aficionado in me couldn’t resist making a post about Tokyo Genso‘s fabulous art depicting post-apocalyptic Japan. The illustrations have a breathtaking otherworldly quality that perfectly capture the sort of scenes I regularly come across while exploring ruins, albeit of course, on a much grander and majestic scale. Some of the scenes really aren’t stretching the truth that much either.

Top 20 Earth Pictures found on Stumble Upon Everybody knows that Stumbleupon is an great source for beautiful photography, nature, pets, arts and much more. They have millions of users and they are probably the most wide used source for finding quality content. Today, we collected 20 popular photographs from Stumbleupon. Most of them have been seen for more than million times each.