Originality in photographs: follow-up to Harney v Sony decision. A few days ago The 1709 Blog posted its analysis of a very recent US decision, in which the US Court of Appeals for the First Circuit attempted to apply basic [this does not mean uncontroversial] principles such as the idea/expression dichotomy and originality to photographs. 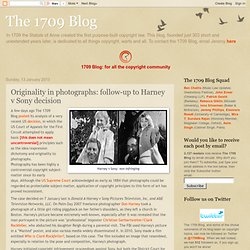 Photography has been highly a controversial copyright subject-matter since its early days. Although the US Supreme Court acknowledged as early as 1884 that photographs could be regarded as protectable subject-matter, application of copyright principles to this form of art has proved inconsistent. Harney v. Sony Pictures: Is a recreated photograph copyright infringement? « Mark Borghese. Feb132013. 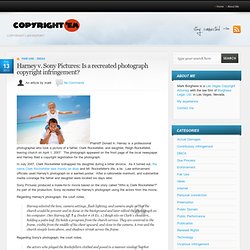 Originality in photographs according to US Court of Appeals. What is original (and is thus protectable) and what is not in a photograph? 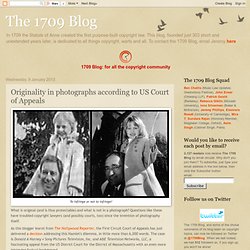 Questions like these have troubled copyright lawyers (and possibly courts, too) since the invention of photography itself. As this blogger learnt from The Hollywood Reporter, the First Circuit Court of Appeals has just delivered a decision addressing this Hamlet's dilemma, in little more than 6,000 words. The case is Donald A Harney v Sony Pictures Television, Inc, and A&E Television Networks, LLC, a fascinating appeal from the US District Court for the District of Massachusetts with an even more intriguing factual background. Background On a sunny spring day in 2007, freelancer Donald Harney snapped a photograph of a blonde girl in a pink coat riding piggyback on her father's shoulders while leaving a Boston church on Palm Sunday. In 2010, Sony produced a TV film based on Rockfeller's identity deception and entitled Who is Clark Rockfeller? Harney v. Sony Pictures: Is a recreated photograph copyright infringement? « Mark Borghese. Originality in photographs: follow-up to Harney v Sony decision.

Harney v. Sony Pictures Television, Inc. HARNEY v. SONY PICTURES TELEVISION, INC. First Circuit Strikes a Pose: Harney v Sony Pictures. Photographs Depicting Factual Content Not Enough For Copyright Infringement. A famous photograph depicting a man wanted by the FBI (for child abduction; passing as a member of the Rockefeller family, British royalty, a Wall Street advisor, and a rocket scientist) does not have enough copyrightable elements to meet the substantial similarity test for copyright infringement when compared with Sony’s mockup of the same photograph in a made-for-TV movie. 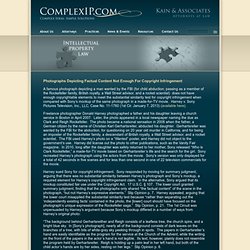 Harney v. Sony Pictures Television, Inc., LLC, Case No. 11-1760 (1st Cir. January 7, 2013) (available here). Freelance photographer Donald Harney photographed a father and his daughter leaving a church service in Boston in April 2007. Later, the photo appeared in a local newspaper naming the due as Clark and Reigh Rockefeller. Harney sued Sony for copyright infringement. “The background behind Gerhartsreither and Reigh consists of a leafless tree, the church spire, and a bright blue sky. “Not all copying…is copyright infringement.” The First Circuit Tackles Copyright in News Photography and Docudramas. Copyright in Photographs: Harney v. Sony Decided. Take a look at the First Circuit’s opinion in Harney v. 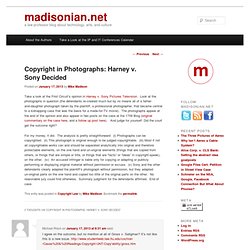 Sony Pictures Television. Look at the photographs in question (the defendants re-created much but by no means all of a father-and-daughter photograph taken by the plaintiff, a professional photographer, that became central to a kidnapping case that was the basis for a made-for-TV movie). The photographs appear at the end of the opinion and also appear in two posts on the case at the 1709 Blog (original commentary on the case here, and a follow up post here). And judge for yourself: Did the court get the outcome right? For my money, it did. The 1709 Blog: Originality in photographs: follow-up to Harney v Sony decision. To what extent is there copyright in a snapshot? The snapshot that generated the litigation was taken by Donald Harney, a freelance photographer. 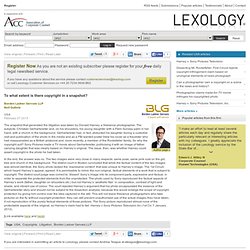 The subjects: Christian Gerhartsreiter and, on his shoulders, his young daughter with a Palm Sunday palm in her hand, with a church in the background. Gerhartsreiter had, in fact, abducted his daughter during a custodial visit and publication of the photo in the media and as a FBI wanted poster blew his cover as a fraudster who had masqueraded as a British aristocrat and, more recently, a member of the Rockefeller family. So why the copyright suit? Sony Pictures made a TV movie about Gerhartsreiter, publicising it with an image of father carrying daughter that was clearly based on Harney’s original. The issue, then, was whether Harney could assert copyright in the photo he had taken. In the end, the answer was no. [Link available here and here]. Use of candid photo in poster not infringing. The U.S. 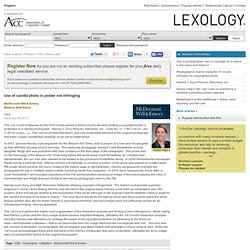 Court of Appeals for the First Circuit upheld a district court’s decision limiting a copyright holder’s protection in a candid photograph. Harney v. Sony Pictures Television, Inc., Case No. 11-1760 (1st Cir., Jan. 7, 2013) (Lipez, J.). The 1st Circuit held that where only one protectable element of the original photograph had been copied, substantial similarity could not be established. Harney v. Sony Pictures Television, Inc. USDC D. 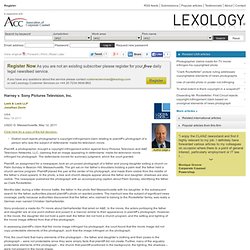 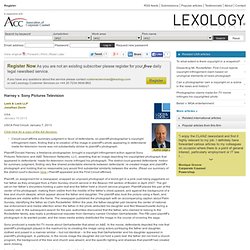