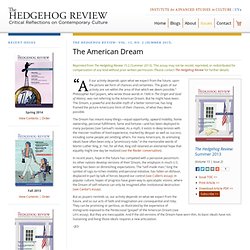 This essay may not be resold, reprinted, or redistributed for compensation of any kind without prior written permission. Please contact The Hedgehog Review for further details. “All our activity depends upon what we expect from the future, upon the picture we form of chances and certainties. The goals of our activity are set within the area of that which we deem possible.” What Makes a Work of Art Seem Dated? Why wonder is the most human of all emotions – Jesse Prinz. When I was growing up in New York City, a high point of my calendar was the annual arrival of the Ringling Brothers and Barnum & Bailey Circus — ‘the greatest show on earth’. 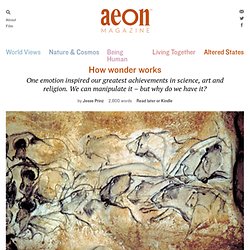 My parents endured the green-haired clowns, sequinned acrobats and festooned elephants as a kind of garish pageantry. For me, though, it was a spectacular interruption of humdrum reality – a world of wonder, in that trite but telling phrase. Wonder is sometimes said to be a childish emotion, one that we grow out of. But that is surely wrong. As adults, we might experience it when gaping at grand vistas. First, let’s be clear what we’re talking about. These bodily symptoms point to three dimensions that might in fact be essential components of wonder. English contains many words related to this multifarious emotion. Smith’s analysis appears in his History of Astronomy (1795). Why'd The Scientist Cross The Road? To Figure Out Why You're Laughing. Here's a joke: A man is sitting on the porch with his wife one night when, out of the blue he says, "I love you. 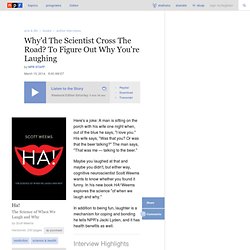 " His wife says, "Was that you? Or was that the beer talking? " The man says, "That was me — talking to the beer. " Maybe you laughed at that and maybe you didn't, but either way, cognitive neuroscientist Scott Weems wants to know whether you found it funny. In his new book HA! In addition to being fun, laughter is a mechanism for coping and bonding he tells NPR's Jacki Lyden, and it has health benefits as well. Interview Highlights So tell us a joke. Why We Love Beautiful Things. Plain or Fancy? A new exhibit at New York's Metropolitan Museum of Art. I tried, really I did. 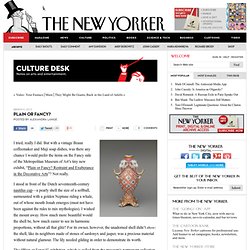 But with a vintage Braun coffeemaker and Muji soap dishes, was there any chance I would prefer the items on the Fancy side of the Metropolitan Museum of Art’s tiny new exhibit, “Plain or Fancy? Think You Know Ugly? Think Again. We’ve all had that moment while perusing a flea market or junk store when you stumble across an item and have to yelp, “Good lord, that is ugly!” 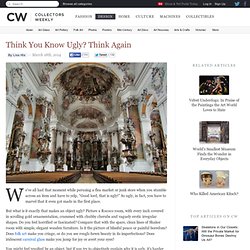 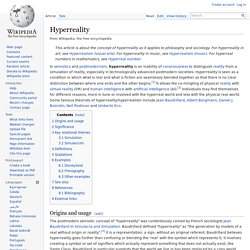 Hyperreality is seen as a condition in which what is real and what is fiction are seamlessly blended together so that there is no clear distinction between where one ends and the other begins.[1] It allows the co-mingling of physical reality with virtual reality (VR) and human intelligence with artificial intelligence (AI).[2] Individuals may find themselves for different reasons, more in tune or involved with the hyperreal world and less with the physical real world. The Fine Art of Resilience: Lessons from Stanley Meltzoff. Can entrepreneurs learn from artists? 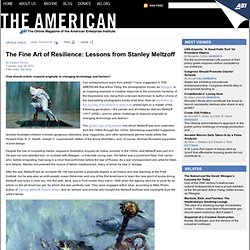 I have suggested in THE AMERICAN that Arthur Fellig, the photographer known as Weegee, is an inspiring example of creative response to the economic hardship of the Depression era, rising from unknown technician to author of one of the best-selling photography books of all time. Now an exhibition at the Society of Illustrators in New York sheds light on a master of the following generation—the painter and art historian Stanley Meltzoff (1917-2006)—and on artists’ challenge to respond originally to changing technology and fashion. Reflections: Secret Skin. When I was a boy, I had a religious-school teacher named Mr. 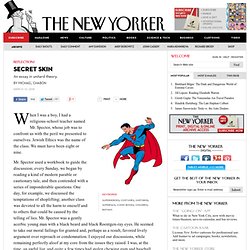 Spector, whose job was to confront us with the peril we presented to ourselves. Jewish Ethics was the name of the class. We must have been eight or nine. Mr. Spector used a workbook to guide the discussion; every Sunday, we began by reading a kind of modern parable or cautionary tale, and then contended with a series of imponderable questions. DFW_TV.pdf. Guitarist Link Wray Dies. Stargate and Ester Dean, Making Music Hits. The Cosmology of Serialized Television. In less propitious times, the poet X would have become a popular hack. 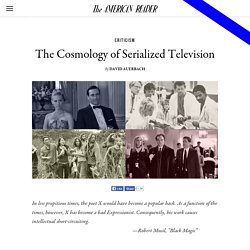 As a function of the times, however, X has become a bad Expressionist. Consequently, his work causes intellectual short-circuiting. —Robert Musil, “Black Magic” Mad Men began its sixth season by quoting from Dante’s Inferno—the first three lines. Joy by Zadie Smith. The Camera and the Color Line. Is It O.K. to Be a Luddite? - Thomas Pynchon. Www.nettime.org Nettime mailing list archives [Date Prev] [Date Next] [Thread Prev] [Thread Next] [Date Index] [Thread Index] Is It O.K. to Be a Luddite? 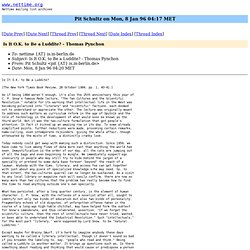 What Turned Jaron Lanier Against the Web? The Improbable is the New Normal. Cops, emergency room doctors, and insurance actuarists all know it. They realize how many crazy impossible things happen all the time. A burglar gets stuck in a chimney, a truck driver in a head on collision is thrown out the front window and lands on his feet, walks away; a wild antelope knocks a man off his bike; a candle at a wedding sets the bride’s hair on fire; someone fishing off a backyard dock catches a huge man-size shark. In former times these unlikely events would be private, known only as rumors, stories a friend of a friend told, easily doubted and not really believed. But today they are on YouTube, and they fill our vision.

Is It Art? Increasingly, That's a Judicial Decision. When did judges become the ultimate arbiters of art? Hardly a month goes by without a court being asked to settle a dispute over the nature of artistic meaning, expression or authenticity. These are the big-think questions that confound philosophers, art critics and artists themselves. But judges are regularly obliged to take on these questions—and their answers have huge consequences for what can and cannot be attempted by artists. Alex Nabaum Among the most recent legal tussles is a claim for damages involving one of Sol LeWitt's Wall Drawings. Shading the New Aesthetic. Feature image by Nathaniel Flagg. Storm Troupers: Celebrating Hurricane Sandy First Responders - Magazine. Have You Ever Tried to Sell a Diamond? - Magazine. The diamond invention—the creation of the idea that diamonds are rare and valuable, and are essential signs of esteem—is a relatively recent development in the history of the diamond trade.

Luxury Branding The Future Leaders Of The World. Watches have the same problem diamond jewelry has; it better be beautiful enough to keep forever, because if you try and sell it you'll discover there is no secondary market for it. How Repo Man got my cultural motor running. Harry Dean Stanton and Emilio Estevez in Repo Man. It was January 1985. Seeing the Future in Science Fiction. Some of my earliest memories are of science fiction. Machines of Loving Grace: Anticipating Advanced AI. Most technologists are ruled by logic, facts, 1's and 0's, and they tend to see and describe things from an obviously biased perspective. Nassim Nicholas Taleb: The future will not be cool. Close your eyes and try to imagine your future surroundings in, say, five, 10 or 25 years. Noam Chomsky: Why Americans Are Paranoid About Everything (Including Zombies) February 19, 2014 | Like this article?

Book Translates American Minutiae for Russians. Why We Took Cocaine Out of Soda - James Hamblin. Social injustice and "a most wonderful invigorator of sexual organs" When cocaine and alcohol meet inside a person, they create a third unique drug called cocaethylene. It's All About the Cow. ‘Faking It’ at the Met, a Photography Exhibition. Peter Schjeldahl: The Yale University Art Gallery Reopens. Wild Things: What Was Abstract Art? Fashion Backward: Tilda Swinton, Impressionist Paintings, and Haute Couture. The Real Fake. On the Movie Set of Director Ilya Khrzhanovsky's Dau. The Art of David Hidalgo, the Man of a Thousand Facelifts. Elephant. Pain of the New. Maria Popova: why we need an antidote to the culture of Google. "The Menace of Mechanical Music" J P Sousa, 1906. The Discriminating Philistine by Theodore Dalrymple. On Murder Considered as One of the Fine Arts.

The classic point of view, six lectures on painting : Cox, Kenyon, 1856-1919. The Secret Law of Page Harmony. Against aesthetics by William Logan. Malraux, Literature, and Art. Canon Fodder: Denouncing the Classics. Bakhtin Reframed. A user's guide to art-speak. Gold, Golden, Gilded, Glittering by Rachel Cohen. Art Basel: Why I’m not going. (Hint: It’s because the modern art world is the worst.) Art and Commerce Meet in Miami Beach. I Went to Art Basel and Tried to "Get" Art. OK, Do It: Teach Me How to "Get" Art. I'm Sick Of Pretending: I Don't "Get" Art. In Miami’s Wynwood district, the party has overtaken the art - Miami-Dade. Could boredom be curable? - Ideas.

Susan Sontag on the Creative Purpose of Boredom. The Strange Energies of Images, and the Humility of Language. All We Read Is Freaks. Future Classics: Readers of 1936 Predict Which Authors Will Endure. Adam Kirsch: Art Over Biology. Failure by Design. Seeing straight.