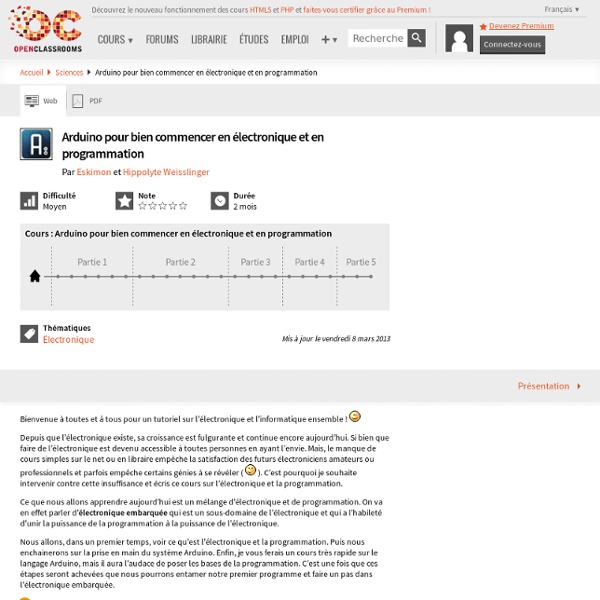 RFID Keepsake Box · Mike Buss A few years ago, I wanted to make something special for my girlfriend's birthday. After experimenting with an Arduino, I decided to try to make her a high-tech keepsake box that can lock or unlock with an RFID card. Here is the final result: I had read about the Reverse Geocache Puzzle by Mikal Hart and thought the idea was brilliant. I wanted to do something similar, but with a twist. 200+ Arduino Projects List For Final Year Students Arduino is a single-board microcontroller. It is intended to make the application of interactive objects or environments more accessible. The hardware consists of an open-source hardware board designed around an 8-bit Atmel AVR microcontroller, or a 32-bit Atmel ARM. Here, we are listing out some of the best and very useful arduino project ideas which are collected from different resources and are very interesting to implement them. Arduino is a single-board microcontroller.

Logisim Screen shot of Logisim 2.7.0 Note: Further Logisim development is suspended indefinitely. [More information] (11 Oct 2014) Logisim is an educational tool for designing and simulating digital logic circuits. Make your own smart watch Most IT companies participate in the race to grab people’s wrist. A smart watch becomes the most significant item in a wearable device category. You can easily find this mood in this link, there are tons of smart watches. But here is a simple way to evaluate smart watch’s future on your own.

Arduino and Python For a project (check out my blog for updates) I'm working on I needed to be able to communicate with my arduino, luckily the arduino can communicate though serial. It turns out almost any programming language can be used for serial communication but python seems to be the easiest so far. I had some problems getting it all to work and finding a basic tutorial online proved very difficult. So hopefully this guide will explain the basics to anyone that is looking to start using the serial functions that the arduino provides. Getting Started with ArduBlock DOWNLOAD Ardublock 1.Download ardublock-all.jar ArduBlock 2. In Arduino IDE, open menu “Arduino” -> “Preferences” 3. Find “Sketchbook location:” ARDUINO PROJECTS This sketch will readout RF power and SWR from any SWR bridge (for example 'monimatch' type). As this 'monimatch' type of bridge is frequency dependant, the meter must be calibrated for every band. Because my primary interest was for VHF/UHF/SHF, I have foreseen positions for 6m, 4m, 2m, 70 cm, 23cm and 13cm bands - but you can use the ARDUINO readout on HF as well.

MBox Few months ago I bought, as a present, an mp3 player for children called hörbert. It is really well made and the sound quality is pretty good. I really suggest as a product. The only problem is that it is quite expensive, so I thought that it would be a nice and easy project for a Christmas present for my daughter. It was already clear since the beginning that the project would be powered by an arduino uno. Your Arduino's inbuilt EEPROM Posted on 16 March 2011. Tags: arduino, ATmega1280, atmega168, atmega2560, ATmega328, atmel, binary, bit, byte, DIY, duemilanove, education, eeprom, eleven, freetronics, guide, guides, i2c, learn, lesson, lessons, mega, project, read, storage, tronixstuff, tutorial, tutorials, twentyten, uni, write This is chapter thirty-one of a series originally titled “Getting Started/Moving Forward with Arduino!” by John Boxall – A tutorial on the Arduino universe.

$9 ARDUINO Compatible STARTER KIT - Anyone can learn Electronics It was started as a campaign running for 35 days with the goal to manufacture at least 1,000 of these boards. A dream. It ended a week ahead of schedule after I had to limit the quantity to 15,000 boards. Jan Borchers My vCard (internal access only). Jan Borchers is full professor of computer science and head of the Media Computing Group at RWTH Aachen University. With his research group, he explores the field of human-computer interaction, with a particular interest in new post-desktop user interfaces for smart environments, ubiquitous computing, interactive exhibits, and time-based media such as audio and video. Before joining RWTH, he worked as assistant professor of computer science at Stanford University for two years, and briefly at ETH Zurich.