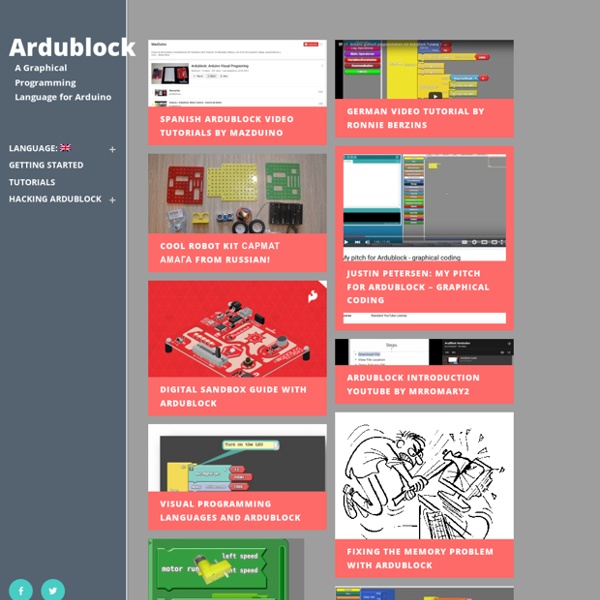 Easy Driver Examples Easy Driver Examples Sample code and projects to get your stepper running! Lots of folks buy EasyDrivers or BigEasyDrivers and then get them to work just fine in their project. But some don't, and so I thought it would be a good idea to write down some simple instructions for getting your Easy Driver working as quickly and easily as possible. All of these examples are going to be done with my Easy Driver and Big Easy Driver stepper motor driver boards driving several different random stepper motors I have lying around the lab. I will be generating the step and direction pulses with an Arduino UNO and a chipKIT UNO32, although all of these examples should work with any Arduino or Arduino clone or Arduino compatible (like all chipKIT boards).

200+ Arduino Projects List For Final Year Students Arduino is a single-board microcontroller. It is intended to make the application of interactive objects or environments more accessible. The hardware consists of an open-source hardware board designed around an 8-bit Atmel AVR microcontroller, or a 32-bit Atmel ARM. Here, we are listing out some of the best and very useful arduino project ideas which are collected from different resources and are very interesting to implement them. High Sensitivity Arduino Sound Level Detector Generally we want to sense the environment when something interesting is occurring. Sometimes the presence of sound is indicative of an interesting activity. If we can detect sound level we can trigger a sensing activity to capture information about the activity of interest.

Arduino and Python For a project (check out my blog for updates) I'm working on I needed to be able to communicate with my arduino, luckily the arduino can communicate though serial. It turns out almost any programming language can be used for serial communication but python seems to be the easiest so far. I had some problems getting it all to work and finding a basic tutorial online proved very difficult. Resources You had such a great time learning to solder your Simon that now you want to take that leap and learn how to program Arduinos. Luckily the Simon uses the same microcontrollers as Arduinos so you can learn how to add an analog sensors to the Simon and then reprogram it with a FTDI cable. Learn the four basic skills of microcontroller programming: Analog, Digital, Input and Output. Concepts that will be covered include: Software setupInput/ OutputDigital / AnalogSerial CommunicationInternal pull-up resistors PowerPoint Presentation Tutorial

Speech Synthesizer Synthesized speech was for a long time the Holy Grail of computing, and back in the 1980s when a 4MHz CPU made your computer the fastest machine in the neighborhood it just wasn't practical for software to create intelligible speech. In those days the only sensible way to generate speech was to offload the task to dedicated hardware because the CPU simply couldn't keep up. The most widely used speech chip through the 80s and early 90s was the famous SPO256A-AL2, the allophone speech processor. It was used in toys, in external speech synthesizer peripherals for desktop computers, in industrial control systems, and all sorts of other unexpected places. Then as CPU power continued to increase rapidly speech synthesis was moved to being a software function, and nowadays of course it is almost always done entirely in software by the main CPU using only a tiny fraction of the available processing power.

MINI Night Lamp : 11 Steps (with Pictures) - Instructables this project is inspired by Mohit Boite. Electronics is a very big ocean and to explore it today I made a small lamp mini night lamp which is controlled by Arduino microcontroller. The concept is simple, all you need is an LDR ( light-sensitive diode), few LEDs, and a few resistors.