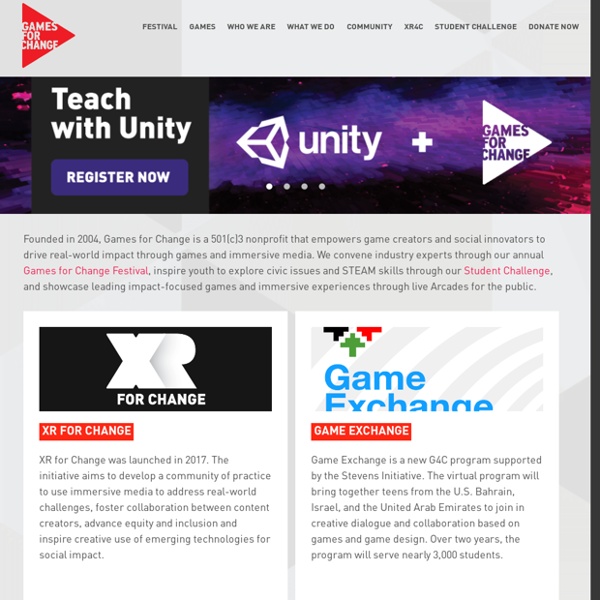 What People are Playing The first interactive project told from a Northern Cheyenne perspective. game details Experience hazards facing migrants and Border Patrol along border. game details Fight to be king of the (ant)hills in this real-time strategy game. game details Enter the gateway to a new, ground-breaking level of meditation technology and get swept away. game details An interactive roleplaying game that helps build knowledge and skills on how to talk with their game details

1979 Revolution: Black Friday - Games For Change 1979 Revolution: Black Friday is choice driven, narrative game that brings players into the brooding world of a nation on the verge of collapse. Play as Reza, an aspiring photojournalist, and make life and death decisions as you survive the gritty streets of Iran in the late 1970’s. The year is 1978, the place is Tehran, Iran. Solving the World - Serious Games Require Serious Gamers Every day gamers go into fictional spaces to save the world. They go on quests to save the Mario Galaxy, battle evil in Azeroth, and improve their lots in Farmville. Millions of gamers spend in the area of 3 billion hours a week solving the difficult and challenging problems of hundreds of fictional worlds and thousands of quests. Until lately that didn't really have much of an effect on the real world.

Persuasive Games A book about how videogames make arguments: rhetoric, computing, politics, advertising, learning. Videogames are both an expressive medium and a persuasive medium; they represent how real and imagined systems work, and they invite players to interact with those systems and form judgments about them. In this innovative analysis, Ian Bogost examines the way videogames mount arguments and influence players. Drawing on the 2,500-year history of rhetoric, the study of persuasive expression, Bogost analyzes rhetoric’s unique function in software in general and videogames in particular. The field of media studies already analyzes visual rhetoric, the art of using imagery and visual representation persuasively.

Build Model Atoms and More on the NOVA Elements App NOVA Elements for iPad is an excellent iPad app for helping students learn about the periodic table of elements. The app is "hosted" by NY Times technology reviewer David Pogue. There are three primary features of the app. Games for Change New logo - 06/19/11 Games for Change (also known as G4C) is a movement and community of practice dedicated to using digital games for social change. An individual game may also be referred to as a "game for change" if it is produced by this community or shares its ideals. "Games for Change" is also the name for the non-profit organization which is building the field by providing support, visibility, and shared resources to individuals and organizations using digital games for social change.[1]

80 Days - Games For Change The year is 1872 (with a steampunk twist) and Monsieur Phileas Fogg has wagered he can circumnavigate the globe in less than 80 days. Traveling by African airship, mechanical camel, submarine in the company of pirates, opium traders, smugglers and more, attempt to complete the epic journey around the world. 80 DAYS allows players to create their own route around the world, starting from London and visiting any of a hundred and fifty cities en route. In each location, there are individual, personal stories to engage with, that draw on historical events, cultural details, and flights of wild invention in equal measure.

Game Theory, Popular Science On test day for my Behavioral Ecology class at UCLA, I walked into the classroom bearing an impossibly difficult exam. Rather than being neatly arranged in alternate rows with pen or pencil in hand, my students sat in one tight group, with notes and books and laptops open and available. They were poised to share each other's thoughts and to copy the best answers. As I distributed the tests, the students began to talk and write. Bartle's Taxonomy of Player Types (And Why It Doesn't Apply to Everything) Richard Bartle co-created MUD (Multi-User Dungeon), the text-based precursor to today's MMORPGs, while studying at Essex University. He ended up formulating the theory that all MUD players could be broken down into four main types: killers, achievers, explorers, and socializers. This theory has since been used in all sorts of game design situations where it doesn't apply - let's look at what exactly it does tell us. MUD is a text-based adventure game (no graphics at all, only text) that had the then-unique attribute of being able to be played alongside other human players. It was one of the first online persistent worlds created, and you can still grab a MUD client today, connect to a server and play.

About: Participatory Science Platform - Science Into Action Participatory Science Platform (PSP) – What is it? The Participatory Science Platform (PSP) initiative was identified in the Science in Society strategic plan, A Nation of Curious Minds, and developed by the Ministry of Business, Innovation and Employment (MBIE) and the Ministry of Education with close involvement of the Prime Minister’s Chief Science Advisor. The PSP builds on the popularity of citizen science, but rebalances the relationship between the lay person and scientist through a highly collaborative approach. MBIE has initiated and funded three PSP pilots in Otago, Taranaki and South Auckland, with the intent to be evaluate these pilots over 2016/17. For further information about the PSP initiative nationally please see: www.curiousminds.nz/psp or contact: Dr.

Game for Change: Fate of the World New Computer Game Simulates Challenges of Global Warming A British company has developed a new computer game that allows players to save the planet from the effects of global warming — at least in a simulated setting. “Fate of the World,” produced by the gaming company Red Redemption, places players at the head of a global environmental organization — a “UN with teeth” — charged with saving the world over the next 200 years in the face of rising temperatures, diminishing resources, disappearing ecosystems, and growing population.

Akrasia - Games For Change The game is set in a maze that represents the mind. The maze has two states – a normal and a psychedelic state. To enter the game, the player has to collect a pill-shaped object and thus enters the game as “addict”. From “chasing the dragon” and the experience of dependency to working your way through “cold turkey stage” where willpower is mapped onto navigation skills, this game models the essential dimensions of the addiction gestalt as identified by its creators. Depending on player behavior and choice, the game can have various outcomes that reflect this behavior. Someone who tries to shake the habit as quickly as possible will find herself in a different situation at the end of the game than someone who indulged in chasing the high.

Learning Analytic for Digital Game-Based Learning There is an overlooked opportunity in games – big data generated in the interactions through gaming. Game based learning is great, it’s learning-by-doing with lower costs in many cases, it’s focused on problem solving, it improves students motivation. But when we suggest teachers to use serious games to teach their students, the first question that it comes to their minds is: “Well, I like the idea, but… How do I assess this?”, or “How do I know it works for everyone?”

Game Studies - Home Welcome to the official site of the ICA Game Studies Division (GSD)! The study of games and the game experience offers opportunities for the study of human communication that involve multidisciplinary approaches that merge the disciplines of conventional communication studies and research, arts and visual design, cognitive studies, computer sciences, cultural studies, engineering social sciences, health sciences, and information design. Although the common ground for the Game Studies Division is digital and video games, the group encompasses a broad range of inquiry topics and methods. The group serves as fertile meeting ground for the exchange of ideas among a very broad spectrum of disciplines and hosts a number of activities at ICA's annual conference. As the 2015 ICA Puerto Rico conference has passed, the Division is not actively accepting paper or panel proposals.

Citizen Science Project - NZ Landcare Trust 'Citizen Science Meets Environmental Restoration: measuring success through monitoring' is a three year project funded with support from MfE's Community Environment Fund, that aims to improve the leadership, strategic direction and coordination of citizen science in New Zealand. ‘Citizen Science’ involves community volunteers using practical field monitoring tools, that meet scientific best practice, to report on the state of their local environment. Key activities of the project include: • growing support for citizen science in New Zealand • determining the scope and availability of citizen science monitoring tools and training • investigating approaches for enabling and expanding community-based environmental monitoring • promoting more effective use of data from community monitoring • sharing findings through a national symposium Subscribe to NZ Landcare Trust's e-newsletter on the home page to make sure you don't miss out on any news or announcements linked to this project.

Great site for overview of different gaming options and what specific games are out there for change. by dpvagabond Mar 30