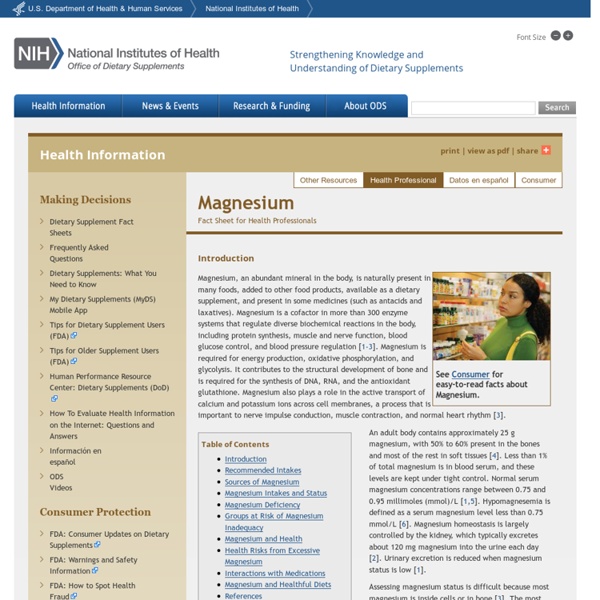 Introduction See Consumer for easy-to-read facts about Magnesium. Magnesium, an abundant mineral in the body, is naturally present in many foods, added to other food products, available as a dietary supplement, and present in some medicines (such as antacids and laxatives). Magnesium is a cofactor in more than 300 enzyme systems that regulate diverse biochemical reactions in the body, including protein synthesis, muscle and nerve function, blood glucose control, and blood pressure regulation [1-3]. Magnesium is required for energy production, oxidative phosphorylation, and glycolysis. It contributes to the structural development of bone and is required for the synthesis of DNA, RNA, and the antioxidant glutathione. An adult body contains approximately 25 g magnesium, with 50% to 60% present in the bones and most of the rest in soft tissues [4]. Assessing magnesium status is difficult because most magnesium is inside cells or in bone [3]. Recommended Intakes *Adequate Intake (AI) Food

ARL : Basic Ratios and Their Meaning Basic Ratios and Their Meaning Introduction Balance in all phases of life is critically important to maintain health and this principle applies to mineral levels in hair analyses. What is a mineral ratio? Journal of Neural Engineering Dominique M Durand et al 2014 J. Neural Eng. 11 020201 Neural engineers have made significant, if not remarkable, progress in interfacing with the nervous system in the last ten years.

Mark Hyman, MD: Magnesium: The Most Powerful Relaxation Mineral Available A deficiency in this critical nutrient makes you twice as likely to die as other people, according to a study published in The Journal of Intensive Care Medicine.(i) It also accounts for a long list of symptoms and diseases -- which are easily helped and often cured by adding this nutrient. In fact, in my practice, this nutrient is one of my secret weapons against illness. Yet up to half of Americans are deficient in this nutrient and don't know it. I'm talking about magnesium. Magnesium: Why You Need It Magnesium (Mg) may be the most overlooked mineral. No one has yet popularized a simple way to remember it, in the way that we usually associate potassium with bananas, calcium with bone health, and sodium with blood pressure. But magnesium is an incredibly versatile and important nutrient that many doctors, nutritionists, and researchers believe is the single most important nutrient for human health. It is essential for over 300 different chemical reactions in the body, including maintaining your energy level, helping you relax, and sustaining the health of your heart and blood vessels.

Blog - The Definitive Guide To Magnesium & Magnesium Supplements Magnesium is the second most abundant mineral inside our cells and the second most common deficiency, next to Vitamin D. Recently scientists have discovered the ‘Magnesome’, a protein encoding gene incorporating Magnesium, suggesting that the levels of Magnesium in the body may epigenetically alter the expression and behaviour of some of the proteins in our bodies, so altering the expression of health or disease of tissues. These scientists concluded that “Presently we can annotate some 5% of the human genome as inheriting the capability of binding Magnesium ions.” (Piovesan et al. 2012) 0.05% of our body weight is Magnesium. (20-28gm). Magnesium is found naturally in dark leafy vegetables, beans, nuts, seeds and whole grains, all of which take their Magnesium from the soil.

Active B12 therapy and methylation FAQ An Index to ‘B-12 the Hidden Story’ When I discovered methylation and B12 therapy, I became obsessed with understanding it (and my startup reaction). I read through the entire ‘Hidden Story‘ thread (maybe 80 hours worth) on Phoenix Rising (and watched all of the methylation videos I could get my hands on). It seemed to me that lots of valuable information was buried in the ‘Hidden Story’ and I wanted to make it accessible to people without the time on their hands (or clarity) to read 2,750+ posts. So here, I’ve pulled out the discussion that might interest the greatest number of readers. Mind Reading (Neural Decoding) Goes Mainstream Surfdaddy Orca November 9, 2009 In the new movie, The Men Who Stare at Goats, reporter Bob Wilton confronts Special Forces operator Lyn Cassady, “I’ve heard that you’re a psychic spy.” Lyn later comments, “We’re Jedi.

Magnesium and Its Health Benefits By Dr. Mercola You don't hear much about magnesium, yet an estimated 80 percent of Americans are deficient in this important mineral and the health consequences of deficiency are significant. One reason could be because magnesium, like vitamin D, serves so many functions it's hard to corral.As reported by GreenMedInfo1, researchers have now detected 3,751 magnesium binding sites on human proteins, indicating that its role in human health and disease may have been vastly underestimated.

About Us Mission: The Center for Magnesium Education & Research is dedicated to the Health of Humankind by promoting knowledge of nutritional magnesium and its peer-reviewed science. We are Independent Scholars Andrea Rosanoff, Ph.D. is Director of Research & Science Information Outreach for the Center.