[From pages 8 and 9 of the Catholic Mirror of Sept. 23, 1893] "Halting on crutches of unequal size, One leg by truth supported, one by lies, Thus sidle to the goal with awkward pace, Secure of nothing but to lose the race. 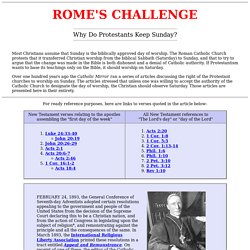 " In the present article we propose to investigate carefully a new (and the last) class of proof assumed to convince the Biblical Christian that God had substituted Sunday for Saturday for His worship in the new law, and that the divine will is to be found recorded by the Holy Ghost in apostolic writings. We are informed that this radical change has found expression, over and over again, in a series of texts in which the expression, "the day of the Lord," or "the Lord's day," is to be found. Sermon of the Archbishop of Reggio to the Council of Trent on the Power of the Church. Source Documentation. 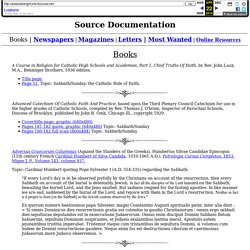 Sunday Fraud: Church "Fathers" on the Lord's Day. Analysis of Common Quotations from by Bob Pickle Introduction The quotations under discussion in this paper can be found posted on a number of web sites. 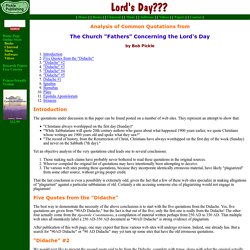 HISTORY OF SABBATH AND THE FIRST DAY. HISTORY OF THE SABBATHAND THE FIRST DAY OF THE WEEK4th edition In this chapterPages 281-311 Seeking the missing link Were martyrs of Pliny’s time tested whether they kept the Lord’s day, As Justin Edwards affirms Domville’s telling refutation The correct time and question Ignatius’s spurious epistles still more interpolatedJustin Martyr’s designation of the first day changedTheophilus of Antioch, or of Alexandria? 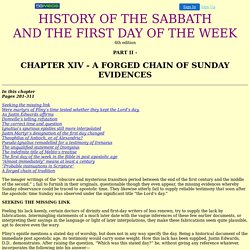 Pseudo-Ignatius remodelled for a testimony of IrenaeusThe unqualified statement of DionysiusThe indefinite title of Melito’s treatiseThe first day of the week in the Bible in post apostolic age“Almost immediately” means at least a century“Probable insinuations in Scripture”A forged chain of tradition Feeling his lack keenly, certain doctors of divinity and first-day writers of less renown, try to supply the lack by fabrications.

70. 217 - The Crime Of All Ages. Is Sunday Really Sacred? A Wrong Turn One of David’s most beautiful prayers is recorded in Psalm 43:3. 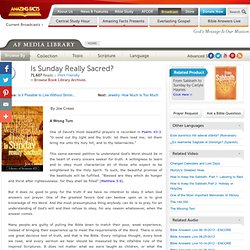 “O send out thy light and thy truth: let them lead me; let them bring me unto thy holy hill, and to thy tabernacles.” This same earnest petition to understand God’s Word should be in the heart of every sincere seeker for truth. A willingness to learn and to obey must characterize all of those who expect to be enlightened by the Holy Spirit. To such, the beautiful promise of the beatitude will be fulfilled.

Feast Days and Sabbaths. How many commandments are contained in the Ten Commandments? 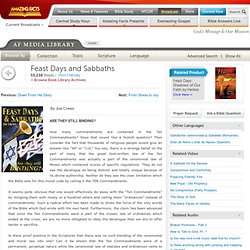 Does that sound like a foolish question? Then consider the fact that thousands of religious people would give an answer like “94” or “110.” You see, there is a strange belief on the part of many that the great God-written law of the Ten Commandments was actually a part of the ceremonial law of Moses which contained scores of specific regulations. Beware of the "Lunar Sabbath" Q&A with JR Cofer: SEVEN REASONS TO LEAVE THE LUNAR SABBATHS ALONE. Rabbinc non-authority and the lunar sabbath. Torah Jew - Debunking the Lunar Sabbath! Lunar Sabbath is a Lie [be careful of other material]

There has been a new doctrine floating about Sabbath keeping Christians the last few years that I honestly thought would never go as far as it has when I saw it rear its ugly head in my neck of the woods back a couple of years ago. 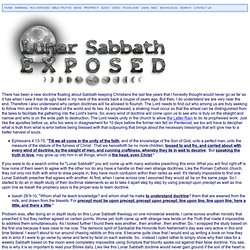 But then, I do understand we are very near the end. Therefore I also understand why certain doctrines will be allowed to flourish. Lunar Sabbath/Luni-Calendar. Response to Lunar Sabbath. FeastDays.pdf (application/pdf Object) Feast Days. Why These Pages Have Been Written What Was the Purpose of Old Testament Feast Days? 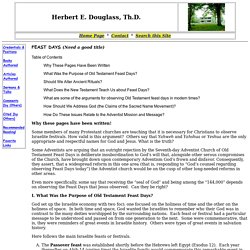 Should We Alter Ancient Rituals? What are some of the arguments for observing Old Testament feast days in modern times? How Should We Address God (the Claims of the Sacred Name Movement)? How Do These Issues Relate to the Adventist Mission and Message? Israelitefestivals.pdf (application/pdf Object) The Cross and It's Shadow. Don't Be Fooled. Bricks Without Straw. Bricks Without Straw. Lesson 7 Before Moses approached the king of Egypt to seek freedom for the children of Israel, he and his brother, Aaron, met with the oppressed leaders of Israel. 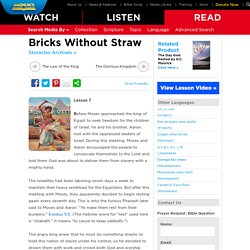 During this meeting, Moses and Aaron encouraged the people to consecrate themselves to the Lord and told them God was about to deliver them from slavery with a mighty hand. History's Greatest Hoax. The Rest Of The Story. Why God Said Remember. What Could He Do? 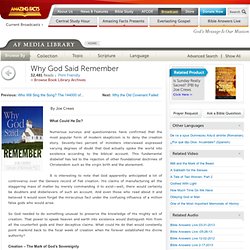 Numerous surveys and questionnaires have confirmed that the most popular form of modern skepticism is to deny the creation story. Seventy-two percent of ministers interviewed expressed varying degrees of doubt that God actually spoke the world into existence according to the biblical account. This fundamental disbelief has led to the rejection of other foundational doctrines of Christendom such as the virgin birth and the atonement.

It is interesting to note that God apparently anticipated a lot of controversy over the Genesis record of fiat creation. The Lost Day of History. Did you know there is a very important day that almost everyone has forgotten about? It's astounding that only a few people are aware of it, because it's one of the most significant days in all of human history! It's not only a day in the past, but the present and future. Furthermore, what happened on this neglected day can have a profound effect on your life. Want to know more amazing facts about this lost day of history? Then read over this Study Guide carefully. When Jesus was here on earth, He worshiped on the Sabbath. 1.

"And he came to Nazareth, where he had been brought up: and, as his custom was, he went into the synagogue on the sabbath day, and stood up for to read. " Sabbath Truth > Home. Sabbath Truth > Free Resources > Seventh Day Video Series. What is the Sabbath? Host Hal Holbrook takes you on an eye-opening journey through history to explore the seventh-day Sabbath. Discover how Sunday observance eventually trumped Saturday Sabbath-keeping in the early church, why this controversy is barely known, and the amazing unknown history behind this divine day! Presented and produced by LLT Productions, this enlightening series is available in a 5-DVD set.

Click here to support LLT Productions and their continuing efforts to produce more exciting videos. THE FIRST ANGEL'S MESSAGE: THE EVERLASTING GOSPEL. THE THIRD ANGEL'S MESSAGE: The Mark of the Beast 666. Sabbath Keeper Profile - A.H. Lewis. May-June 1998 Volume 50, No. 3, Issue No. 471 Sabbath Keeper Profile - Abram Herbert Lewis (1832-1908) In 1908 at the funeral of Dr. Abram Herbert Lewis, his pastor, Dr. Edwin Shaw said of him: "Although he took so eminent a place in so many fields of activity, yet that which most distinguishes him, was the recognized fact that he was "the representative Seventh Day Baptist of his age.