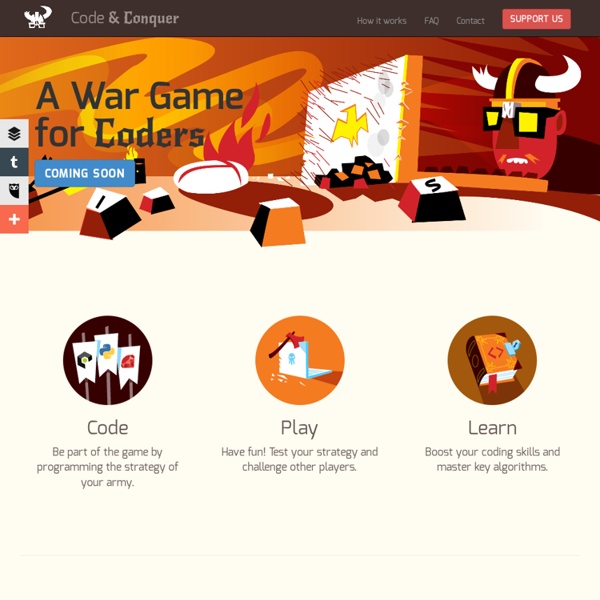 Most Important: Have Fun. And earn some badges. See how your strategy works out in different scenarios, challenge other players, receive points, earn badges and climb your way to the top of the leaderboard. Boost your coding skills. Do it playing. This game provides the perfect setting to introduce the key concepts employers ask you to know.

CSS3 Animation Cheat Sheet - Justin Aguilar How it works The CSS3 Animation Cheat Sheet is a set of preset, plug-and-play animations for your web projects. All you need to do is add the stylesheet to your website and apply the premade CSS classes to the elements you want animated. Stencyl Build Worlds If you're used to graphics editors like Photoshop, you'll feel right at home in the Scene Designer. Familiar features, such as a selection tool, zooming, grid-snapping and flood fill, will help you quickly craft complex worlds out of Actors, Tiles and Terrain. Create Actors Drop in graphics from your computer to create Actors on the fly.

XML to XSD Generater Online - xmlGrid.net Create XML Schema from an XML Document How to generate/create a schema xsd from an XML document? Step 1: load XML file. You can copy and paste your XML data to the XML Data box, then click Load button. Scrum is the new waterfall Scrum while great in theory is in practice a really flawed process of creating software. Scrum is iterative waterfall. Scrum is process hell. Saying this, may get me shunned and kicked out of the Agile club. 13 programming languages defining the future of coding Faster, smarter programming, with fewer bugs. Those are the promises coming from the creators of the latest round of languages to capture the attention of programmers. Yes, they're the same buzzwords we've heard before, but lack of novelty is no reason to dismiss them. The future of coding requires stability and good practices so our innovations will work. In fact, our projects are often so much bigger now, we need the innovation more than ever.

Nxml Mode For XHTML I looked at a number of different modes for authoring HTML, including HtmlMode, PsgmlMode, HtmlHelperMode, HtmlModeDeluxe, but I decided to use the wonderful NxmlMode instead. This has the advantage of providing validation as you type and excellent auto-completion facilities. There is a catch, though, and that is that you have to write XHTML (HTML expressed as a dialect of XML) rather than SGML or HTML). This is not really a big deal, but I thought I’d record my experience here. Introduction to Functional Programming Broadly speaking, functional programming is a style of programming in which the primary method of computation is the application of functions to arguments. Among other features, functional languages offer a compact notation for writing programs, powerful abstraction methods for structuring programs, and a simple mathematical basis that supports reasoning about programs. Functional languages represent the leading edge of programming language design, and the primary setting in which new programming concepts are introduced and studied. All contemporary programming languages such as Hack/PHP, C#, Visual Basic, F#, C++, JavaScript, Python, Ruby, Java, Scala, Clojure, Groovy, Racket, … support higher-order programming via the concept of closures or lambda expressions.

Regular Expressions Demystified: RegEx isn’t as hard as it looks Have you stayed off from Regular Expressions because they look complex. Grok them in this 30-minute practical guide. Image from Are you one of those people who stay away from RegExp because it looks like a foreign language? ​Learn to use GitHub with GitHub Learning Lab Video: GitHub: EU copyright crackdown could hurt open-source development The most popular open-source development site in the world is GitHub. It's used by tens of millions of developers to work on over 80 million projects.

Clearfix: A Lesson in Web Development Evolution Share this: Ship custom analytics today with Keen.io. The web community has, for the most part, been a spectacularly open place.