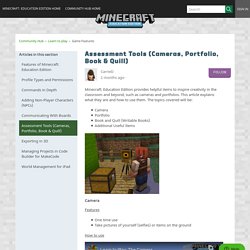 This article explains what they are and how to use them. The topics covered will be: CameraPortfolioBook and Quill (Writable Books)Additional Useful Items Camera Features. Category:JavaScript - Rosetta Code. JavaScript This programming language may be used to instruct a computer to perform a task. 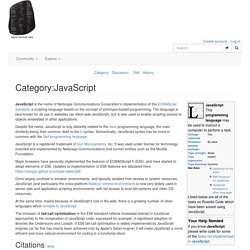 Listed below are all of the tasks on Rosetta Code which have been solved using JavaScript. JavaScript is the name of Netscape Communications Corporation's implementation of the ECMAScript standard, a scripting language based on the concept of prototype-based programming. The language is best known for its use in websites (as client-side JavaScript), but is also used to enable scripting access to objects embedded in other applications.

Despite the name, JavaScript is only distantly related to the Java programming language, the main similarity being their common debt to the C syntax. Semantically, JavaScript syntax has far more in common with the Self programming language.   Google Developers. Python has a built-in string class named "str" with many handy features (there is an older module named "string" which you should not use). 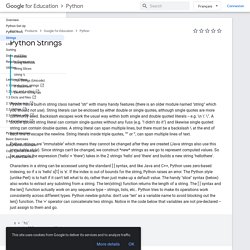 String literals can be enclosed by either double or single quotes, although single quotes are more commonly used. Backslash escapes work the usual way within both single and double quoted literals -- e.g. \n \' \". A double quoted string literal can contain single quotes without any fuss (e.g. "I didn't do it") and likewise single quoted string can contain double quotes. Python strings are "immutable" which means they cannot be changed after they are created (Java strings also use this immutable style). Guys, REST APIs are not Databases – Thiago Marini. One of the common mistakes developers make regarding REST APIs is to treat them as databases. 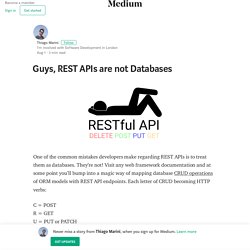 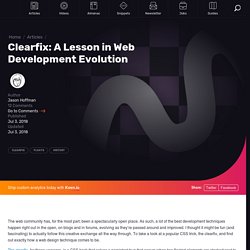 The web community has, for the most part, been a spectacularly open place. As such, a lot of the best development techniques happen right out in the open, on blogs and in forums, evolving as they’re passed around and improved. I thought it might be fun (and fascinating) to actually follow this creative exchange all the way through. To take a look at a popular CSS trick, the clearfix, and find out exactly how a web design technique comes to be. ​Learn to use GitHub with GitHub Learning Lab. Video: GitHub: EU copyright crackdown could hurt open-source development The most popular open-source development site in the world is GitHub. 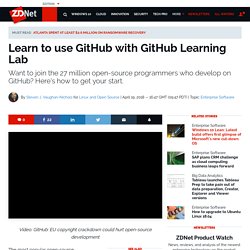 It's used by tens of millions of developers to work on over 80 million projects. It's not just a site where people use Linus Torvalds' Git open-source distributed version control system. It's also an online home for collaboration, a sandbox for testing, a launchpad for deployment, and a platform for learning new skills. The GitHub Training Team has now released an app, GitHub Learning Lab, so you can join the programming party. How to Create and Publish a Chrome Extension in 20 minutes. Webdesign.tutsplus. Regular Expressions Demystified: RegEx isn’t as hard as it looks. Everything you need to know about tree data structures. CSS Architecture and the Three Pillars of Maintainable CSS — SitePoint. Nxml Mode For XHTML. 13 programming languages defining the future of coding. 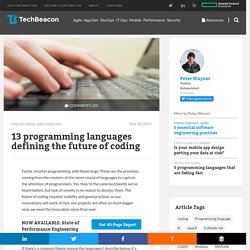 Those are the promises coming from the creators of the latest round of languages to capture the attention of programmers. Scrum is the new waterfall. Scrum while great in theory is in practice a really flawed process of creating software. 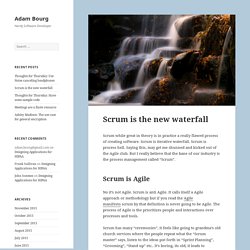 Scrum is iterative waterfall. XML to XSD Generater Online - xmlGrid.net. Create XML Schema from an XML Document How to generate/create a schema xsd from an XML document? 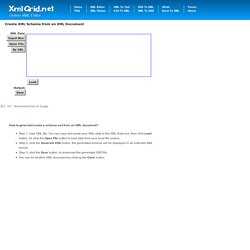 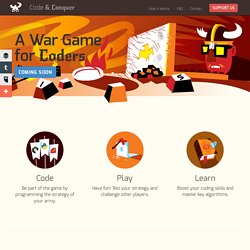 And earn some badges. See how your strategy works out in different scenarios, challenge other players, receive points, earn badges and climb your way to the top of the leaderboard. Boost your coding skills. Do it playing. This game provides the perfect setting to introduce the key concepts employers ask you to know. CSS3 Animation Cheat Sheet - Justin Aguilar. How it works The CSS3 Animation Cheat Sheet is a set of preset, plug-and-play animations for your web projects. All you need to do is add the stylesheet to your website and apply the premade CSS classes to the elements you want animated. The CSS3 Animation Cheat Sheet uses CSS3 @keyframes and works on all the latest browsers (that's IE 10). Using CSS3 @keyframes, you don't have to worry about positioning the element to accomodate the animations - it will animate into place. Also for users with older browsers, the animated element will be visible and in place, even if the animation doesn't trigger.

Introduction to Functional Programming. Broadly speaking, functional programming is a style of programming in which the primary method of computation is the application of functions to arguments. Among other features, functional languages offer a compact notation for writing programs, powerful abstraction methods for structuring programs, and a simple mathematical basis that supports reasoning about programs. Functional languages represent the leading edge of programming language design, and the primary setting in which new programming concepts are introduced and studied. All contemporary programming languages such as Hack/PHP, C#, Visual Basic, F#, C++, JavaScript, Python, Ruby, Java, Scala, Clojure, Groovy, Racket, … support higher-order programming via the concept of closures or lambda expressions. This course will use Haskell as the medium for understanding the basic principles of functional programming.