Best Programming Languages to Learn in 2013: The Elite Eight 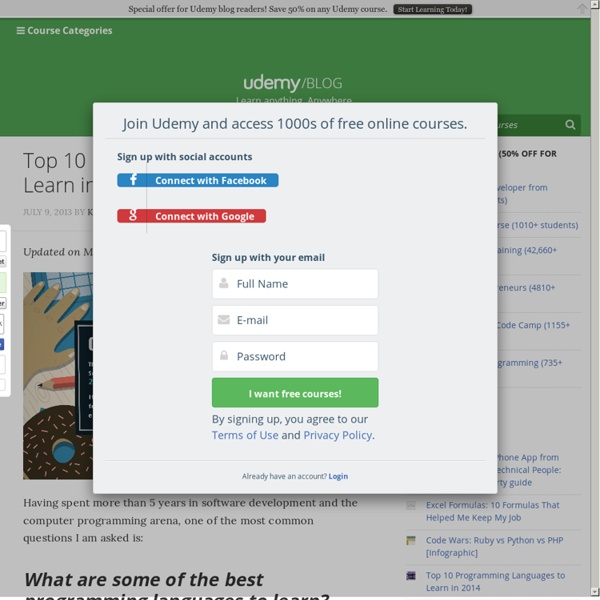 Updated on May 5, 2014 Having spent more than 5 years in software development and the computer programming arena, one of the most common questions I am asked is: This is a question that is asked by beginners, as well as experts. As with many important questions, the answer is not simple. There are many factors that should be taken into account while deciding a programming language to learn. Technology evolves in matter of weeks and by the time you become expert in a particular software technology, it can already be considered obsolete. In addition to that, another interesting aspect of programming that I noticed is that not only programmers and software engineers are interested in learning new programming languages, but people from totally different walks of life are also into it. Now back to the top 10. 1. I vividly remember that the first programming language course that I had in my university was of C language. 2. 3. Java was developed by James Gosling, in 1990 at Sun Microsystems. 5.

36 Resources To Help You Teach Kids Programming As a parent, I am always looking at what my children are learning and what they like. As a software developer, I hope that my daughters embrace their inner geek one day and get involved with technology. That being said, I was wondering at what age kids should learn programming and what resources there are to teach kids programming. I found that some people were starting the education as early as 6 years old. Now that we have addressed the age issue, the big question is what programming language should the child learn? Traditional Languages This section will probably draw the most criticism. Lisp and Scheme are used heavily in research oriented universities when teaching an introduction to programming and the theory of programming. Learning Environments And Other Things In addition to the traditional languages above, there are websites and interactive environments that focus on teaching children. References

BeagleBoard.org - community supported open hardware computers for making Rethinking Programming Language Tutorials Imagine you've never programmed before, and the first language you're learning is Lua. Why not start with the official book about Lua? Not too far in you run across this paragraph: The table type implements associative arrays. All right, where to start with this? I've only dissected two sentences of that paragraph so far. Really, I should stop, but I can't resist the declaration "Lua uses tables to represent packages as well." I don't mean to single out Lua here. To really learn to program, you have to go around in circles and absorb a lot of information. Programming language tutorials shouldn't be about learning languages. If you want to learn to play guitar, the wrong approach is to pick up a book about music theory and a chart showing where all the notes are on the fretboard. Not all tutorials are this way. I'll give a real example of how "Image Processing in Lua" could work. function intensity(r, g, b) return r*0.3 + g*0.6 + b*0.1 end intensity(255, 255, 255) and it does: 255.

What's the Best Language for a Beginning Programmer? PRINT "Hello World" There was a time when you could type those words into any home computer and get it to say "Hello World," because virtually all of them came with BASIC (Beginner's All-purpose Symbolic Instruction Code). As a programming language, BASIC was generally reviled by digital elitists. But everyone had it, and it gave a lot of youngsters their start in computer science. Those days are long gone—Microsoft, for instance, stopped including BASIC in its PC operating system after Windows 95. "I recommend the programming language that we picked for the book: Python," Sande says. In addition, he says many companies use Python for real-world projects, so a student could go on to use it professionally. As for what is being used in schools to teach programming, it turns out that Python does, indeed, have a following in American high schools. • Java, 49 percent. • Scratch, 34 percent. • Alice, 30 percent. • Microsoft Visual Basic, 30 percent. • C++ or C#, 18 percent.

5 Tools to Introduce Programming to Kids Digital Tools Arduino It’s hard to argue with the importance of teaching students how to use computers — how to turn on, log on, search the Web, and use applications. These skills are absolutely necessary for students’ academic success as well as for their future job prospects. Being able to use the Internet and operate computers is one thing, but it may be just as valuable to teach students how to code. Many students don’t have access to computer science courses until college, and that’s a missed opportunity to introduce younger students to programming. Developed by the MIT Media Lab, Scratch is a visual programming language for children age 6 and up. Alice is a free and open source 3D programming environment designed to teach students object-oriented and event-driven programming. Hackety Hack is an open source application that teaches the basics of programming in the popular Ruby language. One of the most popular toys in history, Lego may be best known for its brick-building. Related