Reflector.app - AirPlay mirroring to your Mac or PC, wirelessly. 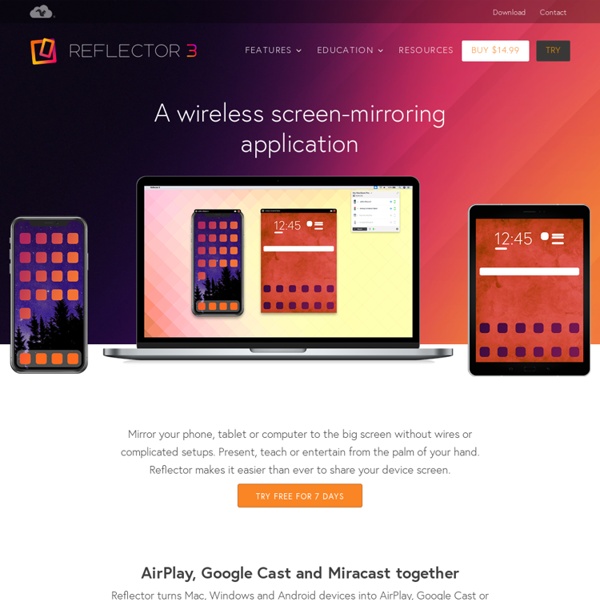 Wireless mirroring for everyone. Reflector is an AirPlay receiver that allows you to wirelessly display your iPad or iPhone on a number of devices. It’s available for Mac, PC and most Android devices. Mirror your device on a big screen without wires or complicated setups. Play games, watch movies, demo apps or present on the big screen from your iPhone or iPad. With Reflector, everything you do on your phone or tablet is wirelessly streamed to your computer or Android device. AirPlay Mirroring is built in to the device. Reflector is an AirPlay receiver that accepts wireless mirroring and streaming connections. Reflector enables iOS mirroring TO Powerful Features Record * Record your iPhone, iPod or iPad without wires or extra software. Multiple Devices Mirror multiple devices to one computer for side-by-side app comparisons, multiple presenters, competition, screen monitoring and more. Password Protection Password protect Reflector to limit access and keep unwanted presenters out.

Screen Recording and Screencasting Software - ScreenFlow Overview - Telestream Highest Quality Recording ScreenFlow has the best screen recording available – even on retina displays. Built in Stock Media Library Spice up your videos with access to over 500,000 unique media clips from directly within your ScreenFlow projects. iOS Recording Record your iPhone or iPad screen for high quality app demos. Are Educational iPad Games Really Educational? There's no such thing as too much education, right? As iPads have become ubiquitous, companies have rushed to develop educational games that teach math, physics and even urban planning. But many of these games are only "educational" in the loosest sense of the term, and almost none have been tested in rigorous studies, say scientists. The ones that have been tested show modest results. "It turns out to be pretty hard to make games or content that are better than school," said Jeremy Roschelle, director of the Center for Technology in Learning at SRI International, a nonprofit research institute in Menlo Park, Calif. And when iPad games are educational, they usually aren't as compelling as games designed solely to be fun and entertaining, Roschelle said. [7 Addictive Educational iPad Games]

The Basics of Signed and Unsigned Numbers This lesson is intended to demonstrate the basics behind "signed" and "unsigned" numbers. This lesson is not specific to any programming language, including C. We have already discussed that computers represent all data as binary. We also discussed that it is impossible to distinguish between one data type and another just by looking at it, because any given sequence of binary could be part of absolutely anything such as a number, text, a movie, or even a program. For this lesson, we are going to only discuss numbers. Lets examine the following binary number: Google URL Shortener Posted by Michael Hermanto, Software Engineer, Firebase We launched the Google URL Shortener back in 2009 as a way to help people more easily share links and measure traffic online. Since then, many popular URL shortening services have emerged and the ways people find content on the Internet have also changed dramatically, from primarily desktop webpages to apps, mobile devices, home assistants, and more. To refocus our efforts, we're turning down support for goo.gl over the coming weeks and replacing it with Firebase Dynamic Links (FDL).

YALSA's Teen Book Finder YALSA's Teen Book Finder is a free online database and app to help teens, parents, librarians and library staff, educators, and anyone who loves YA literature access nearly 4,000 titles recognized YALSA's awards and lists on their smartphone. Have an Android phone? Download the Android version now! Have an iPod Touch or an iPhone? Most Popular Social Media Sites Review: Why Women Are The Real Power Behind The Huge Success Of Pinterest and Tumblr and David Adelman We had fun checking social media demographics surveys from different credible sources like Pew Research Center and Burst Media and we were able to pluck out some distinct patterns that suggest women are taking over social media and we’ve turned the data into a nice infographic. The infographic that our journalists created shows that women not only use social media more often than men, but they use these sites in more ways. More women also use the top social media sites and they dominate the visual-type social websites, which are the fastest growing social networks today.

Useful Websites Here is a list of websites we have featured in the past that might come in handy. Remember to set FuckingHomepage.com as your start page if you haven’t already. Educational/Learning Registration Check out one of our most popular webinars below! Emerging Tech is a professional learning community (PLC) where school librarians can explore all the ways to integrate technology and 21st century learning into school library programs. The community hosts free monthly webinars and live chats presented by Michelle Luhtala, Head Librarian at New Canaan High School (CT). Online discussions provide an easy way to continue the conversation and share ideas and experiences with peers across the country, and around the world.

s 2014 Hype Cycle for Emerging Technologies Maps the Journey to Digital Business STAMFORD, Conn., August 11, 2014 View All Press Releases 2014 Hype Cycle Special Report Evaluates the Maturity of More Than 2,000 Technologies 2014 Marks 20th Anniversary of the Gartner Hype Cycle The journey to digital business is the key theme of Gartner, Inc.'s "Hype Cycle for Emerging Technologies, 2014." As the Gartner Hype Cycle celebrates its 20th year, Gartner said that as enterprises set out on the journey to becoming digital businesses, identifying and employing the right technologies at the right time will be critical.