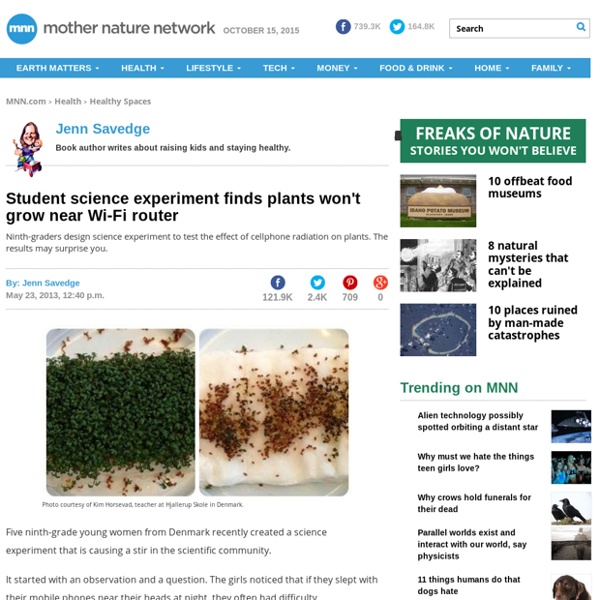 Five ninth-grade young women from Denmark recently created a science experiment that is causing a stir in the scientific community. It started with an observation and a question. The girls noticed that if they slept with their mobile phones near their heads at night, they often had difficulty concentrating at school the next day. They wanted to test the effect of a cellphone's radiation on humans, but their school, Hjallerup School in Denmark, did not have the equipment to handle such an experiment. So the girls designed an experiment that would test the effect of cellphone radiation on a plant instead. The students placed six trays filled with Lepidium sativum, a type of garden cress, into a room without radiation, and six trays of the seeds into another room next to two routers that according to the girls' calculations, emitted about the same type of radiation as an ordinary cellphone. Over the next 12 days, the girls observed, measured, weighed and photographed their results.

There is No Mistaking The Evidence, Cannabis Cures Cancer Cannabis is one of the most powerful healing plants in the world and it makes cancer essentially disappear. Cannabis compounds are responsible for halting the growth factors that are responsible for metastatic growth. Although there has been scientific evidence that marijuana can shrink and even kill tumors since the 1970s, much of the recent public interest in this research has been inspired by Run From The Cure, a documentary about a Canadian man who claims that the concentrated oil from the cannabis plant has cured his skin cancer. He then tries the cure on a number of other cancer victims in his community with similar results. Researchers have now found that the compound, called cannabidiol, has the ability to ‘switch off’ the gene responsible for metastasis in an aggressive form of breast cancer. A team from the California Pacific Medical Center, in San Francisco, first spotted its potential five years ago, after it stopped the proliferation of human breast cancer cells in the lab.

The many uses for Apple Cider Vinegar There are approximately 8 bajillion uses for apple cider vinegar. Although, to be perfectly honest I really hated the stuff for a long time. My first experience with apple cider vinegar (or ACV as the cool kids call it) was during my college days when I was attempting to get rid of a little wart on my toe. I kept gagging at the smell. My how things change. Now I gag on the smell of fake perfumes, toxic cleaners, and baby diapers. What is Apple Cider Vinegar Apple cider vinegar is a type of vinegar made from cider or apple must and has a pale to medium amber color. Most people are familiar with ACV as an ingredient to be used in salad dressings, marinades, vinaigrettes, food preservatives, chutneys, etc. Uses for Apple Cider Vinegar Internal Health Let’s talk internal health, first. To take orally, simply mix 1 – 2 tablespoons of apple cider vinegar into a cup of filtered water (or you could mix it with herbal tea). Of course, you can add ACV into salad dressings. Beauty Home

The Rising Spoon: Monthly Veg-ucation: Baked Organic Zucchini Boats Two Ways Ready for your first summertime veggie post? Last month I discussed cauliflower and the month before was asparagus. This month the ladies in our real food vegetable circle are focusing on summer squash. I could have chosen several different summer squashes, but opted to try a new zucchini recipe after picking up a few pounds of the organic produce at my local farmer's market a few weeks back. After secretly grating it into my boyfriend's scrambled eggs for a few weeks (shhh...he doesn't like squash and still has no idea) and sauteing it in pasta dishes, I couldn't wait to try this cheesy baked and stuffed dish. Over the past year or so, zucchini boats with pepperoni pizza toppings have been super popular all over Pinterest; however, I wanted a filling with a bit more substance. I even went so far as to plan a taco flavored zucchini boat with ground beef seasoned with my homemade spicy taco seasoning, but I ended up not having enough zucchini to try it out. Another bonus?

Giant weed that burns and blinds spreads across Canada A huge, toxic plant that can burn skin and cause permanent blindness has been found for the first time in eastern Ontario, prompting calls for a federal response to contain the spread of the poisonous plant as fear grows no province is immune. A forestry official confirmed two new findings of giant hogweed last week in Renfrew County, west of Ottawa. It has previously been spotted in Newfoundland, New Brunswick, Quebec, southwestern Ontario, Alberta and British Columbia. About 50 plants were spotted in Toronto’s Don Valley two weeks ago. Contact with the weed’s clear, watery sap can be very dangerous, Jeff Muzzi, Renfrew County’s forestry manager and weed inspector. “What it does to you is pretty ugly,” said Mr. Even a tiny trace of sap applied to the eye can singe the cornea, causing temporary or permanent blindness, he added. Most provinces have not authorized official weed inspectors to destroy the poisonous plant because it does not impinge on agriculture. Mr. Mr. National Post

(75) Timeline Photos Bach flower remedies test Use the memo to keep track of all your remedies! Bach flower remedies test The following test is a tool to help you choosing the correct Bach flowers. Obviously it isn’t the only way to choose them, but it is an excellent support to make an initial selection of flower remedies. It is simple and easy to use and it also allows novices to find the main flower remedies that are supposed to be the most useful for them. It is not a psychological test, it doesn’t assess nor judge anything about you, but it helps you choosing the most suitable flowers to you at this time. Practical suggestions for the use of the test Tick the box corresponding to the answerBoxes left blank won’t be consideredAt the end, to examine the test result, press the "review the questionnaire” buttonAt this point, a second window will open and it will show you the flowers you selected through the questionnaireReview the list and read the meaning of each flower, clicking on their name

Tapping Into Abundance First, Be aware of the hidden force shaping your reality. Your living reality is like a computer. See the device you’re viewing this website on? In order to display it to you, the device needs to run thousands of programs, calculations and algorithms in the background. It’s a complex process with a simple end result: a viewable screen. The same goes for your reality. What did your parents and teachers tell you as a child? The conditioning you’ve received determines the nature of your beliefs, and whether they serve or sabotage you. For instance, imagine two co-workers, Jamie and Paul, are asked to relocate to an office in South Africa. Two identical experiences, two very different outcomes. Okay, so back to the computer analogy: if positive beliefs are computer programs, limiting beliefs – and the subconscious fears they create in you – are like computer viruses.

There’s a New Disease Spread by Ticks, and it’s Not Lyme A new tick borne illness that is similar to Lyme disease, with symptoms including fever and muscle pain, are being reported among people in the U.S. for the first time this year. The bacteria, called Borrelia miyamotoi is relatively new and is one of five newly identified diseases spread by deer ticks. The illness doesn’t have a name yet, and a study published in the Annals of Internal Medicine recently described two patients who showed signs of Lyme disease but did not respond to the common antibiotic treatment with doxycycline. Lyme disease is caused by the Borrelia burgdorferi bacterium, and B. miyamotoi may be a distant cousin of that strain. So far, cases of B. miyamotoi are relatively rare, but doctors believe more may start to emerge, especially in areas where Lyme disease is common, such as in the northeastern U.S. “I think we will definitely see more of it because up to now, people haven’t even know about it. (MORE: Bugs Be Gone! So how is the new infection diagnosed?

Bee Venom Can Kill HIV, Study Says Scientists from Washington University School of Medicine in St. Louis have discovered bee venom can kill the HIV virus without harming the body. Bees could hold the key to preventing HIV transmission. Scientists at the Washington University School of Medicine in St. "Our hope is that in places where HIV is running rampant, people could use this as a preventative measure to stop the initial infection," Joshua Hood, one of the authors of the study, said in a statement. The researchers attached melittin to nanoparticles that are physically smaller than HIV, which is smaller than body cells. "Based on this finding, we propose that melittin-loaded nanoparticles are well-suited for use as topical vaginal HIV virucidal agents," they write. Because the toxin attacks the virus' outer layer, the virus is likely unable to develop a resistance to the substance, which could make it more effective than other HIV drugs. The group plans to soon test the gel in clinical trials. Source: US News Related:

Where Does Morality Come From? - One Atheist's Attempt To Answer | The Proud Atheist News Blog On June 13th, an article was published in The Spectator that raised my ire, specifically this bit right here: But if asked where we get our morality from, if not from science or religion, the new atheists start to stammer. They tend to argue that ethics is obvious, which it isn’t, or natural, which it manifestly isn’t either, and end up vaguely hinting that this isn’t their problem. Let someone else worry about it. Really, Jonathan Sacks? I don’t stammer when asked that question. Stop me if you’ve heard this one: “Without God, without the church, without the Bible, what’s to stop you from just doing whatever you want? “That’s not a funny joke. I’m sure all atheists and even agnostics reading this have been hit with this ludicrous whopper before. Although that may be giving the flock a little too much credit. The best and most succinct response I’ve heard to this comes from Penn Jillette, in an interview with Ron Bennington for Sirius XM: “…And my answer is: I do rape all I want. Ugh.