RAILS 101. This course will become read-only in the near future. 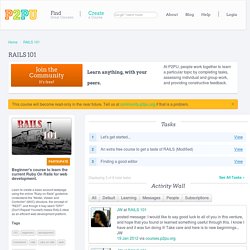 Tell us at community.p2pu.org if that is a problem. posted message: I would like to say good luck to all of you in this venture, and hope that you found or learned something useful through this. I know I have and it was fun doing it! Take care and here is to new beginnings... JW posted message: I've just added a link to a great website explaining about a key word, REST/FUL. Posted message: I've added another link to refer to the basic commands with more examples and detail. posted message: I've added "Things to Remember" in the task panel and "Test Editor for Regular Expressions in Ruby" in the external link panel. Complete Web Developer Bootcamp with Rails - HTML, CSS, JS, &amp; Ruby on Rails. Best way to learn Ruby & Rails (via @AstonJ) RailsApps/rails-composer. Tutorial rails apps composer · RailsApps/rails_apps_composer Wiki. Guide to the Rails Apps Composer Gem by Daniel Kehoe Last updated 29 August 2012. 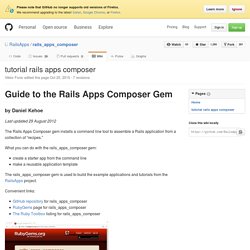 I built Prelang, an automated tool to create Rails apps much, much faster : rails. One Month Rails. The Best Ruby and Ruby on Rails Courses Online. If you’re a self-taught Ruby on Rails developer, or an aspiring one, chances are you’ve used at least a few premium tutorials at one point or another. 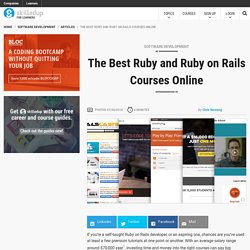 With an average salary range around $70,000 year, investing time and money into the right courses can pay big dividends down the road. Individuals using such services typically fall into a few different camps: Those just starting off and looking to learn the basicsExperienced programmers looking to pick up a new languageExperienced Rubyists looking to advance their skills Fortunately, there’s currently no shortage of content out there that caters to each of those demographics. Distinguishing which of those courses is most appropriate for your particular skill level and goals is key because many novice programmers can become overwhelmed with an advanced course. Codeschool For a long time, Codeschool has been one of the leading providers of paid tutorials in Ruby as well as many other programming languages.

Setting up Sublime Text 3 for Rails Development. These recommendations are for Sublime Text 3, which is currently in beta, but stable. 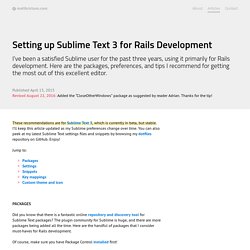 I’ll keep this article updated as my Sublime preferences change over time. You can also peek at my latest Sublime Text settings files and snippets by browsing my dotfiles repository on GitHub. Enjoy! How do I install sqlite3 for Ruby on Windows? Getting Started with Rails. 1 Guide Assumptions This guide is designed for beginners who want to get started with a Rails application from scratch. 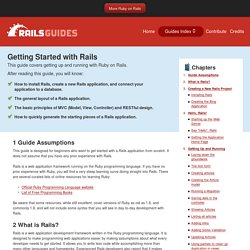 It does not assume that you have any prior experience with Rails. However, to get the most out of it, you need to have some prerequisites installed: The Ruby language version 1.9.3 or newer.The RubyGems packaging system, which is installed with Ruby versions 1.9 and later. To learn more about RubyGems, please read the RubyGems Guides.A working installation of the SQLite3 Database. Learn Ruby on Rails with the Best Free Online Tutorial. One Month Rails Review: A Crash Course in Ruby on Rails Development.

With demand for experienced Ruby on Rails developers surging, and salaries ranging from $80-150k/year, it’s no wonder people are lining up to learn Ruby. 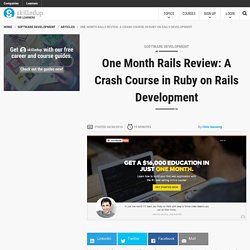 Finding a good starting point can be a daunting task, however, with the litany of online resources available. Responding to a crowded marketplace, One Month Rails helps to cut through noise and provide a clear and concise crash course that will get you up and running with a live app in a matter of days. The course is made up of a series instructional screencasts led by One Month co-founder, Mattan Griffel, and is one of the best online Rails courses currently on the market. Mattan’s simplistic style, easy to follow lessons, and down to earth language make this the perfect beginners Rails course for aspiring developers with little to no programming experience.

One Month Rails instruction is lead by co-founder Mattan Griffel. Overview The backstory on One Month Rails is nearly as interesting as the course itself. Who It’s For How it Works. One Month Rails. Ruby on Rails - Cheatsheet. Rails Beginner Cheat Sheet. Bold words are what is really important e.g. the command and concept shown in the usage category. 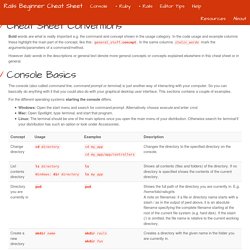 In the code usage and example columns these highlight the main part of the concept, like this: general_stuff.concept. In the same columns italic_words mark the arguments/parameters of a command/method. However italic words in the descriptions or general text denote more general concepts or concepts explained elsewhere in this cheat sheet or in general. The console (also called command line, command prompt or terminal) is just another way of interacting with your computer. So you can basically do anything with it that you could also do with your graphical desktop user interface. For the different operating systems starting the console differs. Windows: Open the start menu and search for command prompt. Learn Ruby on Rails with this Step-by-step Guide. What must I do to deserve the $60,000 salary of a Junior Ruby on Rails Developer and earn the privilege of working 100% remotely from home?

10 Reasons Beginners Should Learn Ruby on Rails. Posted by Mattan Griffel I often get asked the question: “What programming language should I learn?” 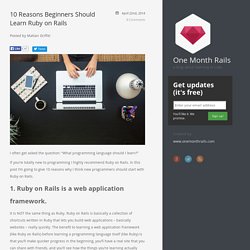 If you’re totally new to programming I highly recommend Ruby on Rails. In this post I’m going to give 10 reasons why I think new programmers should start with Ruby on Rails. It is NOT the same thing as Ruby. Ruby on Rails is basically a collection of shortcuts written in Ruby that lets you build web applications – basically websites – really quickly. Basecamp, Airbnb, Bleacher Report, Fab.com, Scribd, Groupon, Gumroad, Hulu, Kickstarter, Pitchfork, Sendgrid, Soundcloud, Square, Yammer, Crunchbase, Slideshare, Funny or Die, Zendesk, Github, Shopify. It’s not the most in-demand thing to learn for jobs in general – there are way more job openings out there for things like Java, PHP, even Python – but in terms of working at a startup, great Ruby on Rails developers are some of hardest people to find. 10 reasons why you should learn Ruby on Rails. Ruby on Rails has been out now for a number of years, but lately its popularity has gone up quite a bit. 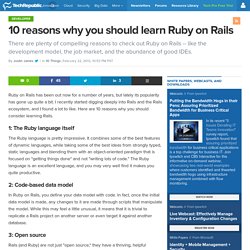 I recently started digging deeply into Rails and the Rails ecosystem, and I found a lot to like. Here are 10 reasons why you should consider learning Rails. 1: The Ruby language itself The Ruby language is pretty impressive. It combines some of the best features of dynamic languages, while taking some of the best ideas from strongly typed, static languages and blending them with an object-oriented paradigm that is focused on "getting things done" and not "writing lots of code. " 2: Code-based data model. How to Learn Rails and Change Your Life: Two Ruby on Rails Developers Share Their Secrets. Sites You Love Built With Rails. You’ve heard of Ruby, and maybe even Rails. 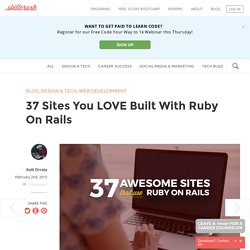 But did you know that some of your favorite sites are built on that framework? You’ll find music, sports, jobs, crowdsourcing, education, and fun and games (literally!) Among these sites. They let you do everything from shopping and traveling to working, staying fit, and being entertained. And what they all have in common is that they were created using Ruby on Rails, an amazing – and super popular! Even better news? So, check out these 37 sites that you love that use the very elegant and very in-demand Rails… and get ready for a career you love with Rails!

RailsApps · Build and Learn · Examples and Tutorials. How I Learned Enough Ruby On Rails In 12 Weeks To Launch Freelancify. (Update February 26, 2013: I have since this post sold Freelancify.com to a new owner) Before I begin, I’d like to recognize Josh Crews ( for convincing me to learn Ruby on Rails; without him and his hours of volunteered mentership and help, I wouldn’t be writing this today.

Thank you. I’d also like to address Please do not email me asking me to program your app for equity. 13 Reasons You Should Learn Ruby on Rails. This week, we launched the brand new Ruby on Rails Blueprint. ::applause!! :: The Skillcrush team is SO excited about this new blueprint, because once you learn Rails, you can build basically ANYTHING for the web. …or so I’ve heard. Here at Skillcrush (and across the Internet!) What is Rails? Sounds fancy.

I had a TON of questions, and after asking around, I realized I wasn’t the only one. 10 Reasons Beginners Should Learn Ruby on Rails. If you're new to programming, what language should you learn first? I often get asked the question: “What programming language should I learn?” If you’re totally new to programming I highly recommend Ruby on Rails. In this post I’m going to give 10 reasons why I think new programmers should start with Ruby on Rails. 1. Why Use Ruby on Rails? My Experience as a Veteran Programmer. Sometimes I hear people complaining about their clients, saying that they insist on using Rails, that they’ve had too much Kool Aid. If they’re recruiters, they almost feel sick in the stomach about having to find yet another Ruby on Rails ‘primadona’ developer. Then they pull out something similar to this amazingly ignorant comparison between Git and PHP to prove their point.

“They don’t even know what they’re asking for,” they say. For us as programmers, sometimes it does indeed seem like our clients don’t have a clue. Ruby on Rails Guides. Learning Rails in One Month. I think just about anyone can learn to code in one month. Last August, I taught myself Ruby on Rails and was able to build my own application in under one month. Then I went on to win a hackathon on my own against 300 other experienced programmers. I didn’t have any formal computer science background or programming experience. Ruby on Rails. Learn Ruby: 29 of The Best Online Educational Resources to Learn to Ruby and Ruby on Rails. Dive into Ruby and Ruby On Rails with Code School's Zombie and 80's arcade themed courses. Each course comes with video and slide, complete with a detailed breakdown of Ruby and Rails, interactive challenges, and a song.

Five reasons smart startups use Rails. It's 2010. You want to build an web application. PHP is dead. Businessinsider. 20 Reasons Why Every Web Designer Needs to Learn Ruby on Rails. She told me her husband was being downsized. He was 52 years old, been with the company for twenty. He was a COBOL man. Nothing but a COBOL man his entire career. But the company needed more than a COBOL man. So they let him go. That is a true story. In fact, you probably know somebody that’s been let go or overlooked because of a lack in a certain skill set. Today that can happen at 30.