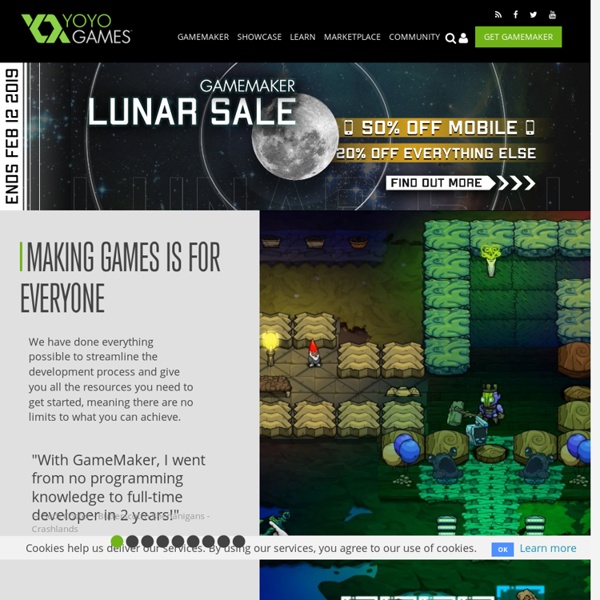 Quest - Make text adventure games without programming Quest lets you make interactive story games. Text adventure games like Zork and The Hitchhiker's Guide to the Galaxy. Gamebooks like the Choose Your Own Adventure and Fighting Fantasy books. You don't need to know how to program. All you need is a story to tell. Your game can be played anywhere. Watch a quick screencast ...and you're free No restrictions. This means you can download and modify the Quest source code, and do whatever you want with it. You can sell the games you make with Quest. You don't need to ask for permission - you already have it. Get started quickly You don't need to know how to program to use Quest. Everything about your game is displayed in plain English, but the source code to your game is also viewable and editable for the more technically minded. A full tutorial is included, and help is always available on our forums. Ever wanted to... Ever wanted to create your own game, but were put off by complicated programming languages? Surprisingly powerful Any language

Create floor plans, house plans and home plans online with Floorplanner.com Gliffy API Lets You Get Diagrams and Flowcharts via Code Gliffy, the fully browser-based diagramming and flowchart tool, today announced the public availability of their new API (technical details at our Gliffy API Profile). The four year old company announced the new API on its blog, noting that Gliffy hopes to take advantage of the growing trend of companies that are unlocking their APIs to extend the reach of their applications and data. The RESTful API allows developers to integrate Gliffy’s flowchart and diagram capabilities into a variety of mashups and applications. Currently there are client libraries available for PHP and Java, and the API also supports OAuth authentication. Gliffy notes that developers have already produced two new applications based on the Gliffy API: a Wordpress plugin that integrates Gliffy diagrams into blog posts and a backup tool that enables users to create local backup copies of their Gliffy diagrams. Documentation for the Gliffy API is available on the developer portal, including request parameters.

Jay is Games - Indie Games, Browser Games and Casual Game reviews, walkthroughs, room escape games, point and click games, puzzle games and more! Comic Life Comic Life 3 is now available for both Mac and Windows! “4 Stars and Editors Choice.” MacUser Dec. 2013 "Awesome!... "Outstanding." Ever wanted to be a character in a comic book? It's the app with everything you need to make a stunning photo comic.Fonts, templates, panels, balloons, captions and lettering art. Comic Life is also great for doing school projects, how to guides, flyers for your business or group, storyboarding, lesson plans, book reports, Internet memes; and that's just to name a few! Creating an original work is easy with the script editor. Photo filter effects and all our lettering options really make your photos come alive. When you're done you can share your masterpiece with your fans in a variety ways. Make it your story. Script Editor Get your words straight before starting your layout.

Converting your Ascii art to PNGs If you use org mode, in the contrib/scripts folder of the package you'd find a jar file called ditaa.jar. This is a small piece of software which requires Java (drat!) but nevertheless a neat one. For those of you who know Artist-mode in Emacs, this would be a god send. First I drew this ascii text of 2 rectangles by invoking M-x artist-mode and drawing them using the rectangle option. I saved the text file and called the program thus $ java -jar ditaa.jar ../.. DiTAA version 0.6b, Copyright (C) 2004 Efstathios Sideris Using options:Reading file: ../.. I did that in my cygwin emulation shell in Windows, so it should not be too different in Unix OSes or the DOS prompt. The homepage of the package is ditaa and it has a good intro on how to use the software.