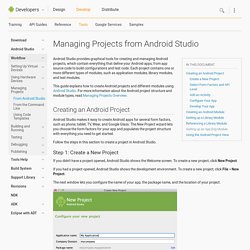 Each project contains one or more different types of modules, such as application modules, library modules, and test modules. This guide explains how to create Android projects and different modules using Android Studio. For more information about the Android project structure and module types, read Managing Projects Overview.

Random Toasts With your newfound knowledge of random numbers and Toast messages, add another random number generator that will occasionally show a bonus Toast fact about yourself. 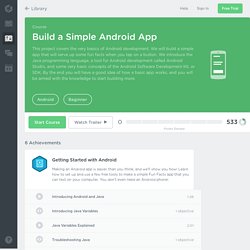 Applications that receive consistent traffic, experience regular traffic fluctuations, or meet the parameters for scaling up and down gradually. Como App Builder – Create a Mobile App in 3 Easy Steps. How to create your first Android app. This article will be the beginning of an AndroidPIT Android Development series.Knowing a programming language already will be very helpful to follow up with the tutorial but it’s not required. 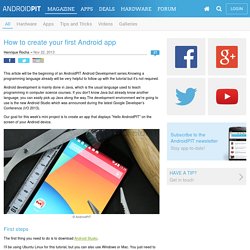 Android development is mainly done in Java, which is the usual language used to teach programming in computer science courses. If you don't know Java but already know another language, you can easily pick up Java along the way.The development environment we're going to use is the new Android Studio which was announced during the latest Google Developer’s Conference (I/O 2013). Make Your First Android App: Part 1/3. If you're new here, you may want to subscribe to my RSS feed or follow me on Twitter. 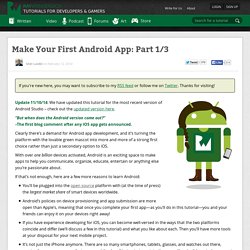 Thanks for visiting! Update 11/10/14: We have updated this tutorial for the most recent version of Android Studio – check out the updated version here. “But when does the Android version come out?” –The first blog comment after any iOS app gets announced. Clearly there’s a demand for Android app development, and it’s turning the platform with the lovable green mascot into more and more of a strong first choice rather than just a secondary option to iOS.

With over one billion devices activated, Android is an exciting space to make apps to help you communicate, organize, educate, entertain or anything else you’re passionate about. 10 Excellent Platforms for Building Mobile Apps. If you've ever wanted to build an app for your business, blog, product or service, but the heavy investment of both time and money put you off, you're not alone. 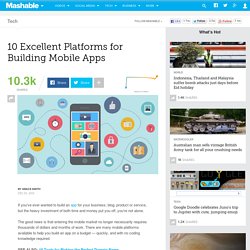 The good news is that entering the mobile market no longer necessarily requires thousands of dollars and months of work. There are many mobile platforms available to help you build an app on a budget — quickly, and with no coding knowledge required. With a small investment, you can create and manage your mobile site or application using one of the platforms listed below, and start reaping the advantages of offering your customers a dedicated mobile experience, including increased awareness, engagement and revenue. Show As Gallery. How to make an app. How to create your first Android app. Here, crazy things make sense!