Police brutality under spotlight 20 years after democracy :Monday 3 February 2014. Despite legislative change and a new Constitution, torture and brutal assaults by police and prison officials continue unabated with little consequence for perpetrators. 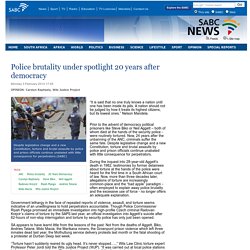 (SABC) “It is said that no one truly knows a nation until one has been inside its jails. A nation should not be judged by how it treats its highest citizens, but its lowest ones.” Nelson Mandela. Prior to the advent of democracy political prisoners like Steve Biko or Neil Aggett – both of whom died at the hands of the security police - were routinely tortured. During the inquest into 28-year-old Aggett’s death in 1982, testimonies by former detainees about torture at the hands of the police were heard for the first time in a South African court of law. Government lethargy in the face of repeated reports of violence, assault, and torture seems indicative of an unwillingness to hold perpetrators accountable. “Torture hasn’t suddenly reared its ugly head. "I handle cases like this on an on-going basis. Police on standby in Mothotlung:Saturday 13 June 2015. Police maintain law and order in Mothotlung near Brits. 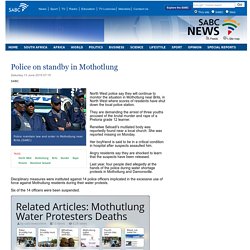 (SABC) North West police say they will continue to monitor the situation in Mothotlung near Brits, in North West where scores of residents have shut down the local police station. They are demanding the arrest of three youths accused of the brutal murder and rape of a Pretoria grade 12 learner. Reneilwe Seloadi's mutilated body was reportedly found near a local church. She was reported missing on Monday. Her boyfriend is said to be in a critical condition in hospital after suspects assaulted him. Angry residents say they are shocked to learn that the suspects have been released. SAPS denies being slow to react to police brutality:Friday 4 July 2014. Police tied Mido Macia to the back of a van and dragged him through the streets of Daveyton. 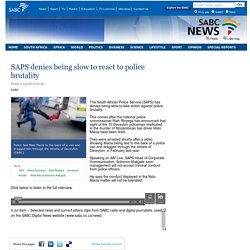 (SABC) The South African Police Service (SAPS) has denied being slow to take action against police brutality. This comes after the national police commissioner Riah Phiyega has announced that eight of the 10 Daveyton policemen implicated in the murder of Mozambican taxi driver Mido Macia have been fired. Police brutality back in the spotlight:Wednesday 3 December 2014.

A video of the incident has been uploaded on the internet. 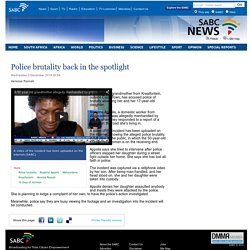 (SABC) A 50-year old grandmother from Kraaifontein, outside Cape Town, has accused police of brutally attacking her and her 17-year-old daughter. Rosaline Appolis, a domestic worker from Wallacedene, was allegedly manhandled by police, when they responded to a report of a quarrel in the road she's living in. A video of the incident has been uploaded on the internet, showing the alleged police brutality, in full view of the public, in which the 50-year-old Kraaifontein woman is on the receiving end.

Appolis says she tried to intervene after police officers slapped her daughter during a street fight outside her home. Protesting Soweto residents claim police brutality:Wednesday 6 May 2015. Soweto residents say police have beat up some of them during a protest against Eskom’s prepaid electricity meters. 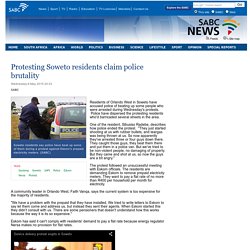 (SABC) Residents of Orlando West in Soweto have accused police of beating up some people who were arrested during Wednesday's protests. Police have dispersed the protesting residents who'd barricaded several streets in the area. One of the resident, Sibusiso Radebe, describes how police ended the protest. "They just started shooting at us with rubber bullets, and teargas was being thrown at us.

The protest followed an unsuccessful meeting with Eskom officials. A community leader in Orlando West, Faith Vanqa, says the current system is too expensive for the majority of residents. "We have a problem with the prepaid that they have installed. Eskom has said it can't comply with residents' demand to pay a flat rate because energy regulator Nersa makes no provision for flat rates. Another video showing police brutality surfaces:Monday 3 August 2015.

Tonic Mzangwa is seen in the video crying out for help, his hands cuffed to the back of a police van. 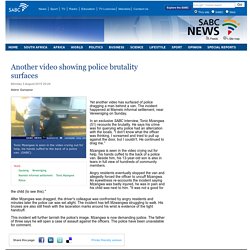 (SABC) Yet another video has surfaced of police dragging a man behind a van. The incident happened at Mamelo informal settlement, near Vereeniging on Sunday. In an exclusive SABC interview, Tonic Mzangwa (51) recounts the brutality. He says his crime was for querying why police had an altercation with the locals. North West police under fire over alleged police brutality:Wednesday 20 May 2015. Some taxi operators claim they were attacked by police. 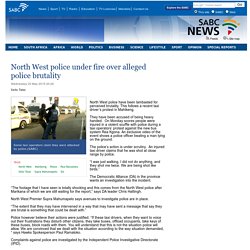 (SABC) North West police have been lambasted for perceived brutality. This follows a recent taxi driver’s protest in Mahikeng. They have been accused of being heavy handed. On Monday scores people were injured in a violent scuffle with police during a taxi operators’ protest against the new bus system Rea Kgona. The police’s action is under scrutiny.

“I was just walking, I did not do anything, and they shot me twice. The Democratic Alliance (DA) in the province wants an investigation into the incident. “The footage that I have seen is totally shocking and this comes from the North West police after Marikana of which we are still waiting for the report,” says DA leader Chris Hattingh. IPID probe KZN police brutality allegations :Thursday 8 January 2015. Police have opened an inquest docket and the IPID has confirmed that it is investigating the incident. 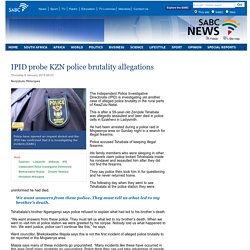 (SABC) The Independent Police Investigative Directorate (IPID) is investigating yet another case of alleged police brutality in the rural parts of KwaZulu-Natal. This is after a 59-year-old Zenzele Tshabala was allegedly assaulted and later died in police cells in Ezakheni in Ladysmith. Police brutality under spotlight in N Cape:Wednesday 20 November 2013. Deputy Minister of Police, Maggie Sotyu, has also reassured foreign shop owners of government's protection. 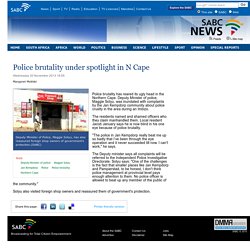 (SABC) Police brutality has reared its ugly head in the Northern Cape. Deputy Minister of police, Maggie Sotyu, was inundated with complaints by the Jan Kempdorp community about police cruelty in the area during an Imbizo. The residents named and shamed officers who they claim manhandled them. Local resident Jacob January says he is now blind in his one eye because of police brutality. "The police in Jan Kempdorp really beat me up so badly that I’ve been through the eye operation and it never succeeded till now. Cape Town police brutality widely condemned:Saturday 8 March 2014. Cellphone footage shows the man being stripped and officers punching and kicking him in his groin. 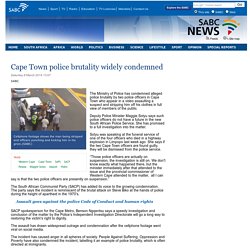