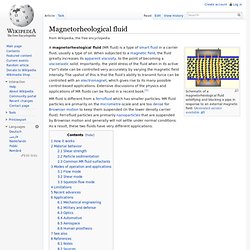 (Animated version available.) A magnetorheological fluid (MR fluid) is a type of smart fluid in a carrier fluid, usually a type of oil. When subjected to a magnetic field, the fluid greatly increases its apparent viscosity, to the point of becoming a viscoelastic solid. Importantly, the yield stress of the fluid when in its active ("on") state can be controlled very accurately by varying the magnetic field intensity. The upshot of this is that the fluid's ability to transmit force can be controlled with an electromagnet, which gives rise to its many possible control-based applications. MR fluid is different from a ferrofluid which has smaller particles. How it works[edit] When a magnetic field is applied, however, the microscopic particles (usually in the 0.1–10 µm range) align themselves along the lines of magnetic flux, see below. 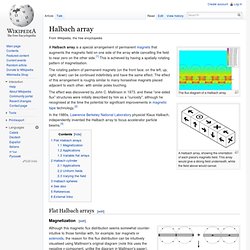 This array would give a strong field underneath, while the field above would cancel. A Halbach array is a special arrangement of permanent magnets that augments the magnetic field on one side of the array while cancelling the field to near zero on the other side.[1] This is achieved by having a spatially rotating pattern of magnetisation. The rotating pattern of permanent magnets (on the front face; on the left, up, right, down) can be continued indefinitely and have the same effect. The effect of this arrangement is roughly similar to many horseshoe magnets placed adjacent to each other, with similar poles touching. The effect was discovered by John C. In the 1980s, Lawrence Berkeley National Laboratory physicist Klaus Halbach, independently invented the Halbach array to focus accelerator particle beams.[3] Flat Halbach arrays[edit] Magnetization[edit] Where: Boundary Layer (Tesla) Turbine Page. 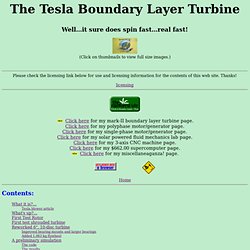 (Click on thumbnails to view full size images.) Please check the licensing link below for use and licensing information for the contents of this web site. Thanks! Licensing Click here for my mark-II boundary layer turbine page. Click here for my miscellaneaganza! Home Contents: What it is?... What it is?... Tesla Turbine Disks Unit by cousindave76 on Shapeways. Tesla Turbine Pump (from Internet Glossary of Pumps)

On October 21st, 1909, Nikola Tesla (an inventor of many ingenious items) filed a patent for a pump which uses smooth rotating disks inside a volute casing. 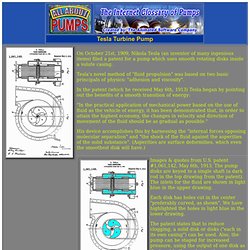 Tesla's novel method of "fluid propulsion" was based on two basic principals of physics: "adhesion and viscosity". In the patent (which he received May 6th, 1913) Tesla began by pointing out the benefits of a smooth transition of energy: "In the practical application of mechanical power based on the use of fluid as the vehicle of energy, it has been demonstrated that, in order to attain the highest economy, the changes in velocity and direction of movement of the fluid should be as gradual as possible. " His device accomplishes this by harnessing the "internal forces opposing molecular separation" and "the shock of the fluid against the asperities of the solid substance". 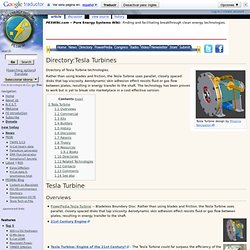 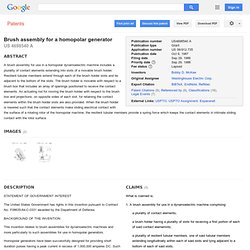 F08635-84-C-0331 awarded by the Department of Defense. This invention relates to brush assemblies for dynamoelectric machines and more particularly to such assemblies for use in homopolar generators. Homopolar generators have been successfully designed for providing short duration pulses having a peak current in excess of 1,000,000 amperes DC. Such generators generally include a cylindrical rotor of either a drum or disk configuration, mounted on a frame and rotated about a central axis. A field coil encircling the rotor and connected to an external current supply provides and applied magnetic field excitation passing through the rotor.

Drum type homopolar dynamoelectric machines include a stationary excitation system and a rotating drum composed of a combination of ferromagnetic and highly conductive materials such that a direct current output voltage is produced along the axial length of the drum. Patent US6856062 - Homopolar machine with shaft axial thrust compensation for reduced thrust ... - Google Patents. This application is a Continuation-in-Part (CIP) of U.S. application Ser. 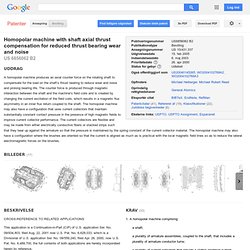