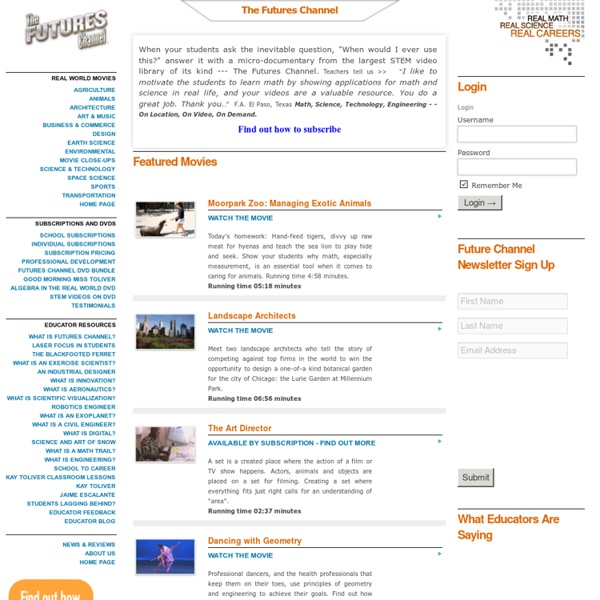 When your students ask the inevitable question, "When would I ever use this?" answer it with a micro-documentary from the largest STEM video library of its kind --- The Futures Channel. Teachers tell us >> “I like to motivate the students to learn math by showing applications for math and science in real life, and your videos are a valuable resource. You do a great job. Thank you..” F.A.

Hospitality jobs go unfilled around the country as COVID-19 backpacker exodus starts to bite - ABC News If you're heading out to a restaurant this weekend or even spending a few hours at the pub, you may notice something missing from the pre-pandemic era — foreign workers. Key points: Restaurants that laid off workers are now struggling to find staffIt comes despite a national unemployment rate of 6.9 per cent in SeptemberFood writer Dani Valent says March will be a "crunch time" for the industry As the hospitality industry tries to rebound from COVID-19 — no more so than in Victoria, where restaurants were closed for months — venues around the country are facing a staff shortage crisis. ARKive - Discover the world's most endangered species Wildscreen's Arkive project was launched in 2003 and grew to become the world's biggest encyclopaedia of life on Earth. With the help of over 7,000 of the world’s best wildlife filmmakers and photographers, conservationists and scientists, Arkive.org featured multi-media fact-files for more than 16,000 endangered species. Freely accessible to everyone, over half a million people every month, from over 200 countries, used Arkive to learn and discover the wonders of the natural world.

Secondary Maths resources collections Skip to main content Jobs TES the largest network of teachers in the world My TES Secondary Maths resources collections Resources | Published 4 April, 2011 Thinkfinity Browse Resources Verizon Foundation proudly partners with some of the country’s top educational organizations to provide you with the latest topics, tools and trends in education. Created by the John F. Kennedy Center for the Performing Arts, ARTSEDGE provides resources and examples for teachers to teach in, through and about the arts. Dynamically Created Addition Worksheets Dynamically Created Addition Worksheets Here is a graphic preview for all of the addition worksheets. These dynamically created addition worksheets allow you to select different variables to customize for your needs.

New platforms are making the artist-fan connection more intimate — and more lucrative - ABC News Recently, the Melbourne singer-songwriter Didirri Peters was asked to play for an audience of one. The musician, who plays under his first name, received the request via a platform called Serenade, which lets fans order a personalised video performance of a song direct from the artist. "It was, 'Hi Didirri, my friend is quite sick and one your songs is his favourite song, would you please perform it for them'," Didirri told the ABC. And so he did, from his bedroom, where he uses a piano and a guitar, a $17 LED strip from Bunnings and bedsheet to soften the light. (He has cellophane, too, if the occasion calls for it.) Must Watch Documentaries About The U.S. Real Scientific Evidence of Controlled Implosion "The preconceived notion of NIST is that there's no evidence for explosives, as in there is no point in looking. That is the most unscientific thing which you can possibly think of. Not to look because you don't expect to find evidence and in fact the evidence is overwhelming. They state these conclusions for which there is no evidence and then they ignore conclusions that can be drawn from the evidence."

Mathematics Skoool.co.uk A fantastic free resource to support maths and science at Key Stages 3 and 4. There are wonderful interactive activities and study notes. Pupils can download the resources for offline use. Interactive Whiteboard Teacher Tools ↓ Skip to Main Content Home Resources Teacher Tools Numbers to Ten on the TenFrame Using a two by five array, the TenFrame supports the use of five as an anchor for early number sense. View Teacher Tool View Teacher Tool in Spanish Download Sample Lesson Plan