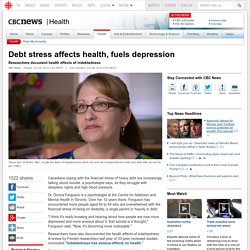 Dr. Donna Ferguson is a psychologist at the Centre for Addiction and Mental Health in Toronto. Over her 12 years there, Ferguson has encountered more people aged 40 to 64 who are overwhelmed with the financial stress of being on disability, a single parent or heavily in debt. "I think it's really knowing and hearing about how people are now more depressed and more anxious about it, that suicide is a thought," Ferguson said. "Now, it's becoming more noticeable. " Researchers have also documented the health effects of indebtedness. "Individuals with unmet loan payments had suicidal ideation and suffered from depression more often than those without such financial problems. " "I would cry," Zerr said. Zerr said stress caused her to eat more and put on weight, while her husband wouldn't eat and lost weight. Precarious jobs holding back young workers, OECD finds.

New studies from the OECD and the United Way of Toronto are exposing how precarious work is hurting economies and blocking opportunity for an entire generation of young people. 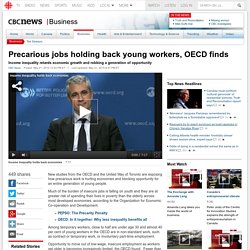 Much of the burden of insecure jobs is falling on youth and they are at greater risk of spending their lives in poverty than the elderly across most developed economies, according to the Organization for Economic Co-operation and Development. Among temporary workers, close to half are under age 30 and almost 40 per cent of young workers in the OECD are in non-standard work, such as contract or temporary work, or involuntary part-time employment. Opportunity to move out of low-wage, insecure employment as workers get older is becoming increasingly limited, the OECD found. Secure jobs in short supply in Canada's new tough labour market.

At 40, the self-employed worker we'll call Natalie is one of a growing number of Canadians shut out of the world of stable, full-time work. 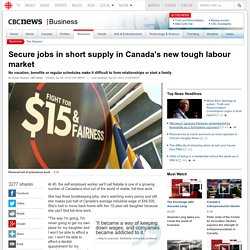 She has three bookkeeping jobs, she's watching every penny and still she makes just half of Canada's average industrial wage of $49,500. She's had to move back home with her 10-year-old daughter because she can't find full-time work. 'It became a way of keeping down wages, and companies became addicted to it.'—Wayne Lewchuk, McMaster University professor "The way I'm going, I'm never going to get my own place for my daughter and I won't be able to afford a car; I won't be able to afford a dentist appointment for my daughter, or something she may need, braces," she told CBC News. 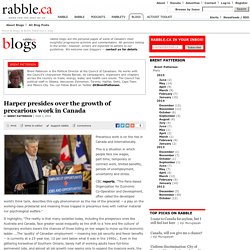 This is a situation in which people face low wages, part-time, temporary or contract work, limited benefits, periods of unemployment, uncertainty and stress. CBC reports, "The Paris-based Organization for Economic Co-Operation and Development, often called the developed world's think tank, describes this ugly phenomenon as the rise of the precariat -- a play on the working-class proletariat and meaning those trapped in precarious lives with neither material nor psychological welfare. " In fact, a recent study released by McMaster University in Hamilton and United Way Toronto found that 44 per cent of working adults in the Greater Toronto and Hamilton Area (GTHA) are in jobs with some level of precariaty. Global News says, "The results of the survey also found that people in precarious jobs earn 51 per cent less than those in stable, secure work, and live in households with 38 per cent lower-income.

Photo: pmwebphotos/flickr. Welcome to Forbes. Freelance trend works well for some, but comes with pitfalls. When Lise Cartwright grew tired of a string of full-time office jobs, she turned to the Internet to see if there were any writing gigs she could try on the side. 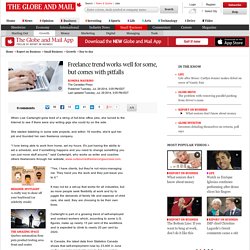 She started dabbling in some side projects, and within 18 months, she’d quit her job and founded her own freelance company. “I love being able to work from home, set my hours. It’s just having the ability to set a schedule, and if something happens and you need to change something you can just move stuff around,” said Cartwright, who works as writer and coaches others freelancers through her website, www.outsourcedfreelancingsuccess.com. Rise of the 'precariat,' the global scourge of precarious jobs. With relatively little notice, the world passed a modern milestone recently, one that makes any yearning for more stable times seem very farfetched — the global jobless total passed 200 million. 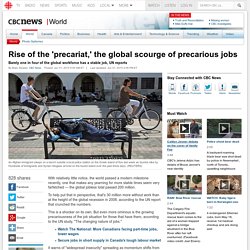 To help put that in perspective, that's 30 million more without work than at the height of the global recession in 2008, according to the UN report that crunched the numbers. This is a shocker on its own. But even more ominous is the growing precariousness of the job situation for those that have them, according to the UN study, "The changing nature of jobs. " New types of casualisation still put workers at a disadvantage. Casual work is nothing new, but as employers seek greater flexibility to meet their labour needs, it is taking new forms. 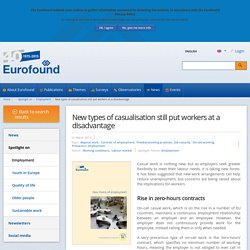 It has been suggested that new work arrangements can help reduce unemployment, but concerns are being raised about the implications for workers. Rise in zero-hours contracts On-call casual work, which is on the rise in a number of EU countries, maintains a continuous employment relationship between an employer and an employee. However, the employer does not continuously provide work for the employee, instead calling them in only when needed.

Bis-13-1275-zero-hours-employment-contracts-FINAL.pdf. The 15-hour workweek: Canada’s part-time problem. For years, Eileen Hasselhoff enjoyed her steady job as a cashier at a Toronto fast-food restaurant. 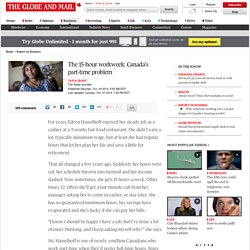 She didn’t earn a lot, typically minimum wage, but at least she had regular hours that let her plan her life and save a little for retirement. That all changed a few years ago. Suddenly her hours were cut, her schedule thrown into turmoil and her income slashed. Now sometimes, she gets 15 hours a week. Other times, 12. “I know I should be happy I have a job. Ms. Wcms_368626. Three quarters of workers don't have stable employment, says UN arm ILO. More than three-quarters of the world's workforce have insecure, part-time, temporary or otherwise unstable jobs, according to the International Labour Organization (ILO), and the UN agency notes that's hurting the global economy. 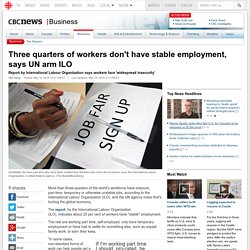 The report, by the International Labour Organization (ILO), indicates about 25 per cent of workers have "stable" employment. The rest are working part time, self-employed, only have temporary employment or have had to settle for something else, such as unpaid family work, to earn their keep. The 15-hour workweek: Canada’s part-time problem. Zero-hours contracts in the UK. This post was contributed by Poppy Pritchard. 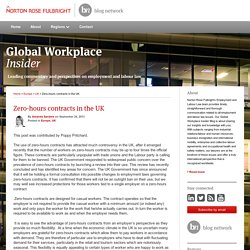 This review has recently concluded and has identified key areas for concern. The UK Government has since announced that it will be holding a formal consultation into possible changes to employment laws governing zero-hours contracts. Is It Time to Put a Stop to 'Zero Hours' Contracts?  A government report showing a big rise in the number of companies hiring staff on 'zero-hours' contracts has sparked fresh debate. Many speaking out in the media have drawn a parallel with the Victorian era when worker rights were virtually non-existent, leaving many living a life in limbo, neither in work nor out of work. Unquestionably these contracts carry a lot of uncertainty for those that 'choose' to accept their terms, but, are they all really good for nothing? According to the 2011 Workplace Employment Relations Study, the number of organisations using these non-committal contracts has risen to a record high - jumping from 55,000 people in 2005 to 200,000 between October and December last year.

Big rise in firms hiring staff on zero-hours contracts. Almost a quarter of Britain's major employers now recruit staff on zero-hours contracts that keep workers on standby and deny them regular hours. According to government estimates, 23% of employers with more than 100 staff have adopted the flexible contract terms for at least some staff following a surge in the number of public sector services contracted out to private providers.

Labour MPs and unions have branded the contracts as a throwback to the Victorian era and say they are being used by employers trying to avoid agency-worker regulations, which entitle agency staff to the same basic terms and conditions as permanent employees after 12 weeks. Petition Ban Zero-Hour Contracts in Canada Now! Bis-13-1275-zero-hours-employment-contracts-FINAL.pdf. Zero-hours jobs stink – whatever you call them. Great news: everyone can stop worrying about nasty, unfair zero-hours contracts because Iain Duncan Smith has rebranded them and made them sound nice. The Conservative work and pensions secretary thinks that the phrase “zero-hours contracts” is too negative, and wants to replace it with “flexible hours”.

Did you see what he did there? It’s even better than Esther McVey’s “enabling hours”. Some have suggested that this is the Tories’ “Marie Antoinette moment”, with lots of blather about lack of employee rights. (Shadow business secretary Chuka Umunna has accused Duncan Smith of “trying to dress up insecurity as flexibility”.) This could herald a bright new world of calling bad, unfair stuff by fun, upbeat names to make everything seem OK. Zero-hours contracts are a tyranny that must end now. Barbara Ellen (“Zero-hours jobs stink – whatever you call them”, Comment) powerfully exposes the tyranny of zero-hours contracts, highlighting the Orwellian descriptions now favoured by Iain Duncan Smith and Esther McVey. The Tory promise to outlaw the use of exclusive zero-hours contracts is welcome but fails to remove the pay and job insecurity that characterise their use. Labour displays a more robust approach by proposing that anyone working “regular hours for more than 12 weeks will have a right to a regular contract”.

As such, the possibility is still left open to an employer to sack someone at the 11th week of a contract. Labour also unequivocally state that they will “ban exploitative zero-hours contracts”. Emphatically right. Michael Somerton Hull Who is doing the flexing and who is being flexed? Unsteady Incomes Keep Millions Behind on Bills. Continue reading the main story Video ALEXANDRIA, Ky. — The bills arrive as regularly as a heartbeat at the Vories’s cozy bi-level brick house just across the Ohio River from Cincinnati.

It’s the paychecks that are irregular. These days, Alex Vories, 37, is delivering pizzas for LaRosa’s, though he has to use his parents’ car since he wrecked his own 1997 Nissan van on a rainy day last month. In the spring and autumn, he had managed to snag several weeks of seasonal work with the Internal Revenue Service, sorting tax returns for $14 an hour. But otherwise the family had to make do with the $350 a week his wife, Erica, brought home from her job as a mail clerk for the I.R.S. “We just kind of wing it every month,” said Mr. Continue reading the main story Slide Show “Get all the bills paid,” he said, “then see where we’re at.” The data show “a clear upward trend in income volatility,” according to a report from U.S.

“They work hard,” Ms. They reluctantly cashed in Mr. Mr. ‘Wild West’ scheduling holds millions of Ontario workers hostage. Zoom Toronto mother Samantha Henry wishes she could give her three young kids the simple things: a promise to watch her son’s volleyball game, to be home for dinner, to be there for bedtime. Bloomsbury Collections - The Precariat - The New Dangerous Class.