Collection Section 7 Commentary - Work & Employment. The Future of Employment: How susceptible are jobs to computerisation? Will Robots Take My Job? Rise of the Robots: Technology and the Threat of a Jobless Future by Martin Ford. In the developing world, two-thirds of jobs could be lost to robots. Healthcare AI: the new medical horizons opened. According to Market and Market, the AI market will grow from $420 million in 2014 to $5.05 billion in 2020. 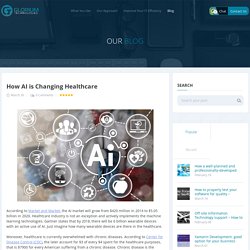 Healhtcare industry is not an exception and actively implements the machine learning technologies. Gartner states that by 2018, there will be 6 billion wearable devices with an active use of AI. Just imagine how many wearable devices are there in the healthcare. Moreover, healthcare is currently overwhelmed with chronic diseases. According to Center for Disease Control (CDC), the later account for $3 of every $4 spent for the healthcare purposes, that is $7900 for every American suffering from a chronic disease. AI has substantially improved big data analysis, for instance, Google’s Deepmind Health project. It’s been reported that from 10 to 20 percent of cases are misdiagnosed yearly. Ai also improves chatbots and virtual assistants like Baidu’s medical chatbot, Melody, that is launched to make it easier to diagnose illnesses. A.I. Versus M.D. One evening last November, a fifty-four-year-old woman from the Bronx arrived at the emergency room at Columbia University’s medical center with a grinding headache. 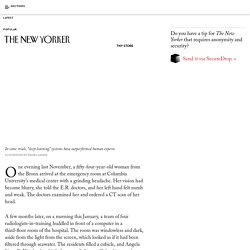 Her vision had become blurry, she told the E.R. doctors, and her left hand felt numb and weak. The doctors examined her and ordered a CT scan of her head. A few months later, on a morning this January, a team of four radiologists-in-training huddled in front of a computer in a third-floor room of the hospital. The room was windowless and dark, aside from the light from the screen, which looked as if it had been filtered through seawater.

The residents filled a cubicle, and Angela Lignelli-Dipple, the chief of neuroradiology at Columbia, stood behind them with a pencil and pad. “It’s easy to diagnose a stroke once the brain is dead and gray,” she said. She glanced at a clock on the wall, as the seconds ticked by. Strokes are typically asymmetrical. “Hazy?” The resident fumbled for words. We discussed the black-box problem. Should we tax the robot that will take your job? Innovation in AI could see governments introduce human quotas, study says. Innovation in artificial intelligence and robotics could force governments to legislate for quotas of human workers, upend traditional working practices and pose novel dilemmas for insuring driverless cars, according to a report by the International Bar Association. 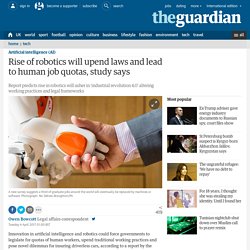 The survey, which suggests that a third of graduate level jobs around the world may eventually be replaced by machines or software, warns that legal frameworks regulating employment and safety are becoming rapidly outdated. The competitive advantage of poorer, emerging economies – based on cheaper workforces – will soon be eroded as robot production lines and intelligent computer systems undercut the cost of human endeavour, the study suggests. While a German car worker costs more than €40 (£34) an hour, a robot costs between only €5 and €8 per hour.

“A production robot is thus cheaper than a worker in China,” the report notes. Limits, it says, will have to be imposed on some aspects of machine autonomy. Alibaba founder Jack Ma: AI will cause people ‘more pain than happiness’ Artificial intelligence and other technologies will cause people “more pain than happiness” over the next three decades, according to Jack Ma, the billionaire chairman and founder of Alibaba. 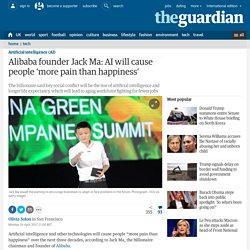 “Social conflicts in the next three decades will have an impact on all sorts of industries and walks of life,” said Ma, speaking at an entrepreneurship conference in China about the job disruptions that would be created by automation and the internet. A key social conflict will be the rise of artificial intelligence and longer life expectancy, which will lead to an aging workforce fighting for fewer jobs. Ma, who is usually more optimistic in his presentations, issued the warning to encourage businesses to adapt or face problems in the future. He said that 15 years ago he gave hundreds of speeches warning about the impact of e-commerce on traditional retailers and few people listened because he wasn’t as well-known as he is now. “Machines should only do what humans cannot,” he said.