RIAA Reported 50 Million Pirate Links to Google. The RIAA has reached a new milestone in its ongoing efforts to get pirated content removed from the Internet. 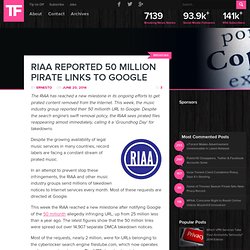 This week, the music industry group reported their 50 millionth URL to Google. Despite the search engine's swift removal policy, the RIAA sees pirated files reappearing almost immediately, calling it a ‘Groundhog Day’ for takedowns. Despite the growing availability of legal music services in many countries, record labels are facing a constant stream of pirated music. In an attempt to prevent stop these infringements, the RIAA and other music industry groups send millions of takedown notices to Internet services every month.

Most of these requests are directed at Google. News Corp Wants Google to Implement Anti-Piracy Algorithms. Following in the footsteps of the movie and music industries, media conglomerate News Corp is now going after Google over the copyright infringement issue. 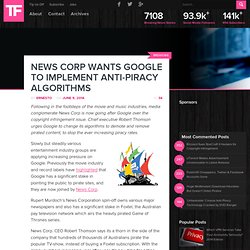 Chief executive Robert Thomson urges Google to change its algorithms to demote and remove pirated content, to stop the ever increasing piracy rates. Slowly but steadily various entertainment industry groups are applying increasing pressure on Google. Previously the movie industry and record labels have highlighted that Google has a significant stake in pointing the public to pirate sites, and they are now joined by News Corp. Rupert Murdoch’s News Corporation spin-off owns various major newspapers and also has a significant stake in Foxtel, the Australian pay television network which airs the heavily pirated Game of Thrones series. News Corp. Thomson notes that Google could easily demote links to pirate sites in their search results, and eventually remove these sites altogether. Comcast, Verizon and Co. Stop Mass Piracy Lawsuits on Appeal. Comcast, Verizon, AT&T, Time Warner and Cox have successfully appealed a district court decision ordering them to reveal the identities of 1,058 subscribers accused of pirating movies via BitTorrent. 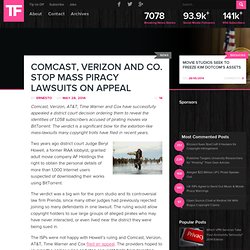 The verdict is a significant blow for the extortion-like mass-lawsuits many copyright trolls have filed in recent years. Two years ago district court Judge Beryl Howell, a former RIAA lobbyist, granted adult movie company AF Holdings the right to obtain the personal details of more than 1,000 Internet users suspected of downloading their works using BitTorrent. The verdict was a big win for the porn studio and its controversial law firm Prenda, since many other judges had previously rejected joining so many defendants in one lawsuit. The ruling would allow copyright holders to sue large groups of alleged pirates who may have never interacted, or even lived near the district they were being sued in. One of the issues at stake was that of personal jurisdiction. Are all new things a mash-up of what came before? A Q&A with Kirby Ferguson. In today’s TEDTalk, director Kirby Ferguson outlines a bold vision of creativity — that it’s not about dreaming up a new song, a new piece of art or a new form of technology in a vacuum, but instead about remixing what has come before. 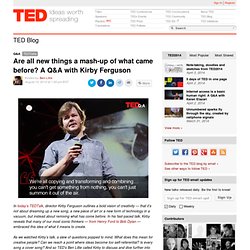 In his fast-paced talk, Kirby reveals that many of our most iconic thinkers — from Henry Ford to Bob Dylan — embraced this idea of what it means to create. As we watched Kirby’s talk, a slew of questions popped to mind. What does this mean for creative people? IN CASE YOU MISSED IT: Disney Now Owns ‘Indiana Jones’ Franchise. First Kermit the Frog, then Iron Man, then Darth Vader, and now Indy. 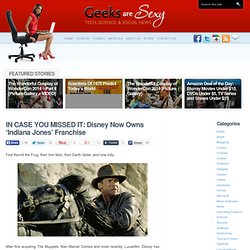 After first acquiring The Muppets, then Marvel Comics and most recently, Lucasfilm, Disney has been handed the rights of the Indiana Jones franchise from Paramount Pictures, according to Variety. Which basically means, if you’re keeping score, Disney now owns every part of your childhood. Paramount will still be in charge of the distribution for the first four “Indiana Jones” films, but now, Disney “gains distribution and marketing rights to future films, in addition to retaining the ownership rights it secured when it acquired Lucasfilm.”

Paramount will also receive financial participation regarding any future “Indiana Jones” films. The Hole in Our Collective Memory: How Copyright Made Mid-Century Books Vanish. A book published during the presidency of Chester A. 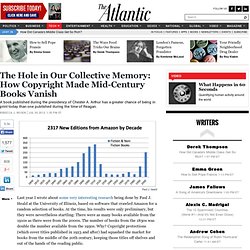 Arthur has a greater chance of being in print today than one published during the time of Reagan. Paul J. Heald Last year I wrote about some very interesting research being done by Paul J. Heald at the University of Illinois, based on software that crawled Amazon for a random selection of books. Heald has now finalized his research and the picture, though more detailed, is largely the same: "Copyright correlates significantly with the disappearance of works rather than with their availability," Heald writes. The graph above shows the simplest interpretation of the data. But this isn't a totally honest portrait of how many different books are available, because for books that are in the public domain, often many different editions exist, and the random sample is likely to overrepresent them. Heald says the picture is still "quite dramatic. " Por qué la "piratería" es beneficiosa para los músicos, y la industria discográfica no. 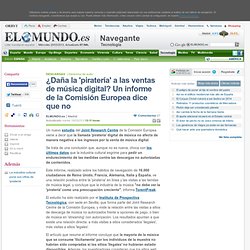