Koch-backed Group Calls for End of National Parks. Yosemite National ParkPhoto Credit: Shutterstock.com The National Park system is broke, argues Reed Watson, the executive director at the Koch-backed Property and Environment Research Center (PERC) in an op-ed, so the only thing to do about it is stop creating national parks. 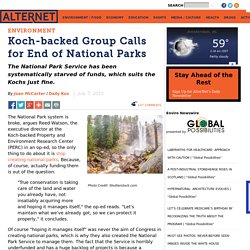 Because, of course, actually funding them is out of the question. "True conservation is taking care of the land and water you already have, not insatiably acquiring more and hoping it manages itself," the op-ed reads. "Let's maintain what we've already got, so we can protect it properly," it concludes. Of course "hoping it manages itself" was never the aim of Congress in creating national parks, which is why they also created the National Park Service to manage them. It just kills the industry and its allies that there's any scrap of land that they can't get their hands, or more precisely their drilling rigs, on.

Leading Climate Denier and Harvard Scientist Took $1.2 Million Bribe From Oil Companies. Wei-Hock Soon, an aerospace engineer and a part-time employee at the Harvard-Smithsonian Center for Astrophysics is one of the few respected scientists who spoke against the general consensus that human activity is a significant contributor to climate change. 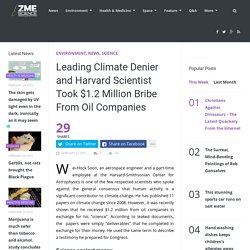 He has published 11 papers on climate change since 2008. However, it was recently shown that he received $1.2 million from oil companies in exchange for his “science”. According to leaked documents, the papers were simply “deliverables” that he completed in exchange for their money. He used the same term to describe a testimony he prepared for Congress. Science against money Climate change denial has very little credibility. Wei-Hock Soon, or “Willie” as he likes to be called is one of the very few scientists who actually claimed that climate change is not related to human activities. Gavin A. “The science that Willie Soon does is almost pointless,” Dr. 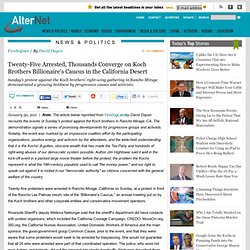 Join our email list: Stay up to date with the latest headlines via email. Note: The article below reprinted from FireDogLakeby David Dayen recounts the events of Sunday's protest against the Koch brothers in Rancho Mirage, CA. The demonstration signals a series of promising developments for progressive groups and activists. Twenty-five protesters were arrested in Rancho Mirage, California on Sunday, at a protest in front of the Rancho Las Palmas resort, site of the “Billionaire’s Caucus,” an annual meeting put on by the Koch brothers and other corporate entities and conservative movement operators. Nieburger estimated between 800 and 1,000 activists at the “Uncloak the Kochs” event.

The Beast File - Koch Brothers (HUNGRY BEAST) Koch Companies Have Received Almost $100 Million In Government Contracts. David and Charles Koch, owners of the oil conglomerate Koch Industries, are among the most influential players in the conservative movement. 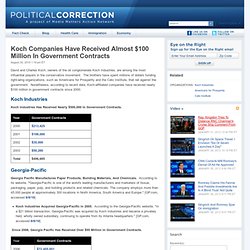 The brothers have spent millions of dollars funding right-wing organizations, such as Americans for Prosperity and the Cato Institute, that rail against the government. Nonetheless, according to recent data, Koch-affiliated companies have received nearly $100 million in government contracts since 2000. The Beast File - Koch Brothers (HUNGRY BEAST) Koch Industries Employs PR Firm To Airbush Wikipedia, Gets Banned For Unethical ‘Sock Puppets’ REPORT: How Koch Industries Makes Billions Corrupting Government And Polluting For Free (Part 2) House GOP Determined To Exceed Own Stereotypes. Walker Punked By Fake Koch Brothers Call. This is priceless. 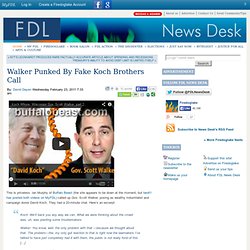 Ian Murphy of Buffalo Beast (the site appears to be down at the moment, but twolf1 has posted both videos on MyFDL) called up Gov. Scott Walker, posing as wealthy industrialist and campaign donor David Koch. They had a 20-minute chat. Here’s an excerpt: Koch: We’ll back you any way we can. Throughout the call, Walker boasts about his media appearances and strategizes with Koch. And I would argue that its existence is damning enough. And best of all, Murphy didn’t have to pretend to be a pimp or a prostitute in order to do it. So yes, Scott Walker was Breitbarted here, but I think the larger point about access is very important for people to understand. UPDATE: More from Adam Weinstein. Boycott Koch Industries – Avoid These Brands. Updated 10/14/13 In an effort to do my small part to harm the extreme right-wing efforts of the Koch brothers, I will be henceforth doing my best to avoid purchasing any and all products from Koch Industries. 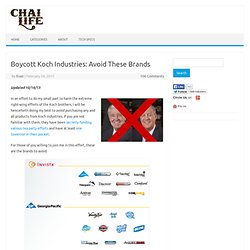 If you are not familiar with them, they have been secretly funding various tea party efforts and have at least one Governor in their pocket. For those of you willing to join me in this effort, these are the brands to avoid: A Secret Deal Between Gov. Walker And Koch Brothers Buried In State Budget? - Rick Ungar - The Policy Page. Koch Brothers Behind Wisconsin Effort To Kill Public Unions - Rick Ungar - The Policy Page.