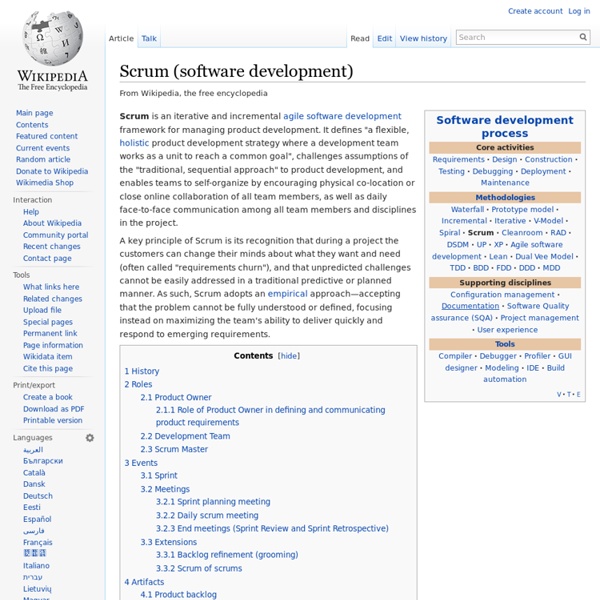 Scrum is an iterative and incremental agile software development framework for managing product development. It defines "a flexible, holistic product development strategy where a development team works as a unit to reach a common goal", challenges assumptions of the "traditional, sequential approach" to product development, and enables teams to self-organize by encouraging physical co-location or close online collaboration of all team members, as well as daily face-to-face communication among all team members and disciplines in the project. A key principle of Scrum is its recognition that during a project the customers can change their minds about what they want and need (often called "requirements churn"), and that unpredicted challenges cannot be easily addressed in a traditional predictive or planned manner. Later, Schwaber with others founded the Scrum Alliance and created the Certified Scrum Master programs and its derivatives. Each sprint is started by a planning meeting.

Best remote desktop apps for iPad: Access your Mac or PC from anywhere! In search of the best iPad apps that let you access your desktop PC or Mac from anywhere? Let's face it, sometimes as humans we can be forgetful. Ever walked into a meeting and realized that you didn't remember to transfer a document or presentation you needed to your iPad? Or perhaps you forgot to email your finished lab assignment to yourself before leaving your dorm. Remote desktop apps for iPad let you take control of your computer, or someone else's if given permission, in order to view and transfer files while on the go.

The Puf Principle: Online burndown chart generator One of the aspects of Scrum is its focus on transparency - getting all information out in the open. And one of the areas that enables the transparency is the burndown chart. It's a public posting of the progress of the team throughout its current sprint. Developer Resources Welcome to the WordPress.com REST API. Below, you’ll find a full listing of all the available endpoints. As we add more endpoints, they will be automatically documented here and available through the Developer Console. Online burndown chart generator Serving burndown charts since 2007 There was a problem processing your request. This page can be used to generate burndown chart like this and burnup charts like this Copy the image URL to see how the charts are generated. All the information to draw the chart is in the image URL.

Enormous Changes to Google Summer of Code in 2015 By Steve Burge The Google Summer of Code (GSOC) is a progam that has helped many, many open source projects. Google accepts applications from projects and provides up to $150,000 in stipends to help student developers contribute code. Since it started in 2005, Google estimates that GSOC, Introduction to Scrum - An Agile Process Scrum is an agile way to manage a project, usually software development. Agile software development with Scrum is often perceived as a methodology; but rather than viewing Scrum as methodology, think of it as a framework for managing a process. In the agile Scrum world, instead of providing complete, detailed descriptions of how everything is to be done on a project, much of it is left up to the Scrum software development team. This is because the team will know best how to solve the problem they are presented. This is why in Scrum development, for example, a sprint planning meeting is described in terms of the desired outcome (a commitment to a set of features to be developed in the next sprint) instead of a set of Entry criteria, Task definitions, Validation criteria, Exit criteria (ETVX) and so on, as would be provided in most methodologies. Scrum relies on a self-organizing, cross-functional team.

The internet mystery that has the world baffled Sleepily – it was late, and he had work in the morning – Eriksson thought he’d try his luck decoding the message from "3301”. After only a few minutes work he’d got somewhere: a reference to "Tiberius Claudius Caesar” and a line of meaningless letters. Joel deduced it might be an embedded "Caesar cipher” – an encryption technique named after Julius Caesar, who used it in private correspondence. It replaces characters by a letter a certain number of positions down the alphabet. As Claudius was the fourth emperor, it suggested "four” might be important – and lo, within minutes, Eriksson found another web address buried in the image’s code. Feeling satisfied, he clicked the link.

What Is Scrum? According to the State of Agile Survey, approximately 60 percent of projects are Agile.1 After all, Agile frameworks help companies accelerate time to market, increase productivity, and respond to changes in priorities. Of all the Agile frameworks, Scrum is the most widely adopted. Professionals from around the world and in a variety of industries are using Scrum to position their teams for greater success. Join the global movement that is transforming the world of work, and bring Scrum to your workplace. To bring Scrum out of the classroom and into practice, you'll need a Certified Scrum Coach (CSC). CSCs are experts in both the theory and practice of Scrum.