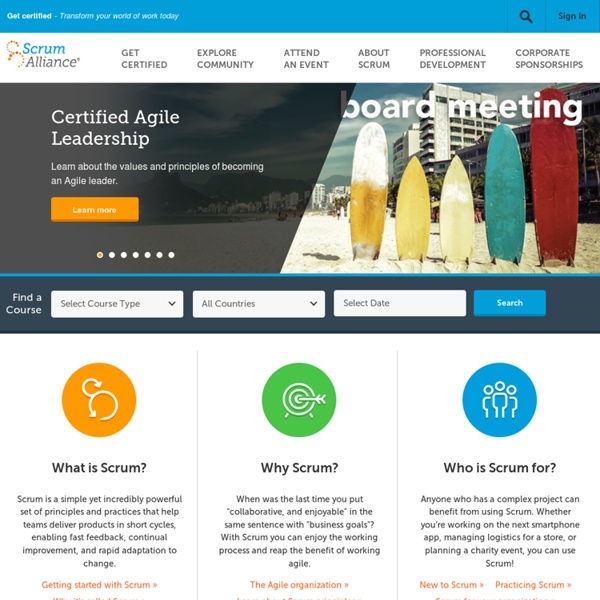 User Stories and User Story Examples by Mike Cohn What is a user story? User stories are short, simple descriptions of a feature told from the perspective of the person who desires the new capability, usually a user or customer of the system. They typically follow a simple template: As a < type of user >, I want < some goal > so that < some reason >. Distributed Scrum Teams: Never End a Sprint on Friday Scrum team members know that things get very busy near the end of an iteration. The coding and quality activities need to be wrapped up, demo preparation occurs, the sprint review is held, the sprint retrospective is held, and the next sprint planning meeting is held. If the onsite team team prefers to end iterations on Friday, they might naturally assume they have all day Friday until evening for these activities. However, look at what that would do to a remote sub-team in India – it would mean working until early hours on Saturday morning. A better practice is to split the end of sprint activities across two days, ideally during the overlap time dedicated for sub-team synchronization.

Scrum Scrum is an iterative and incremental agile software development framework for managing product development. It defines "a flexible, holistic product development strategy where a development team works as a unit to reach a common goal", challenges assumptions of the "traditional, sequential approach" to product development, and enables teams to self-organize by encouraging physical co-location or close online collaboration of all team members, as well as daily face-to-face communication among all team members and disciplines in the project. A key principle of Scrum is its recognition that during a project the customers can change their minds about what they want and need (often called "requirements churn"), and that unpredicted challenges cannot be easily addressed in a traditional predictive or planned manner.

The Burn-Down Chart: An Effective Planning and Tracking Tool Burn-downs charts are among the most common sprint tracking mechanisms used by Agile practitioners. Though their application and usage varies (some plot a burn-down chart using story points, whereas others use task count), plotting burn-down using effort remaining is the most effective and efficient way of using burn-down charts. This article looks at creating and updating a burn-down chart using the effort-remaining approach, interpreting burn-down under different scenarios, and examining common mistakes to avoid while using burn-downs. Your Family, Agile, and You: Using An Action Map To Make Sense Of The To Do List What do we do when we have a lot of tasks we need to complete? We write them down. So we start writing down the tasks and prioritizing them. But it doesn’t always work.

An Overview of the Scrum Process Scrum is a simple framework that does not demand any special tools or software. Here we explain how a project typically is run using Scrum. Product Backlog Before we can start to use Scrum on a project, there needs to be a Product Backlog. Splitting User Stories Good user stories follow Bill Wake’s INVEST model. They’re Independent, Negotiable, Valuable, Estimable, Small, and Testable. The small requirement drives us to split large stories. But the stories after splitting still have to follow the model. Many new agile teams attempt to split stories by architectural layer: one story for the UI, another for the database, etc.

Glossary of instructional strategies Current number of strategies and methods: 1271 Last updated: 27 July, 2013 Definitions written by Kelly Jo Rowan. ©1996-2013 Kelly Jo Rowan. 10 + 2 (Ten Plus Two) About Self Organizing Teams/ Posted 4/11/2016 12:05:46 PM by CLEMENTINO DE MENDONCA, Professional Scrum Trainer with Scrum.org A question from a budding Scrum Master, who is transitioning from a background as a traditional project manager: “In order to promote team bonding and self-organization, from now on I am going to try something new with the team. In the sprint planning meeting, instead of me breaking down the tasks for user stories between each team member, I am going to just identify tasks and hours needed and leave it at that, and then I will ask each team member to “pick” tasks from the sprint backlog on their own, and later, as soon as they complete a previously picked task.” He goes on to say: “The behavior I want to encourage is the following: 1.