2020 Forecast: Creating the Future of Learning 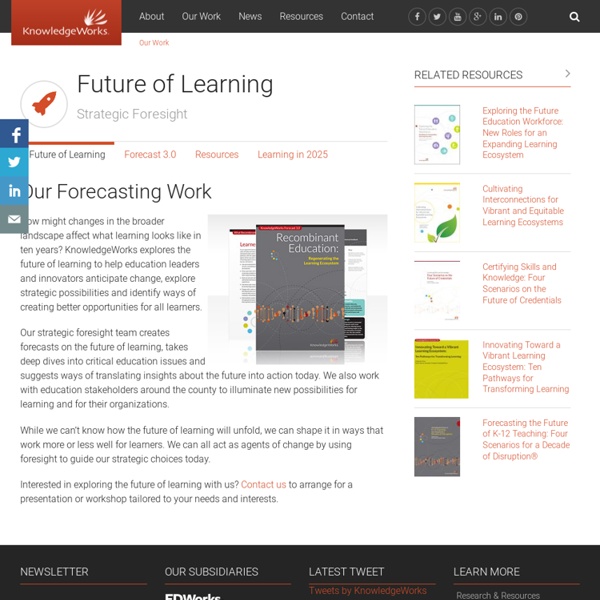 15 Free Tools for Web-based Collaboration No man (or woman) is an island – and this statement can’t be any truer if you’re a designer or developer. Though paid/subscription services like Basecamp and Zimbra are great, individuals strapped for cash have a ton of alternatives that provide similar (if not better) features. In this article, you’ll find 15 free tools to help you facilitate remote/web-based collaboration. Whether you need basic whiteboarding/brainstorming tools or fully-featured project management applications – you should be able to find a tool or two that’s worth checking out. Google Docs Google Docs is an excellent application for collaboration.

Should you pay $250K to go to college? By Jason Calacanis On April 8, 2013 I was talking with my brother recently about higher education. We both struggled our way through school, barely able to afford our approximate $40,000 in tuition and expenses over the four years (he at a state school, me at Fordham University). Now his son has been accepted to a bunch of amazing schools, and we discussed a $250,000 four-year bill. Yep, 20 years after we graduated, the same set of schools cost six times as much. Transliteracy: Crossing divides Transliteracy might provide a unifying perspective on what it means to be literate in the twenty–first century. It is not a new behavior but has only been identified as a working concept since the Internet generated new ways of thinking about human communication. This article defines transliteracy as “the ability to read, write and interact across a range of platforms, tools and media from signing and orality through handwriting, print, TV, radio and film, to digital social networks” and opens the debate with examples from history, orality, philosophy, literature, and ethnography. ContentsPrefaceWhat is transliteracy?

The Home of Building Learning Power East L.A. murals come to life in school plays Monterey Continuation High School students Christopher Lizarraras,… (Katie Falkenberg / Los Angeles…) In East Los Angeles, murals are as common and overlooked as clouds in the sky, but both take shape and significance when looked at through a different lens. A group of students from Monterey Continuation High School learned this lesson recently by writing and performing one-act plays about the wall art in their neighborhood and the muralists who put them there. About…Productions oversees the Young Theaterworks program at the school and encourages students to communicate through the arts. "We're realizing there's a living history that the students don't know about," said Rose Portillo, associate director of About…Productions. She and artistic director Theresa Chavez arranged for the students to meet with muralists Barbara Carrasco and Yreina Cervantez, and with Wayne Healy and David Botello, founders of the East Los Streetscapers, a public art studio.

Introducing transliteracy — College &amp; Research Libraries News Tom Ipri + Author Affiliations Transliteracy is recent terminology gaining currency in the library world. It is a broad term encompassing and transcending many existing concepts. Because transliteracy is not a library-centric concept, many in the profession are unsure what the term means and how it relates to libraries’ instructional mission and to other existing ideas about various literacies. National College for School Leadership About Productions: Young Theaterworks Young Theaterworks “About…Productions’ Young Theaterworks comes and challenges students – challenges them to write, to speak, to look inside themselves. Young Theaterworks offers unrelenting professionalism, dedication and belief in the potential of youth to do more, reach higher, succeed.

Transliteracy Research Group At 3Ts 2013: Transliteracy from Cradle to Career in Saratoga Springs this week I learned some new things about transliteracy. 1. In What I Want, When I Want to Watch It: Brief Thoughts on Television Literacy in the Streaming World with ﻿Hollie Miller & Michele Forte, Hollie aka @theotherinside showed us a feature on Hulu Plus which allows you to choose between adverts. That means that when the ads come on - as they invariably do - if you don't like the one they're showing, you can choose a different ad from several on offer. Very interesting ad-based literacy - I've never been asked to consciously choose my own ads before, even though I know I'm already trading off that information on many of my social media platforms. And of course, in the process, Hulu learns lots about your preferences ;)

home EdTracker: EdSource’s guide to education legislation Last year California state legislators passed the Local Control Funding Formula, transforming how schools are funded. They ended the state’s existing system of standardized testing and created a roadmap for introducing new assessments of student performance. And they approved significant funding for implementing the new Common Core standards. While collectively the raft of education bills introduced this year do not approach that level of magnitude, they do address a range of important issues: universal kindergarten for 4-year-olds, school discipline, teacher dismissal, and bachelor’s degrees at the community college level, to name a few. EdSource will focus on a number of key bills through our EdTracker, reporting their status as they go through the legislative process.

How Adaptive Learning Technology Can Help Transform U.S. STEM Education This article was co-written by Dr. Nishikant Sonwalkar and Ben Owens Many of today’s classrooms look very much like they did 100 years ago: rows of desks, students passively listening to lecture-based instruction, and a one-size-fits all method of instruction.

How Integrating Arts Into Other Subjects Makes Learning Come Alive Art has long been recognized as an important part of a well-rounded education — but when it comes down to setting budget priorities, the arts rarely rise to the top. Many public schools saw their visual, performing and musical arts programs cut completely during the last recession, despite the many studies showing that exposure to the arts can help with academics too. A few schools are taking the research to heart, weaving the arts into everything they do and finding that the approach not only boosts academic achievement but also promotes creativity, self-confidence and school pride. The arts integration experiment at Integrated Arts Academy at H.O.