Rome, Italy: Roman Forum. Italy Can't Afford to Preserve Roman Empire Ruins. When archaeologists announced the discovery of the tomb of Marcus Nonius Macrinus in Rome in 2008, the find was heralded as the most important in decades. 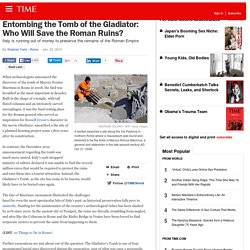 Built in the shape of a temple, with tall fluted columns and an intricately carved sarcophagus, it was the final resting place for the Roman general who served as inspiration for Russell Crowe‘s character in the movie Gladiator, unearthed a the site of a planned housing project some 1,800 years after its construction. In contrast, the December 2012 announcement regarding the tomb was much more muted. Italy’s cash-strapped ministry of culture declared it was unable to find the several million euros that would be required to protect the ruins and turn them into a tourist attraction. Instead, the Gladiator’s Tomb, as the site has come to be known, would likely have to be buried once again. (LIST: 10 Things to Do in Rome) Further excavations are just about out of the question. (MORE: A Bridge Too Far?

'The dictator who failed to dictate': free-range architecture under Mussolini. “After Jerry and Joe” was the cryptic subject line of the email from Jonathan Meades to promote his latest documentary. 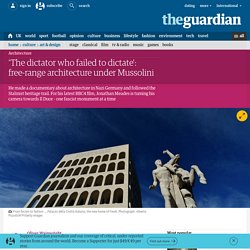 “The third and final piece on dictators’ architecture,” read the body of the message, followed succinctly by Meades’s address: Cité Radieuse le Corbusier, Marseille. A man who resides in Corb’s “machine for living in” understandably has some interest in the architecture of dictators. It’s a subject that has occupied Meades for the last 20 years. Having covered the architecture of Nazi Germany in Jerry-Building (1994), followed by the Stalinist heritage trail of Joe-Building (2006), the besuited, bespectacled critic is back with a documentary about his third and final tyrant, Benito Mussolini. It’s a trickier pitch, if only because Mussolini, at least for his first decade in power, wasn’t quite as interested in architecture as his fellow dictators. The picture Meades paints is of a battle of styles with no real winner, nor an interested audience. 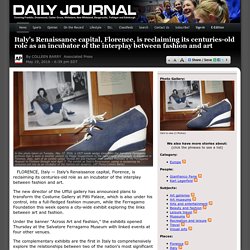 The new director of the Uffizi gallery has announced plans to transform the Costume Gallery at Pitti Palace, which is also under his control, into a full-fledged fashion museum, while the Ferragamo Foundation this week opens a city-wide exhibit exploring the links between art and fashion. Under the banner "Across Art and Fashion," the exhibits opened Thursday at the Salvatore Ferragamo Museum with linked events at four other venues. 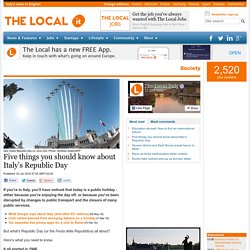 Photo: Andreas Solaro/AFP If you're in Italy, you'll have noticed that today is a public holiday - either because you're enjoying the day off, or because you've been disrupted by changes to public transport and the closure of many public services. But what's Republic Day (or the Festa della Repubblica) all about? Here's what you need to know. It all started in 1946 June 2nd, 1946, was the day Italians voted to abolish the monarchy, and the Republic of Italy was born; hence Republic Day.

After an 85-year monarchy, which had for the most part been very popular with the people, a referendum resulted in 12,717,923 votes 'for' (54 percent) and 10,719,284 votes 'against' (45 percent). Italy’s final king only ruled for one month Italy will never have another monarchy So what happened to the others? Italian President Carlo Azeglio Ciampi (R ) meets Prince Victor Emmanuel (L) in 2003. Republic Day changed dates for 24 years There’s a lot going on to celebrate. Visit Italy - 10 Things That Will SHOCK You About Italy. History of Italian fashion. Milan Fashion Week. Sicilian mafia try to assassinate head of national park in night-time ambush.

Italian 397: Italian Food in Practice: A Hands-On Cultural History. Handicraft in Italy – What will survive and what will disappear. Between wine and hats there’s sometimes a connection: tradition and craft production. 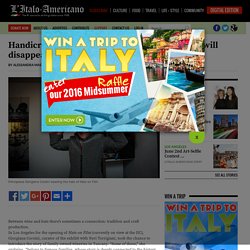 In Los Angeles for the opening of Hats on Film (currently on view at the IIC), Giorgiana Corsini, curator of the exhibit with Neri Torrigiani, took the chance to introduce the story of family owned wineries in Tuscany. “Some of these,” she explains, “belong to famous families, whose story is deeply connected to the history of the Tuscan Region.” Including her own. “Our wine is a handicraft product, because it is made with hands.

This makes our wine completely different form the industrial production. But not all the craft productions seem to go towards the same directions. “I’m a pessimist, and I see the small artisans suffocated by taxes and by the competition with low quality products, which of course are much cheaper. It is true, more and more people have chosen to dedicate to the artisan labor or to the small production of handicraft.