Brexit could lead to 1.2% fall in Irish GDP, OECD warns. The Government should resist any temptation to add to planned tax cuts or spending increases due to the risk of overheating in the economy, the OECD has warned. 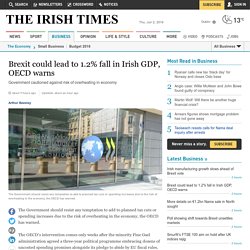 The OECD’s intervention comes only weeks after the minority Fine Gael administration agreed a three-year political programme embracing dozens of uncosted spending promises alongside its pledge to abide by EU fiscal rules. Although the new Government has already pledged to deepen tax cuts and boost spending, the OECD said policy should aim to make growth more sustainable and inclusive. Gross domestic product growth was forecast to moderate to 5 per cent in 2016 from 7.8 per cent in 2015 and to moderate further in 2017 to 3.4 per cent. “Fiscal policy is projected to be somewhat less contractionary than in past years, reflecting higher expenditures planned by the authorities, including a fiscal package of €1.5 billion for 2016.” the OECD said. 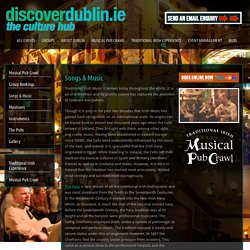 It is an oral tradition and its prolific nature has captured the attention of listeners everywhere. Though it is only in the past two decades that Irish Music has gained such recognition on an international scale, its origins can be traced back to almost two thousand years ago when the Celts arrived in Ireland. They brought with them, among other skills and crafts, music. Having been established in Eastern Europe since 500BC, the Celts were undoubtedly influenced by the music of the East, and indeed, it is speculated that the Irish Harp originated in Egypt.

While travelling to Ireland, the Celts left their mark on the musical cultures of Spain and Brittany (Northern France) as well as in Scotland and Wales. Traditional Irish Clothing - How Irish Traditions Work. Ireland's tumultuous history affected every bit of the island's culture, including clothing fashions. 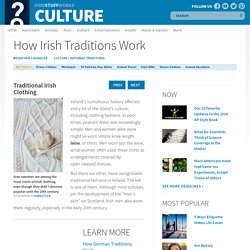 In poor times, peasant dress was exceedingly simple. Men and women alike wore might've worn simple knee-length leine, or shirts. Men worn just the leine, while women often used these shirts as undergarments covered by open-sleeved dresses. But there are other, more recognizable traditional fashions in Ireland. The Irish Times. Voices - Multilingual Nation. Types of Irish Dance - Set, Ceili and Step Dancing. Although the dances have seen changes in popularity and styles, their energetic steps are captivating and continue to be shared. 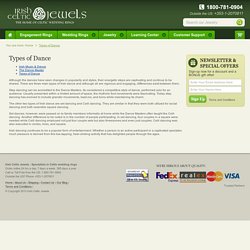 There are three main types of Irish dance and although all are vigorous and engaging, differences exist between them. Step dancing can be accredited to the Dance Masters. Its considered a competitive style of dance, performed solo for an audience. Usually presented within a limited amount of space, the rhythmic foot movements were fascinating. Today step dancing has evolved to include grander movements, lead-ins, and turns while maintaining its charm. The other two types of Irish dance are set dancing and Ceili dancing. Set dances, however, were passed on to family members informally at home while the Dance Masters often taught the Ceili dancing.

Irish dancing continues to be a popular form of entertainment. Welcome - Dublin Horse Show - 20-24 July, 2016. Living in Ireland. Irish culture and Irish customs - World Cultures European. Irish Recipes. Ireland and Irish Food - The Food and Cooking of Ireland. Outside of Ireland, Irish food is often mistakenly thought to consist of nothing more than potatoes and mutton. 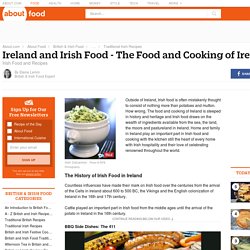 How wrong. The history of Irish cuisine - over 8,000 years old and hardly any potatoes. The first settlers arrived at Ireland’s coasts in 8000 BC, but the potato only arrived in Europe some 400 years ago. 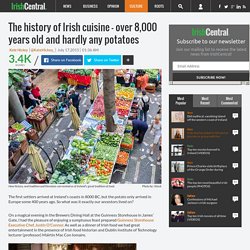 So what was it exactly our ancestors lived on? On a magical evening in the Brewers Dining Hall at the Guinness Storehouse in James’ Gate, I had the pleasure of enjoying a sumptuous feast prepared Guinness Storehouse Executive Chef, Justin O’Connor. As well as a dinner of Irish food we had great entertainment in the presence of Irish food historian and Dublin Institute of Technology lecturer (professor) Máirtín Mac Con Iomaire. With snippets of food history, bardic recitation and even a song, Mac Con Iomaire stirred the diners thoughts, to think of Ireland’s food and what our forefathers would have eaten. “The first people who came here were hunter gathers. “What would they have to hand? “Also there was things like wild garlic, wild watercress, myrtle berries, grouse, all kinds of wild birds all sorts of wild animals and they were all eaten.”

All about! A Brief History of Ireland. An estimated 70 million people world-wide can claim Irish heritage. 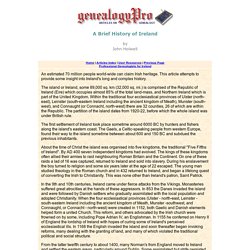 This article attempts to provide some insight into Ireland's long and complex history. The island or Ireland, some 89,000 sq. km (32,000 sq. mi.) is comprised of the Republic of Ireland (Eire) which occupies almost 85% of the total land-mass, and Northern Ireland which is part of the United Kingdom. Within the traditional four ecclesiastical provinces of Ulster (north-east), Leinster (south-eastern Ireland including the ancient kingdom of Meath), Munster (south-west), and Connaught (or Connacht, north-west) there are 32 counties, 26 of which are within the Republic.