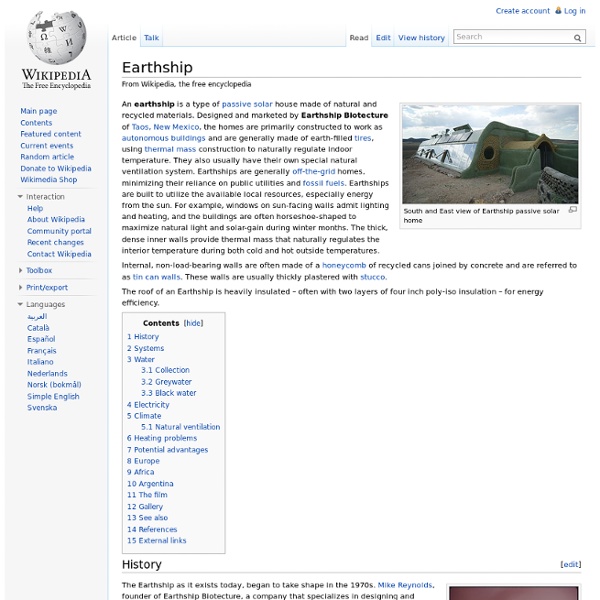 This Zero-Energy Building Uses Algae for Power and Shade In a little over a month, a new German building will be the first in the world to have a "bioreactor facade" that can create energy, provide shade, and control light. The walls facing the sun are lined with giant glass panels that act as microalgae farms: fed with water and sunlight, the tiny plants grow until they're big enough to be harvested and sent to a nearby biogas plant to generate energy. The glass panels are also designed to capture the warmth of the sun to heat the building and provide hot water.

Earthship360 Earthships can be built in any part of the world, in any climate and still provide electricity, potable water, contained sewage treatment and sustainable food production. Earthships are thermal mass homes first, passive solar homes second. Meaning: Whatever temperature goes into an Earthship, it will hold… and since it is also a Passive Solar House, it is also very tight and interacts only with the sun and the earth for heating and cooling, providing stable comfort year round in any climate. This results in being able to provide a sustainable home on property that may not be situated to the ideal of 13.5 degrees east of south. 1) Thermal/Solar Heating & Cooling Earthships maintain comfortable temperatures in any climate.

Earthship Global The upcoming Earthship Biotecture Euro Tour will present to various venues in Europe forty-five years of work developing the Earthship concept. The history, the successes, the failures, the battles, the barriers, the current state of the art. It will present the growth and development of a virtual Earthship Army… not out of design but out of unstoppable interest in this direction of thinking on this planet at this time.

Michael Reynolds And the Study of Earthship Design Home > Uncategorised > Michael Reynolds And the Study of Earthship Design posted Categories: Uncategorised The Garbage Warrior is the story that began this sustainable and off the grid revolution. When people saw that it was possible to build a home that is disconnected and still have all of the conveniences we are used to, it changed the way we think. This Mexico City Building Eats Smog For Lunch There are plenty of architects these days who are doing their best to design buildings that are energy efficient and utilize green technology. And then there’s Allison Dring and Daniel Schwaag of the Berlin-based firm Elegant Embellishments. For Torre de Especialidades, a hospital with a new tower currently under construction in Mexico City, the duo has developed a tile called proSolve370e, which will cover the façade of the building. The tile’s shape and chemical coating will help neutralize the chemicals present in the city’s smog. Yes, that’s right, this building will literally eat pollution. Dring tells TakePart that Elegant Embellishments was formed in 2006 as a kind of architectural start-up to self-initiate projects that incorporate new and often invisible technologies.

Simple Survival Earthship App - Earthship Biotecture Earthship Biotecture has been working on development of the Simple Survival concept and design for several years. We have developed a forty page set of construction drawings that have sold for $1,000 to many people all over the world. They have been able to successfully build their own Simple Survival Earthships using these drawings. They been built-in Argentina, Germany, Philippines, USA, New Zealand and the Simple Survival systems have been used in many other countries. Tomorrow's cities: How the Venus Project is redesigning the future 25 August 2013Last updated at 19:34 ET Is it possible to create a radically different society? One where material possessions are unnecessary, where buildings are created in factories, where mundane jobs are automated? Would you want to live in a city where the main aim of daily life is to improve personal knowledge, enjoy hobbies, or solve problems that could be common to all people in order to improve the standard of living for everyone?