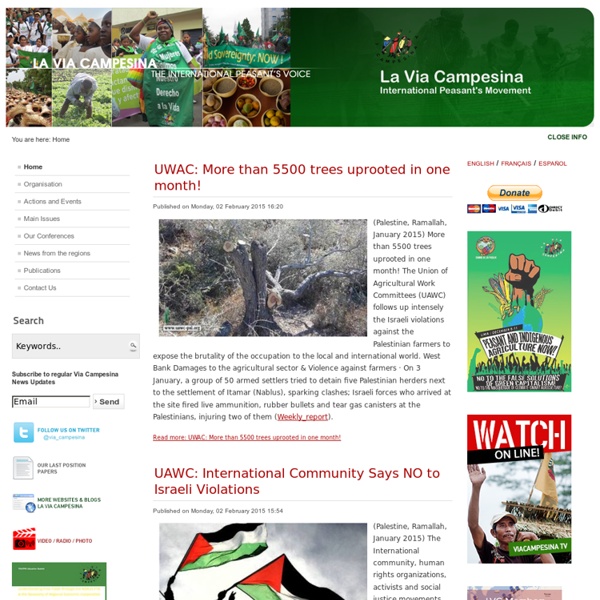 David Harvey's Course on Marx's Capital: Volumes 1 & 2 Now Available Free Online For many people, the arguments and analysis of Karl Marx’s three-volume Das Kapital (or Capital: A Critique of Political Economy) are as relevant as ever. For many others, the work is a historical curiosity, dated relic, or worse. Before forming an opinion either way, it’s probably best to read the thing—or as much of the huge set of tomes as you can manage. (Vol. 1, Vol. 2. and Vol. 3.) Few thinkers have been as frequently misquoted or misunderstood, even, or especially, by their own adherents. And as with any dense philosophical text, when embarking on a study of Marx, it’s best to have a guide. Reinstating Local Food, Local Rules NOTE: This is a guest post from Siena Chrisman, Manager of Strategic Partnerships and Alliances at WhyHunger, with excerpts from Andrianna Natsoulas’ Food Voices. In the spring of 2010, WhyHunger began a partnership with Andrianna Natsoulas, longtime food sovereignty activist and author of the forthcoming book Food Voices: Stories of the Food Sovereignty Movement. Food Voices captures the testimonies and images of farmers and fisherfolks across five countries who are fighting for a just, sustainable and sovereign food system; a food system that values quality over quantity, communities over individuals, and the environment over the corporate bottom-line. Andrianna talked to Maine farmer, and WhyHunger partner, Bob St. Peter in 2011. After traveling and living in various places in the U.S. and around the world, Bob began to reject what he viewed as a privileged culture.

How To Get Free Seeds For Your Garden Starting a garden from seed can be an expensive proposition if you're ordering online and buying from seed catalogs. A handful of harder-to-find heirloom seeds can cost as much as a frou-frou cup of coffee. Factor in shipping charges and you'll be wondering how starting a garden is supposed to save you money. Homepage I teach undergraduate and graduate courses in Community, Food and Agriculture (45% of my appointment). My research focuses on the “food system” (55% of my appointment). The food system involves all of the steps required to produce food and get it to our plates–from farming and processing to distribution and consumption. My work is unified by three main questions, (1) what changes are occurring? (2) what are the impacts of these changes on communities? (3) what can communities do to respond positively to these changes?

Poverty saps mental capacity to deal with complex tasks, say scientists Poor people spend so much mental energy on the immediate problems of paying bills and cutting costs that they are left with less capacity to deal with other complex but important tasks, including education, training or managing their time, suggests research published on Thursday. The cognitive deficit of being preoccupied with money problems was equivalent to a loss of 13 IQ points, losing an entire night's sleep or being a chronic alcoholic, according to the study. The authors say this could explain why poorer people are more likely to make mistakes or bad decisions that exacerbate their financial difficulties. Anandi Mani, a research fellow at the Centre for Competitive Advantage in the Global Economy at the University of Warwick, one of the four authors of the study, said the findings also suggest how small interventions or "nudges" at appropriate moments to help poor people access services and resources could help them break out of the poverty trap.

100 Best Permaculture & Homesteading Books: The Ultimate Reading List for Sustainable Living If you've ever considered getting into Permaculture, or if you're a veteran Permaculturist who's looking for a new skill to master, the following resources are the absolute best places for you to get started. Each of these books has the potential to introduce you to a whole new skill that you can enjoy for literally the rest of your life! You will find here links to over 60 Free eBook previews and full eBooks! Feel free to post down at the bottom if there are other books you would include on this list. Enjoy and Share with Your friends! Sophia

The City that Ended Hunger A city in Brazil recruited local farmers to help do something U.S. cities have yet to do: end hunger. posted Feb 13, 2009 “To search for solutions to hunger means to act within the principle that the status of a citizen surpasses that of a mere consumer.”CITY OF BELO HORIZONTE, BRAZIL In writing Diet for a Small Planet, I learned one simple truth: Hunger is not caused by a scarcity of food but a scarcity of democracy. Choice theory Choice theory may refer to: rational choice theory, the mainstream choice theory in economics; it's the "heart" of microeconomics non-standard theories are in their infancy and mostly the subject of behavioral economicssocial choice theory, a conglomerate of models and results concerning the aggregation of individual choices into collective choicesGlasser's choice theory, a psychological theory used in some brands of counseling

Cultivating New Farmers Related Content Sweet Carolinas Robyn finds enthusiasm for and interest in green building during a recent trip to the Carolinas. Farming is one of the most useful and satisfying occupations people can pursue.