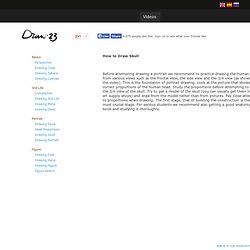 This is the foundation of portrait drawing. Look at the picture that shows the correct proportions of the human head. Study the proportions before attempting to draw the 3/4 view of the skull. Try to get a model of the skull (you can usually get them in the art supply shops) and draw from the model rather than from pictures. Pay close attention to proportions when drawing. Click to enlarge image Proportions of a human head. Sketch of a human skull. Head Proportions - How to Draw Head. If you have a model of a human skull we strongly recommend making sketches of it from different angles. 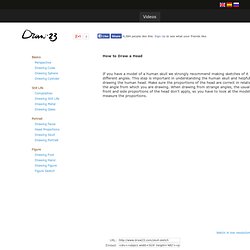 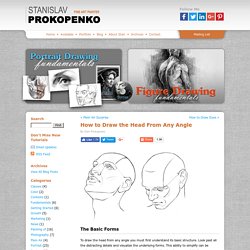 Look past all the distracting details and visualize the underlying forms. This ability to simplify can be applied to the features of the face, but when starting the drawing you could look even further. Ignore even the features and simplify to the most basic form of the head. I use a method taught by Andrew Loomis in his book, “Drawing the Head & Hands”. The head deconstructed into its basic forms, is a sphere as the cranium and a block as the jaw and cheek bones.

A Sphere as the Cranium The sides of the head are flat, so we can slice off a piece from both sides of the ball. A Block as the Jaw and Cheek Bones Attach the shape of the jaw. Constructing From Any Angle Step 1 – Determine the angle of the ball The angle of the head is established at the very beginning of the drawing with the ball. X Axis - The up and down tilt is established by the angles of the horizontal and vertical lines in the oval.